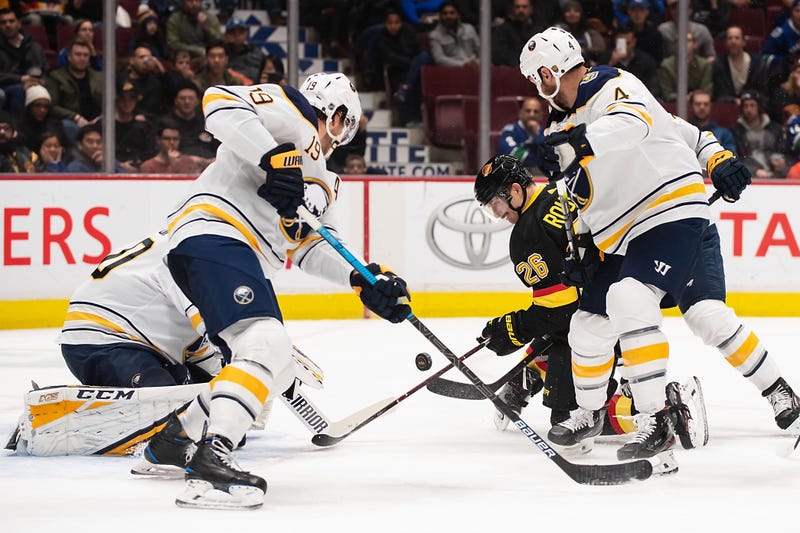 The Buffalo Sabres have not been inspiring fans as of late, as they now sit seven points back of a playoff spot in the Eastern Conference. Sabres general manager Jason Botterill joined Schopp and the Bulldog on Tuesday before the team's matchup with the Vegas Golden Knights, to try and answer questions on the recent struggles.

From trades, to prospects, to players on the team, here is some of the best from Botterill's visit:

Botterill on losing to good teams:"It's a situation where coming out of the break at Christmas time, I thought we played very well against Boston and Tampa Bay. To get zero points out of those three games was disheartening, for sure. I liked how our group responded against Edmonton and Florida. Going into St. Louis, that's a level [of play] that we still have to get to. The way I look at the league right now, there's seven or eight top teams, and everyone else can beat any body on any given night. That's what we're trying to accomplish here."

"[The New Year's Eve game against Tampa Bay] was a disheartening loss. We knew coming into the season this year they were going to be a top team. To go 0-3 against them and then going into that game, we had certainly circled that game as an important challenge for our group. I liked how we came out, got the lead from that standpoint and got some secondary scoring, which was key in that game. To let it slip, to go from a festive environment in the second period to losing the game at home, it was difficult."

Botterill on whether the playoffs are realistic:"Some teams are going to get hot, and you've seen it throughout the league. What our focus has to be is how we play, how we're doing against other teams here. I know Ralph [Krueger] has mentioned a lot about winning two out of three games here and trying to minimize things. You can't always look at the big picture. I think our group has excelled when it's tried to stay in the small picture. Our focus here now is on the next few games here, see where it goes from the break, and then materialize from there."

Botterill on young forwards in the organization:"I think Ralph has done a great job in getting the most out of Jack [Eichel] and continuing to work with Jack to expand his game. Obviously Victor Olofsson has had a great season so far. The injury hurts him, but knowing Victor and his dedication, he's certainly going to come back from that.

"Tage [Thompson's situation] is a disappointment. It's a disappointment for our entire organization just because of what we challenged Tage with in the offseason; he went through with it, there were things for him to work on specifically in Rochester and I think he did that. I thought he had a great start to the season. There were things he was working on in Rochester, I thought he did that. I thought he had a great start this season in Rochester, he came up and then had the injury. It's just something that we have to deal with, Tage has to deal with it, and the good thing is he's going to have the opportunity to have a strong summer and be ready to go next year.

"Casey [Mittelstadt] could be up here in the National Hockey League right now surviving, but we don't view that as a situation long-term for him. We view him as a player that can certainly help and add to our offensive punch. You've seen that in games like the first game of the season against Pittsburgh, out in [Los Angeles]; he has that ability, but now has to work from a consistent standpoint."

"We want to make trades. We're looking to add to our group. I don't think we've been hit from that situation, even all the way back to November.  People ask, 'are you waiting until the trade deadline for these type of deals?' No. We're open to trying to find something that can certainly add to our group, but it hasn't materialized. We'll continue to look at it, and there's no use to saying that we're close on a trade or this and that. Until it actually happens and we announce something, it's just talk. That's what we're trying to perceive with some things. It hasn't materialized, but we'll continue to look."