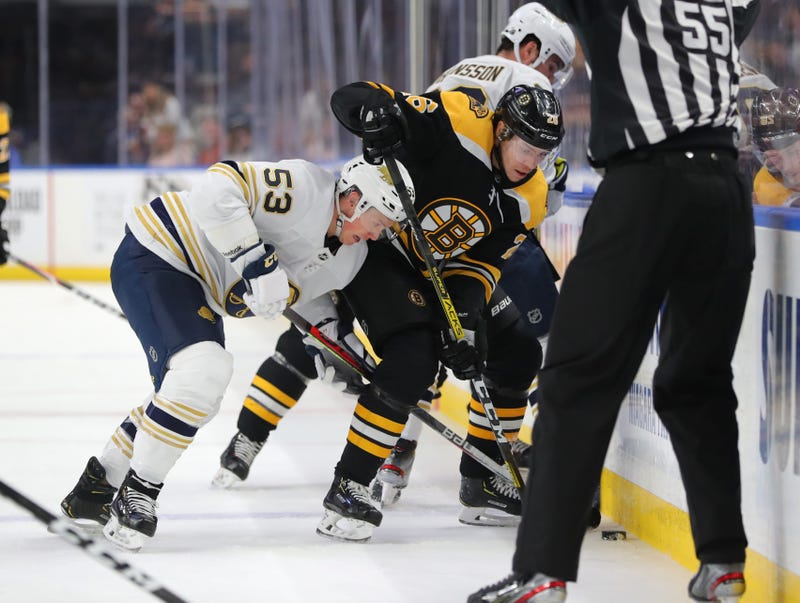 The Buffalo Sabres got shut out by the Boston Bruins, 3-0 on Friday night at KeyBank Center in their first game back from the three-day Christmas break.

Patrice Bergeron scored two goals for the Bruins, while Brad Marchand collected three assists in the win. The Sabres could not solve Bruins goalie Jaroslav Halak, who turned aside all 26 Buffalo shots in the game.

It is the first time the Sabres have been shut out since Nov. 2 against the New York Islanders. The Sabres have also only scored five goals in their last four games.

Bergeron opened the scoring when Marcus Johansson was assessed a holding penalty with 30 seconds left in the first period. Boston's power play needed all of seven seconds to get the goal from Bergeron on a brilliant set play from the Bruins on the man advantage.

Bergeron struck again late in the second period after a turnover from Jimmy Vesey resulted in a tap-in for Bergeron. Boston's second goal featured all three players on the scoresheet from the team's top line of Bergeron, Brad Marchand and David Pastrnak.

The Sabres pressed for their chances in the third period, outshooting Boston 10-5, but could not get a puck past Halak, who stayed strong in the net for Boston.

Defenseman Brandon Carlo ended up icing the game with 1:54 remaining in regulation with an empty net goal to cap off the scoring.

Sabres forward Jeff Skinner was injured in the third period and did not return. Sabres head coach Ralph Krueger told the media he will have an update on Skinner's status throughout the weekend.

The Sabres complete the second game of their home-and-home series with the Bruins on Sunday at TD Garden in Boston. Faceoff is set for 7 p.m. with the Paul William Beltz Pregame Show starting at 6:30 p.m. with Brian Koziol following Buffalo Bills postgame coverage on WGR.