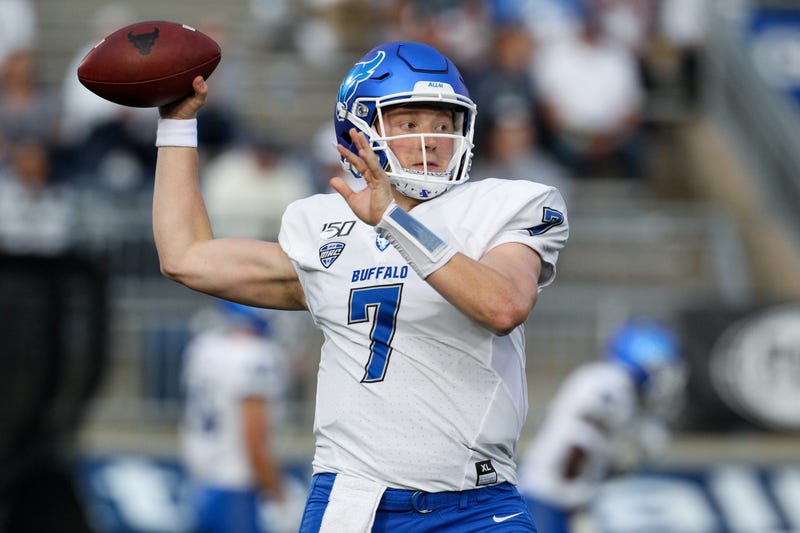 The victory also pushed the Bulls back to .500 in league play, as they’re now 2-2 in Mid-American Conference action. UB has also now put together back-to-back wins for the first time this season, as they shut Akron out 21-0 on the road last weekend.

Thanks to a few turnovers from Central Michigan, it took just one quarter for the Bulls to take control of the game. After trailing 7-3 through the first quarter of play, the Buffalo offense put up four touchdowns in the second frame and held a commanding 30-14 lead at halftime.

The Bulls’ offensive outburst all started when Buffalo defensive end Taylor Riggins recovered a fumble that was forced by linebacker James Patterson at the Central Michigan 22-yard line with 1:34 left in the opening frame. On just the second play of the second quarter, receiver Antonio Nunn made a flashy one-handed grab in the corner of the end zone to give the Bulls their first touchdown of the afternoon and a 10-7 lead.

On the ensuing Central Michigan drive, the Chippewas lost the ball once again, this time on a fumble forced by Buffalo safety Joey Banks. The senior defensive back also led the Bulls with 10 tackles and recorded an interception in the fourth quarter.

Banks’ pick came at the Central Michigan 15-yard line, putting quarterback Kyle Vantrease and the Bulls offense in a great spot to start their next drive. Buffalo wasted little time taking advantage of the favorable field position, as running back Jaret Patterson scampered into the end zone from 15 yards out on the first play of the drive. That extended the Buffalo lead to 17-7 following a successful extra point from Alex McNulty, who also nailed all three of his field goal attempts on the afternoon.

Central Michigan caught a bit of a break on their next drive. Buffalo’s Devon Russell laid a big hit on Chippewa receiver Tyrone Scott, and seemingly forced another Chippewa fumble, but the call was overturned to an incomplete pass following a long review. Despite retaining possession, the Chippewas failed to take advantage and score.

Following another stop on defense and a Central Michigan punt, the Bulls put together a six-minute, 15-play drive that covered 80 yards and was capped off by Nunn’s second reception touchdown of the game, this one being a 14-yarder. The junior pass-catcher was the Bulls' leading receiver, reeling in five grabs for 77 yards.

Central Michigan responded with a touchdown of its own, cutting the score to 24-14 in favor of UB with 1:35 left in the first half. However, 95-seconds was more than enough time for the Bulls to answer the Chippewas’ score. Buffalo went to work with a 54-yard catch and run for Jaret Patterson, breaking a few tackles in the process to get the Bulls inside Central Michigan’s red zone. Thanks to a roughing the passer penalty on Central Michigan’s Troy Hairston, the Bulls moved up to their opponent’s three-yard line. Kevin Marks ran the ball into the end zone on the very next play, putting the Bulls up 30-14 before the half.

Marks finished the game with 49 yards on 21 carries to go with his touchdown. His partner in the backfield, Patterson, turned in another dominant performance, leading the Bulls in rushing with 151 yards on 28 touches to go along with his one score.

Things didn’t get much better for the visitors in the second half. After forcing a three-and-out from the UB offense on the opening drive of the third quarter, Central Michigan’s Demarcus Governor mishandled a Jackson Baltar punt and Buffalo’s Evan Davis recovered the ball at the Chippewas’ 32-yard line.

Ironically, Alonzo McCoy got the ball back for Central Michigan when he intercepted a Vantrease pass on the very next play. In the midst of getting tackled, McCoy ended up pitching the ball back to teammate Michael Oliver, who ran it all the way to the Bulls’ end zone, but McCoy was eventually ruled down, nixing, what would’ve been, a huge confidence boost for the Chippewas.

Central Michigan didn’t end up gaining any momentum from the forced turnover. The Chippewa offense went three-and-out once again following a big sack by Riggins and was forced to punt the ball back to the Bulls.

The Chippewas had a chance to cut into the 33-14 Buffalo lead late in the third quarter after putting together a solid drive that got them inside the Bulls’ red zone. However, the Buffalo defense stood tall and came up with a big stop on a 4th-and-short at its own 18-yard line, putting a halt on any gain in momentum for Central Michigan.

Buffalo stayed the course and made sure there wasn’t any chance for a Central Michigan comeback in the fourth quarter. Linebacker Kadofi Wright put the game away when he returned an interception 40 yards to the end zone to put the Bulls up 43-20. The junior’s touchdown capped off a strong showing from the UB defense, in which the unit forced four turnovers (two interceptions and two fumbles), recorded four sacks, and forced four three-and-outs.

The Bulls are back on the road next weekend, as they’ll head to Ypsilanti for a matchup with Eastern Michigan on Saturday. Kickoff is scheduled for 12 p.m. and will be televised on ESPNU. You can also listen to the game, along with pre-game and post-game coverage, on the radio home of the UB Bulls, ESPN 1520.