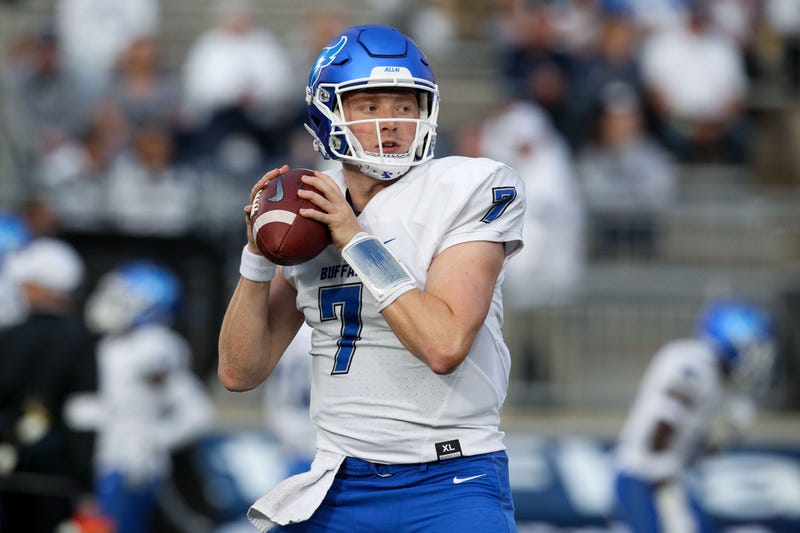 A win would’ve made the Bulls bowl eligible for a third consecutive season and the fifth time in program history. However, the Bulls’ dreams of going bowling will have to be put on hold following a 21-point fourth quarter comeback by Kent State.

Buffalo dominated for the first three and a half quarters, and, for a while, it looked like the Bulls were going to leave Ohio with their fourth consecutive victory and still have a shot at the Mid-American Conference East Division title.

The Bulls used the first quarter to establish the run game, something many suspected they would do considering Kent State has the worst run defense in the MAC, allowing 255 yards per-game heading into Thursday’s matchup. UB out-possessed the Golden Flashes 36:28 to 23:32 for the game, and held the ball for 11:25 in the first quarter.

Sophomore running back Jaret Patterson also hit the 1,000-yard rushing mark early in the first quarter, making him just the second Bull ever to post back-to-back 1,000-yard seasons, joining James Starks, who accomplished the feat in 2007 and 2008. Patterson, however, is the first UB player to rush for 1,000 yards in his first two collegiate seasons.

Thanks to a first quarter receiving touchdown from Daniel Lee, the first of his UB career, and a one-yard rushing touchdown from Kyle Vantrease early in the second quarter, the Bulls jumped out to a 14-0 lead. Joey Banks came up with a big interception at Buffalo’s eight-yard line early in the second quarter to keep Kent State off the board, and UB capitalized on the turnover with a 31-yard field goal from Alex McNulty to extend the lead to 17-0.

Kent State hit a pair of field goals before halftime, making the score 17-6 in favor of the Bulls heading into the locker room. The second Golden Flashes’ field goal was kicked as time expired in the first half after Buffalo’s Ron Cook, Jr. muffed a punt with 22-seconds left, putting Kent State in great field position to score points before the quarter ended.

UB took back control of the game in the third quarter, putting together a 19-play, 93-yard scoring drive that lasted over nine minutes and was capped-off by a two-yard touchdown run from Kevin Marks. The Bulls held the ball for an astonishing 10:46 in the third quarter and had racked up 331 yards of offense through 45 minutes of play, with 197 of those yards coming via the run.

From there, it was all Kent State.

Xavier Williams started the Kent State comeback with a seven-yard rushing touchdown to make it a two-score game with 7:39 remaining. The Golden Flashes quickly got the ball back thanks to a successful onside kick from Matt Trickett, who ended up recovering the ball himself. Just two plays later, Williams caught a screen pass from Dustin Crum and took it 41 yards to the end zone, cutting the Bulls’ lead to 27-20.

After a quick three-and-out from the UB offense, the Bulls were forced to punt from their own 25-yard line. Jackson Baltar’s punt would end up being blocked by Kent State’s Jeremiah Salaam, allowing the Golden Flashes to start their drive inside the UB 10-yard line. Four plays later, Crum found Mike Carrigan in the corner of the end zone for a five-yard passing touchdown, knotting the score at 27-27 with 4:52 to go.

The Bulls had a chance to respond, but the offense had hit a wall. Buffalo punted the ball back to Kent State with 2:15 left on the clock, setting them up for a chance to win the game. The Golden Flashes ran the clock down to the final seconds, and Trickett nailed a 44-yard field goal as time expired to shock the Bulls and bring home the victory for Kent State.

Buffalo will return to action on Wednesday, November 20 when they host Toledo at UB Stadium. Kickoff is scheduled for 7:30 p.m. You can listen to the game, along with pre-game and post-game coverage on the radio home of the UB Bulls – ESPN 1520.