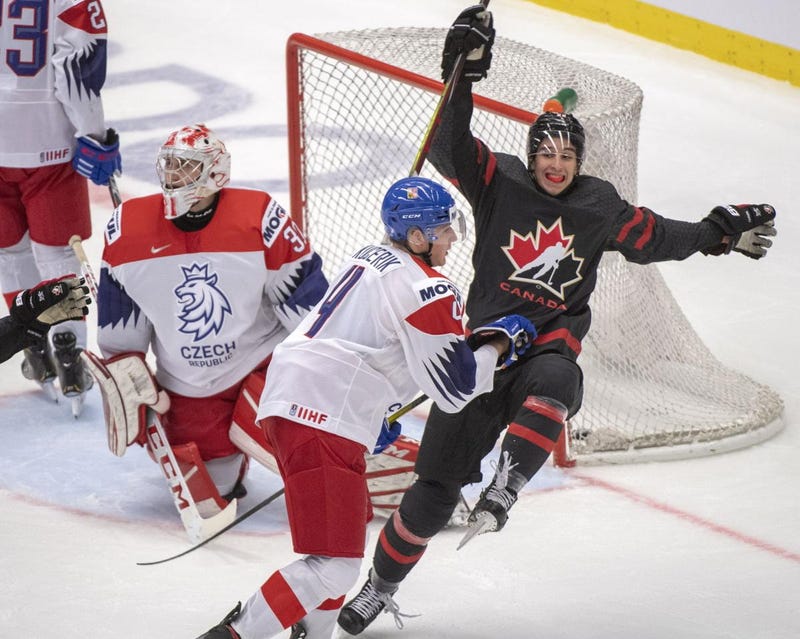 Unlike previous days of surprising upsets and close matchups at the 2020 IIHF World Junior Championship in the Czech Republic, the final day of preliminary action saw a number of games that went in favor of some of the powerhouse countries of the tournament.

Perhaps the feature game of the day came in Ostrava in Group B action between Canada and the host Czech Republic, with the chance for Canada to claim the top spot in the Group B standings.

Canada struck early and often in this game, and took advantage of the Czechs' discipline issues throughout this contest.

After a high sticking penalty to Czech forward Otakar Sik a little over four minutes into the game, Canadian alternate captain Joe Veleno (Detroit Red Wings) converted on a Barrett Hayton (Arizona Coyotes) rebound to the left of goalie Lukas Parik (Los Angeles Kings) to give Canada the 1-0 lead.

More than three minutes later, Buffalo Sabres prospect Matej Pekar was penalized for a high stick to give Canada another man advantage. With two seconds remaining in the power play, Canada converted again as Nolan Foote (Tampa Bay Lightning) fired a bullet to the top corner of the net by the glove hand of Parik.

Things came unraveled for the Czechs nearly four minutes later as Sik to exception to a cross check from defenseman Bowen Byram (Colorado Avalanche) and ended up slashing him between the legs. That earned Sik a five-minute major for slashing and a game misconduct, giving Canada five minutes straight on the man advantage.

Canada was able to strike twice on that power play chance with goals from Hayton and Connor McMichael (Washington Capitals) to open the flood gates.

Hayton scored 20 seconds into the man advantage as he was able to just get a shot over the goal line to extend the lead to 3-0. After the play was originally called a no goal, a lengthy review determined that the shot got past Parik as he was sprawled across the goal crease at an attempt to make the save.

Buffalo Sabres prospect Dylan Cozens picked up the primary assist on the goal as he set up Hayton to the left of the Czech net.

One minute later, McMichael upped the Canadian lead to 4-0 as he stuck with a loose puck in front of the Czech net and put in a rebound chance. Also stationed in front of the net was Cozens, who got a whack at the Hayton rebound and was credited with the primary assist.

On the same play, Parik attempted to come across to make the save on McMichael and got his leg awkwardly caught under him and was forced to leave the game due to injury. That forced backup Nick Malik (2020 NHL Draft) into the Czech crease for the rest of the game.

It took until the second period for the Czech Republic to get on the board with a power play goal of their own. At the 11:10 mark of the period, Vojtech Strondala was able to capitalize on a rebound chance in front off a shot from defenseman Simon Kubicek (2020 NHL Draft).

The Czechs closed the gap just 14 seconds later as defenseman Libor Zabransky joined an offensive rush and fired a wrist shot past the blocker of Canadian goalie Joel Hofer (St. Louis Blues) to cut the deficit to 4-2.

However, the momentum lasted all but 10 seconds as an unlucky bounce ended up going Canada's way. After a dump in by defenseman Ty Smith (New Jersey Devils) at center ice, the puck ended up hitting a stanchion in the glass and bouncing off the side of the net and to Liam Foudy (Columbus Blue Jackets), who put the puck into a wide-open net.

The Czechs ended up challenging the goal, but the call stand and the team was assessed another penalty.

It took just 56 seconds into the power play for Cozens to score his first goal of the tournament for Canada. While camped in front of the Czech net, the 18-year-old was able to get a piece of a point shot from defenseman Calen Addison (Pittsburgh Penguins) to put the Canadians up 6-2.

ANOTHER @HockeyCanada goal tipped in by @BuffaloSabres draft pick @Dylan_Cozens to extend their lead to 6-2! #WorldJuniors @WHLHurricanes pic.twitter.com/5RbtMZFN7O

Cozens was able to chip in on Canada's seventh goal of the game in the third period as he got the puck back to the point to defenseman Jared McIsaac (Red Wings), who fired a shot through a screen and beat Malik on the blocker side.

The Sabres prospect ended the day with a goal and three assists to up his point total to six points (1+5) through four games. His performance also earned him the Best Player honors for Canada, where he registered three shots on goal and a plus-2 rating in 15:44 of total ice time.

As for Pekar, he was utilized a bit more in the loss with a short Czech bench, playing in 12:56 of total ice time with two shots on goal and a plus-1 rating.

The 7-2 win for Canada sealed their spot as the top team in the Group B standings, which guaranteed their matchup with Slovakia in the quarterfinal round on Thursday in Ostrava.

With the loss, the Czech Republic finished fourth in Group B, which has led to a matchup with the top team in Group A, Sweden in the quarterfinals.

Earlier in the day in Ostrava, Russia was able to avoid the relegation round thanks to a 6-1 win over Germany. The Russians used a pair of two-goal efforts from Kirill Marchenko (Blue Jackets) and Pavel Dorofeyev (Vegas Golden Knights) and a 22-save effort from goalie Yaroslav Askarov (2020 NHL Draft) to a third place finish in Group B.

The Russians advance to the quarterfinals to take on Switzerland in Třinec, while Germany will have to play to stay in the Top Division of the tournament in the relegation round against Kazakhstan.

Over in Group A, Sweden was able to cap off its round robin play with its 52nd consecutive win in the preliminary round in a 6-2 thrashing of Slovakia in Třinec. Sweden got a two-goal effort from Alexander Holtz (2020 NHL Draft), and also got another goal from Samuel Fagemo (Kings), who leads the tournament with six goals through four games.

Sabres prospect Erik Portillo was able to dress for this game for the Swedes, however, he served as the backup to Hugo Alnefelt (Lightning), who turned aside 16 of 18 Slovak shots in the game.

In the other Group A game on Tuesday, Switzerland was able to stun Finland with a 5-2 win in Třinec to take the second spot in the group standings.

With the game tied at 2-2 late in the second period, a Finnish turnover at center ice set up Switzerland the take the lead as forward Fabian Berri scored his second goal of the game with a wrist shot from the top of the right faceoff circle that beat goalie Justus Annunen (Avalanche) over the far blocker side.

The Swiss earned some comfort room just past the halfway point of the third period as forward Simon Knak (2020 NHL Draft) re-directed a pass from captain Tim Berni (Blue Jackets) from the slot to make it a 4-2 score.

The Finns ended up outshooting the Swiss 38-22 overall in the game, but still could not solve goalie Stephane Charlin, who turned away 36 shots to earn the win.

With the loss, Finland finished third in Group A, which lands them with a quarterfinal matchup with the United States on Thursday in Třinec.

Here is a look at the quarterfinal matchups:

The Team USA-Finland matchup on Thursday will be a rematch of the 2019 IIHF World Junior Championship gold medal game that saw Finland come away with the gold thanks to a late third period goal from current New York Rangers forward Kaapo Kakko.

This year's Finnish team may not be as loaded with talent as the team that won gold in 2019, but this year's team still has the firepower to upset the Americans in the quarterfinals.

Arguably the team's strength is its defense led by Ottawa Senators 2019 first round pick, and team captain Lassi Thomson. The blue line also features returning players like Ville Heinola (Winnipeg Jets), Anttoni Honka (Carolina Hurricanes) and Toni Utunen (Vancouver Canucks) that has been very solid for the Finnish group for the entire tournament.

Up front, Finland's leading offensive threat is Patrick Puistola (Hurricanes), who scored four goals and registered seven points in their four preliminary games. Also tied with Puistola in scoring is Kristian Tanus, who has two goals and five helpers for the Finns. Other offensive threats for the Finland includes Joonas Oden, Antti Saarela (Chicago Blackhawks), Sampo Ranta (Avalanche), and the Räty brothers of Aku (Coyotes) and Aatu (2020 NHL Draft).

In net, Annunen has carried a majority of the load for the Finns, and is likely to continue that trend into the quarterfinals. In three starts for Finland, Annunen is 1-1-1 with a 2.62 goals-against average and a .916 save percentage.

As for the Americans, they will continue to look to their solid two-way play to get past the Finns and into the semifinal round for a fifth-consecutive year.

Although he has yet to score a goal in the tournament, forward Trevor Zegras (Anaheim Ducks) leads the tournament in scoring with nine assists in four games. Also carrying the offensive production for the Americans has been Shane Pinto (Senators) and Arthur Kaliyev (Kings), who are tied for the team lead in goals with four.

The U.S. blue line has been relatively reliable along the way, led by Sabres prospect Mattias Samuelsson, who has averaged 19:11 of total ice time in the tournament. While Samuelsson has been held off the scoresheet, he has been a solid two-way player for the the Americans.

Other defensemen who have had some good performances for the Americans this year includes Zac Jones (New York Rangers), K'Andre Miller (Rangers), and Jordan Harris (Montreal Canadiens).

Where the U.S. may have the biggest strength of the tournament is in goal with Spencer Knight (Florida Panthers), who has earned two big wins for the Americans over the Russians and the Czech Republic. In three games played, Knight has a 2-1-0 record with a 2.96 goals-against average and a .895 save percentage. While the numbers do not look so great, Knight is, arguably, the highest-touted goalie in the tournament, and will be relied upon to be an anchor for the United States moving forward.

Here is how I believe the rest of the tournament will play out: