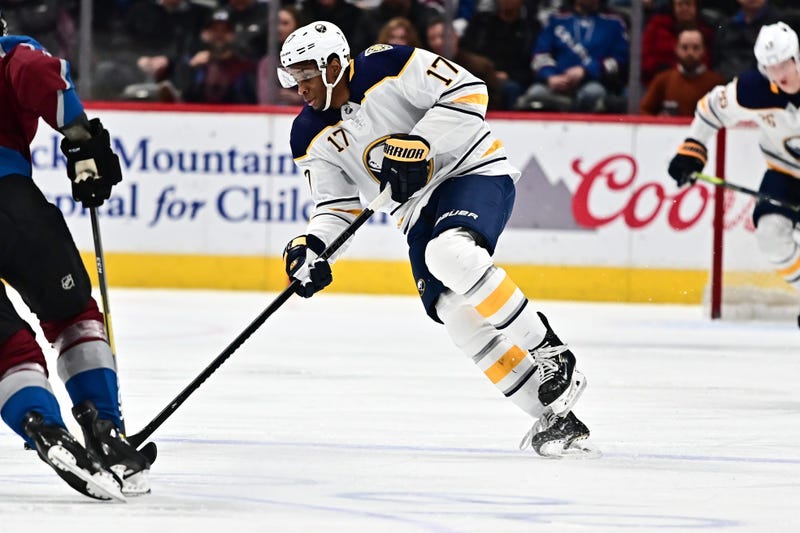 The Buffalo Sabres got right back to practice on Thursday following their 3-2 loss to the Colorado Avalanche on Tuesday night.

It was a spirited practice at T-Mobile Arena in Las Vegas, where Dominik Kahun skated on a line for the first time since being acquired by blue and gold from the Pittsburgh Penguins.

Tuesday’s result was the same, but the effort and competitiveness against Colorado was much better than the meeting in Buffalo earlier this month. The Sabres were aggressive and, at times, the better team against the Avalanche, putting them back on their heels and on the defense. That was not the case in the 6-1 loss to Colorado earlier this season at KeyBank Center on Feb. 4.

Head coach Ralph Krueger continued to express that sentiment following the team’s skate off the Vegas Strip on Thursday. He continued that, “we feel confident right now, we believe in our game and we’re expecting another good one, but as we all know that only the result in the end counts at this time of year.” The difference in the game was special teams and the pair of power play goals that Colorado scored against Buffalo.

Colin Miller agrees with his bench boss, adding that, “the majority of what we do is we’re always trying to focus on our own game, so, I’m not too sure how much [of it] that is.” Miller continued, “it’s great for us maybe as a little bit of a confidence booster.”

Vegas shut out the Edmonton Oilers on Wednesday night, with Marc-Andre Fleury making 29 saves for his fifth shutout of the season. The Golden Knights have now won seven straight games dating back to Feb. 15 against the St. Louis Blues. Miller knows the team well, having played for Vegas in each of the first two years of the franchise. He believes that, “they’re a playoff team, and they’re the teams that we’re gonna have to beat here if we wanna get in the playoffs as well.” The rear guard appeared in 147 games for the Golden Knights in his two seasons.

Kyle Okposo did not skate on Thursday and was given a maintenance day to be ready for Friday night’s game, according to Krueger. The head coach also said that the reason for sending John Gilmour down to Rochester was to get the defenseman back in games. Earlier in the day, the team announced that it had recalled Lawrence Pilut in Gilmour’s place. The final decision on the game night roster against the Golden Knights will be known on Friday.

Krueger said on Thursday that there will be different players used on the penalty kill starting on Friday. The Sabres did not work on special teams on Thursday, but did work on passing and moving the puck up and down the ice with regular line combinations. The top forward line for the blue and gold remained unchanged, while Michael Frolik took Okposo’s spot on the wing at practice.

The line combinations at practice were: