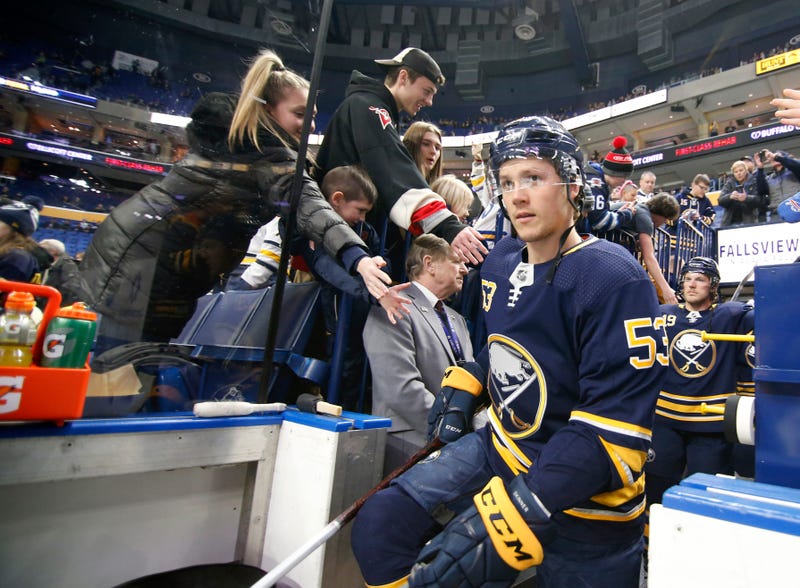 The NHL Trade Deadline is closing in on Monday, February 25 at 3 p.m. EST. Teams around the league will have until then to make deals to either boost their roster for a playoff run, or trade away players to acquire future assets.

For the first time in a long while, it appears as though the Buffalo Sabres are in a position where they will not be making moves to ship off any players to acquire young prospects or draft picks. As of Friday, the Sabres currently sit at 28-21-7 with 63 points in the Eastern Conference standings, which is four points back of the Pittsburgh Penguins for the final Wild Card spot.

The only asset the Sabres could trade away to this season that would garner a considerable return from another team is winger Jeff Skinner. The 26-year-old is currently playing in the last year of his contract, and is on pace for a career-year in his first season with the Sabres. Through 56 games, Skinner has 34 goals and 17 assists for 51 points. That's an 82-game pace of 50 goals and 25 assists for 75 points, which would, by far, surpass most of Skinner's career-high numbers set back in the 2016-17 season.

However, the Sabres' goal, to this point, has been to try and get Skinner locked up to a long-term contract extension before he becomes an unrestricted free agent on July 1.

TSN hockey insider Darren Dreger says that while the trade deadline quickly approaches, it does not seem like the Sabres and Skinner's representatives are in a hurry to get anything signed.

"I don't get the sense that there's a rush [to get a deal signed]," Dreger said with Andrew Peters and Martin Biron on The Instigators on Friday. "The trade deadline always makes sense to get your pending unrestricted free agents signed by, but, in saying that, as long as there's a healthy dialogue back and forth and there's a mutual interest, a meaningful attempt to get something done, then it's ok to go beyond the trade deadline and deal with things as they come and focus on getting the deal done when it feels right to get it done. I believe that's exactly where Buffalo and Jeff Skinner are at this moment."

Dreger has been pretty locked in on the Skinner situation with the Sabres since the talks of negotiations started earlier in the season. From the start, the Sabres have wanted to take their time with getting a deal done with Skinner in order to let him get comfortable with the city and the team.

Dreger continues to get the sense that the team will continue to take their time and let things play out, and eventually both sides will come to terms if they want to.

"It's possible they can get a contract extension worked out before February 25th, but I don't think either side is feeling any sense of urgency," Dreger said. "If I'm the 'glass half-empty' fan, that makes me nervous... Skinner has trade protection so it's not as easy as just moving an asset, but let's just say things were to go awry after February 25th, to see a piece like that walk into the unrestricted free agent market and get nothing back in return, that is a hard pill to swallow.

"I'm not predicting that's going to happen. I'd be shocked if that happens. There's not a lot of intelligence coming our of Newport [Sports Management] or out of Buffalo specific to this, they don't want to do a play-by-play on this negotiation, but my sense is that both sides are comfortable that they are going to get something done. That might be a glimmer of hope and good news there."

Buffalo acquired Skinner back in early August in a blockbuster trade with the Carolina Hurricanes. Since the trade, Skinner has openly said that he enjoys the city of Buffalo, and has loved his time playing with this team.

Dreger says that things would likely be different if Skinner was not happy with his situation and was wanting to hit the open market once the summer rolled around.

"If the team felt that there was going to be a struggle to get something done at any point in-season or after the season, I think that we'd have learned more about that side of the story, and maybe then they would've been pushing a little bit harder to consider the potential of a trade or kind of work with a player in this case. All of that is highly unlikely, at best,and I believe that both sides are ok with the process and how the negotiations are going. They're just not at a point yet where they're willing to close on it and completely sign off on it," Dreger said.

"Sometimes these negotiations, even with pending unrestricted free agents, do take a little bit longer to close on, but that doesn't mean that there's hurdles, they're struggling or that they're chewing on this or that. It's just part of a process. As long as Jeff Skinner continues to play as well as he has, I'm pretty sure that [general manager] Jason Botterill and the Buffalo Sabres are going to do everything they can to make sure he stays there."

You can listen to the entire interview below:
Coverage on the NHL Trade Deadline on WGR is presented by The Ideal You Weight Loss Center.