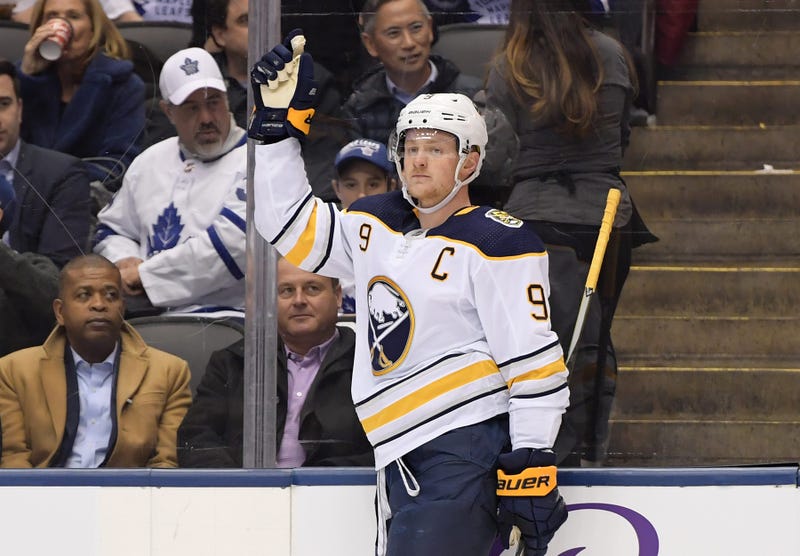 Buffalo Sabres captain Jack Eichel was back on the ice for practice on Friday after missing Thursday night's matchup with the Philadelphia Flyers due to an upper-body injury.

Eichel was a participant in the morning skate and in the pregame warmup before being a late scratch to the lineup with an upper-body injury. It was the first game he has missed the entire season, and it also snapped his career-long 17-game point streak.

Eichel was back at practice on Friday skating with his usual linemates Sam Reinhart and Victor Olofsson.

Shortly before the game on Thursday, TSN hockey insider Darren Dreger reported that Eichel likely sat out due to the flu. However, Eichel did not say it was a sickness that kept him out. All he would say was it was an upper-body injury that forced him out.

"It's obviously frustrating. You never want to not be on the ice with the team," Eichel said following practice on Friday. "I'm a competitive guy. I want to be out there every night, but I just thought it was the best for me at that time [to sit out].

The 23-year-old said that he felt pretty good on the ice, and that he'll if he can play Saturday afternoon's matchup with the Los Angeles Kings at KeyBank Center.

Sabres head coach Ralph Krueger said after practice that Eichel's prognosis is day-to-day, and that the staff will make the call on Saturday morning as to whether or not he will return to the lineup. However, he did not elaborate on what happened with Eichel that led him to be the late scratch.

Eichel was one game away from tying Gilbert Perreault's franchise record 18-game point streak before sitting out of Thursday's contest. He said that he was disappointed that the streak had to come to an end, even though he did not have the chance to match the feat.

As for other injury news from Friday's practice, Evan Rodrigues was back on the ice after leaving Thursday's game with a lower-body injury. The Buffalo forward took a shot off the back of the leg in the third period of the team's 6-1 loss to the Flyers.

"It obviously got me in a spot with no protection," Rodrigues said of the shot that hit him. "On set, it kind of went numb, but as the night went on and overnight and this morning, it's been feeling better, and I'm good to go.

"It didn't feel good right away. I couldn't feel my foot at all. But again, it came back and everything's good. I'm good to go."

Rodrigues is, arguably, off to the worst start of a season in his career with just two assists in 20 games played this year. The 26-year-old has not registered a point since Nov. 14 against the Carolina Hurricanes, and has not scored a goal since last season on March 17.

While the offense has not been going Rodrigues' way, he is trying to push through the struggles and get back on track by getting other areas of his game in check.

"It's not going the way I want it to, but you kind of got to get out of your own head a bit and just play. These kind of things happen. You see it around the league; look at a guy like [Ottawa Senators forward Anthony] Duclair, who this year is having a huge year after bouncing around a little bit before that. It's just one of those years, but at the same time, there's a lot of hockey to go. You just have to believe in yourself, and continue to push, continue to fight and do all the little things right and the offense will come."

Rodrigues was back centering a line at practice with Jimmy Vesey to his left and Conor Sheary to his right.

Krueger said that Rodrigues is in a similar situation to Eichel, where he is day-to-day and he will be evaluated on Saturday morning before being given the okay to play. However, Krueger did say that the assessment of Rodrigues on Friday did look good.

Johan Larsson is not going to be in the lineup for the Sabres over the next couple of games.

The 27-year-old suffered an upper-body injury late in the first period of Thursday's loss in Philadelphia. Krueger said that he will be out for at least the next two games before the Christmas break, and he hopes that it is only a one week injury.

"He'll definitely miss the next two games," he said. "It's an upper-body that we think we can manage in the near future."

Larsson has had a very nice bounce-back season in 2019-20 after a 2018-19 season which had many thinking that his future in Buffalo was in doubt. Through 33 games this year, Larsson has four goals and eight assists for 12 points, and is on pace for a career-high 28 points.

"It's a new bruise. It's obviously nothing that serious, but he's a tough guy. He worked and tried to go through it yesterday, but we found it was better to pull him."

The Sabres' penalty kill on Thursday struggled mightily against the Flyers, giving up three power play goals on five attempts. Defenseman Zach Bogosian is known for his penalty killing prowess, and was skating on a pair with Rasmus Dahlin at practice. While no details were given about the lineup for Saturday, we could see Bogosian re-enter the lineup after sitting out the last four games as a healthy scratch.

Earlier on Friday, the Sabres called up forward Curtis Lazar from the Rochester Americans. He slotted in to Larsson's empty roster spot, centering Zemgus Girgensons to his left and Kyle Okposo to his right.

Here's how the lines looked on Friday:

Tune in Saturday for pregame coverage starting at noon on WGR with Brian Koziol, where you will hear more from Krueger, Eichel, Rodrigues, and Rasmus Asplund.