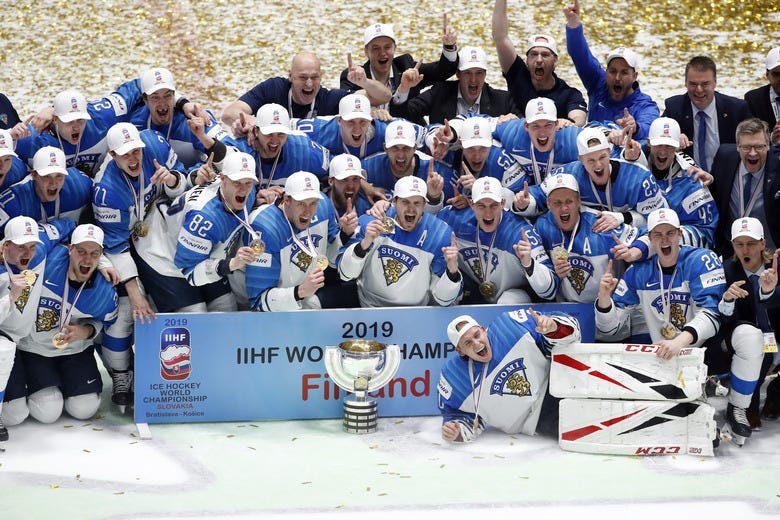 For the first time since 2011, Finland takes home the gold medal at the IIHF World Championship with a 3-1 win on Sunday over Team Canada in Bratislava, Slovakia.

The Canadians took the early lead just 10:02 into the first period as Shea Theodore (Vegas Golden Knights) fired home his second goal of the tournament. After the Finns failed to clear the defensive zone, Detroit Red Wings winger Anthony Mantha won a puck battle and gave the puck to Theodore streaking in. The Canadian defenseman then danced his way through a pair of defensemen, skated in towards the goal and fired a wrist shot over the glove hand of Chicago Blackhawks goaltending prospect Kevin Lankinen.

Canada would hold on to the lead heading into the second period, but an early Finnish power play flipped the script. After Theodore was called for a trip just 2:15 into the second, Finland went to work and got the game-tying goal courtesy of captain Marko Anttila. The former Blackhawks pick in 2004 took a pass from defenseman Sakari Manninen, and ended up firing a wrist shot through the legs of goalie Matt Murray (Pittsburgh Penguins) to tie the contest.

The score remained tied at 1-1 into the third period until Anttila scored his second goal of the game at the 2:35 mark of the period. This time, Anttila was able to find another hole through Murray as he took a pass from forward Veli-Matti Savinainen in behind the net and put a quick snap shot into the back of the net.

The Canadians were relentless in this one, especially in the third period as they out-shot the Finns 21-3, trying to desperately tie the hockey game.

However, Finland put the game on ice with 4:06 to go in regulation as former New Jersey Devils prospect Harri Pesonen chased down a loose puck, managed to find some room and fired a high wrist shot over Murray and in for the 3-1 lead.

This Finnish squad was mostly made up of players playing in various professional leagues over in Europe. The only two players on the roster that played in North America for the 2018-19 season were defenseman Henri Jokiharju (Chicago) and Juho Lammikko (Florida Panthers).

One of the top prospects for the 2019 NHL Draft, Kaapo Kakko, went pointless in the gold medal game for the Finns, but he finishes his first ever World Championship with six goals and an assist in 10 games played. He is likely going to be taken with the second overall pick in the draft by the New York Rangers, after the Devils likely take American center Jack Hughes with the first overall selection.

Finland has had an impeccable track record of success over the past few years in international competition. This win at the World Championship has now given the Finns the gold in the top-three tournaments that the IIHF runs, along with the Under-20 World Junior Championship and the Under-18 World Championship.

As for Canada, they come up short in the gold medal game for the second time in three years. Canada's last win at the World Championship came back in 2016 with a gold medal win over Finland in St. Petersburg, Russia.

Buffalo Sabres forward Sam Reinhart went pointless once again for the Canadians in the loss, giving him a final total of three goals and two assists in 10 games played.

Vegas forward Mark Stone was named as the tournament's Most Valuable Player as he scored eight goals and 14 points in Canada's 10 games. Stone was the hero for Canada on two occasions in the tournament, scoring the go-ahead goal for the Canadians with two-seconds remaining in a 6-5 win over Slovakia, and also scoring the game-winning goal in overtime over Switzerland in the quarterfinal round.

Russia ended up taking home the bronze medal in this year's tournament after a 3-2 shootout win over the Czech Republic earlier on Sunday. Los Angeles Kings forward Ilya Kovalchuk ended up scoring the game-winning goal for the Russians in the first round of the shootout, while Golden Knights prospect Nikita Gusev ended things with his goal in the third round of the shootout.

Jack Eichel and Team USA ended up finishing in seventh place in the tournament after a 4-3 loss to the Russians in the quarterfinal round. The U.S. will play in Group B of next year's tournament in Switzerland along with Russia, Finland, Germany, Latvia, Norway, Italy and Kazakhstan.

Group A in the 2020 World Championship will feature Canada, Sweden, the Czech Republic, Switzerland, Slovakia, Denmark, Great Britain and Belarus.