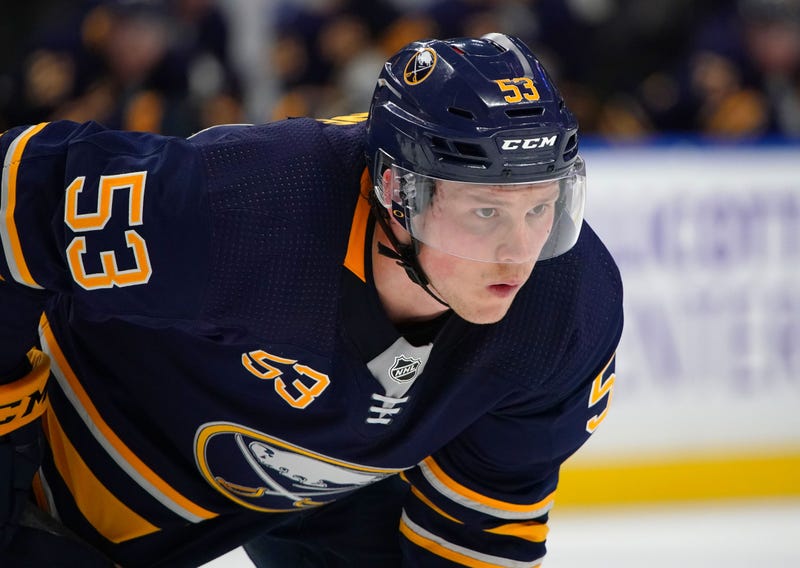 The NHL Trade Deadline is quickly approaching with many teams around the league looking to make deals to either boost their roster for a playoff push or sell off assets that do not fit in the long-term outlook.

With less than a week left before the deadline, there are some expectations that Buffalo Sabres general manager Jason Botterill makes a move to help his team that has, essentially, spiraled out of playoff contention after going 5-9-1 in their last 15 games.

While Jeff Skinner has been one of Buffalo's brightest spotlights in the 2018-19 season, he is set to become an unrestricted free agent this summer if he goes unsigned before July 1. However, Botterill and his representatives have been in discussions on getting a new contract done well in advance of the start of free agency.

Jeff Skinner is on pace to have the most productive year of his professional career. In 59 games with the Sabres, he is just one goal shy of his career-high 37-goal season in 2016-2017 with the Carolina Hurricanes. The timing could not be more perfect from the financial side as he gets set for a new contract after this season.

“Skinner’s ask on an extension is quite high based on the numbers he’s put up," said Sportsnet writer Luke Fox with Mike Schopp and the Bulldog on Wednesday. "I think trading him at this point would be disheartening to the fan base there who’s seen so many positive signs over the first few months of the season."

It has been said by many, including Skinner himself, that he has enjoyed his time in Buffalo and with the Sabres this season. That's promising when it comes to the hopes of getting a new contract signed before he hits the open market in the offseason.

Skinner has been one of the more consistent and successful players on the roster this season. He currently sits in third in the league for goals scored, just four goals behind Alex Ovechkin (42) and two behind Patrick Kane (38).

Fox believes that even though Skinner would be a valuable piece at the deadline on Monday, Botterill is looking to keep him in town. When the offseason comes, Fox thinks that Botterill can easily convince Skinner to extend with the Sabres.

"You can sell Skinner on: A.) this is a great hockey town that you’re in. I’m playing you with the best centerman that you’ve ever played with, who’s younger than you, and you guys are gonna flourish together,” said Fox assuming the role of Botterill pitching to Skinner. "We're going to add some more pieces in the summer, hopefully, when a guy like Pominville comes off the books and frees up a little bit more money to add to this team that is now heading in the right direction."

A contract extension for Skinner has been a topic of conversation since mid-November, and talks between Botterill and Skinner's representatives reportedly got started last month.

While the fans in Buffalo wait to hear any news on a possible contract extension, the rest of the NHL continues to wait on some other big names that are likely to be moved by Monday's deadline at 3 p.m. EST. One team that is holding things up on the trade market is the Ottawa Senators and what they are going to do with forwards Matt Duchene and Mark Stone.

“Everyone is waiting on Ottawa, in particular, with Matt Duchene and Mark Stone,” Fox said. “Two forwards who can instantly improve a contender.”

Ottawa is in position to win the draft lottery his year, bottoming out the league with 49 points so far this season. However, the Senators traded that first round pick in 2019 to the Avalanche last season in order to acquire Duchene from the Colorado Avalanche. After giving up that pick, Fox believes that Ottawa is looking to get a first round pick back in return in a Duchene trade.

“He’s the kind of guy who’s having a career year, and could drive a nice little bidding war over the next few days,” stated Fox.

Leading the pack of teams interested in Duchene would be the Nashville Predators, according to Fox. Other teams in the hunt for him would be the Columbus Blue Jackets, the Boston Bruins and the Winnipeg Jets. Based on the likelihood that Duchene will be moved at the deadline, he has potentially played his last game as a Senator, even though Ottawa has three more games before Monday.

“Ottawa and Pierre Dorion hold the key to when the dominos start to fall,” said Fox.

Once Duchene, and possibly Stone have been dealt, the focus will turn to two names that have been widely talked about all season as possibly being moved by Columbus: centerman Artemi Panarin and goalie Sergei Bobrovsky.

With the Blue Jackets sitting in the second Wild Card spot in the Eastern Conference, trading away their starting goaltender does not seem like the best idea, according to Fox. Panarin is likely to be the big piece coming out of Columbus.

“He’s their leading scorer," Fox said. "This is a team that is likely going to make the playoffs, so if you give him away, you have to find something else, which is why I guess they’re poking around with Duchene."

Once those four big names come off the trading block, this will open the door for some second-tier guys that are likely to be moved as teams dash to add depth to their roster. Fox pointed out names like Wayne Simmonds from the Philadelphia Flyers and Michael Ferland from the Carolina Hurricanes.

“Just their brand of play. They can provide secondary scoring to a team," said Fox. “They can help out with the power play, and they’re both the kind of guys that you want come playoff time. Do all the greasy things that seem to be of higher value once April hits.”

We'll have complete coverage of the NHL Trade Deadline on WGR from 6 a.m. to 7 p.m. on Monday.

Coverage on the NHL Trade Deadline on WGR is presented by The Ideal You Weight Loss Center.