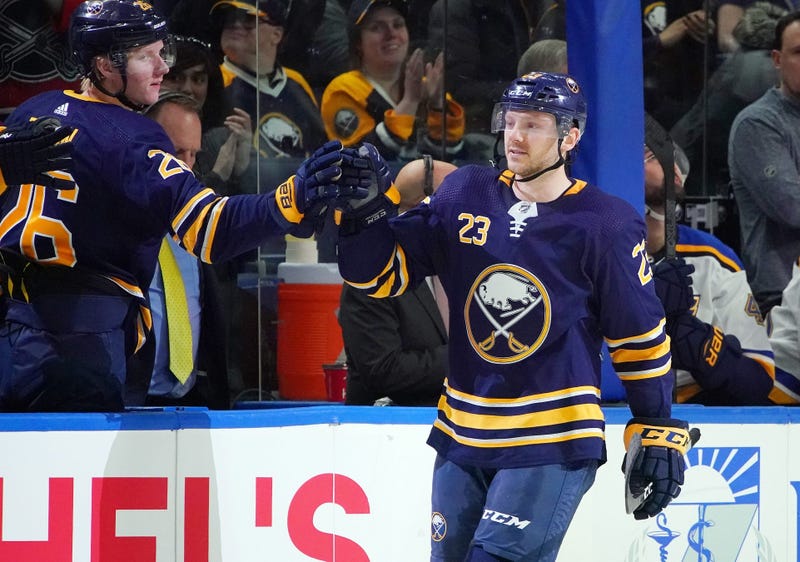 The Buffalo Sabres' seven-game losing streak finally came to an end on Sunday, as they beat the St. Louis Blues 4-3 in a shootout at KeyBank Center.

Johan Larsson, Evan Rodrigues and Conor Sheary scored in regulation for the Sabres, while Jack Eichel and Sam Reinhart netted goals in the shootout to nail down the victory. Carter Hutton finished the evening with 30 saves on 33 shots faced, and turned aside two of the three shots he faced in the shootout.

Let's head inside the locker room to see what Sheary, Rodrigues, Carter Hutton, Nylander and Phil Housley said after the win:

Conor Sheary:
Felt good from the get-go: "Just one of those games; sometimes you have your legs, sometimes you don't. Today I did and I was able to make the most of some opportunities."
On Alex Nylander's growing confidence: "Tonight we were able to capitalize, for sure. It's a confidence thing. These last couple days he's really been showing more of it as the games roll along."
Evan Rodrigues:
Breaking his goal drought: "It's funny how this game works. Grade-A looks don't go in, but sometimes you just put a puck on net and it goes in. Our line has been playing well as a whole these last couple of games."
Helping out Nylander on the fly: "We're trying to talk to him a lot and make the game easier for him. When you let him know that he has time or needs to make a quick play, it only helps his development."
Carter Hutton:
Great atmosphere: "I thought we brought a great effort tonight, and the fans were into it as well. I think everyone enjoyed the effort today."
Playbook on David Perron in shootout: "I've seen him score a lot of goals, especially on the backhand. I had an idea of what he was going to do before he did it."
Sweeter beating the Blues?: "I try to treat every game the same; wins are wins. It's rewarding beating a former team, though. You relish the moments playing against friends over there."
Alex Nylander:
Growth as the games come: "It's my fourth game in here and every game I feel like I've been getting better. It was nice to get those goals today, and the team was really good through the 60 minutes and more."
Confidence growing daily: "I'm starting to feel more confident. It's feeling good. Wanna keep playing my game along the way."
Phil Housley:
On the effort: "It got physical late there.  It was a strong battle and compete level through the 65 minutes from start to finish. Overall, I liked the way we played on the tail end of this back-to-back."
Nylander's growth is promising: "He's gotten his step now. He just seems to gain more confidence as the games go on here. It's good to see him contributing."