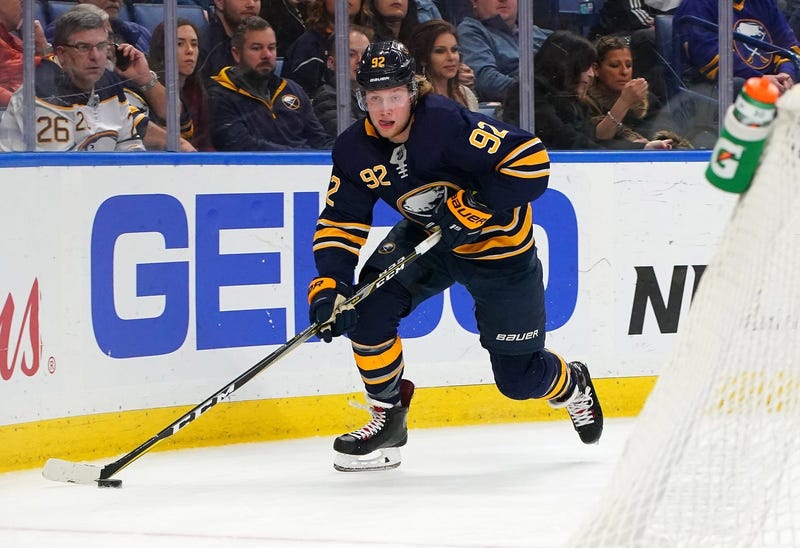 The Buffalo Sabres were blanked for the second straight game on Tuesday, falling to the Dallas Stars 2-0 at KeyBank Center.

Ben Bishop stopped 35 shots for his third straight shutout, extending Buffalo's scoreless streak to 137:40. The Sabres have now dropped five straight games with another home contest on tap against the Pittsburgh Penguins on Thursday.

Let's head inside the locker room to see what Jeff Skinner, Alex Nylander, Tage Thompson and Phil Housley had to say after the loss:

Jeff Skinner:
On his scoring slump: "It's not a good feeling, but at the same time you gotta stick with it and create some more. Couple of nice plays on those chances. Just gotta stick with it and they'll start going in."
On the team's chances: "You have zero goals you can always do more, but I think we had some good looks. Again, [the Stars] don't give up much so when you get looks against a team like that you gotta bear down and get one."
Alex Nylander:
On how he felt: "Think it got better and better. It was a little different coming in this year than the past couple years, but I think I got more and more comfortable out there."
On missed opportunities: "We had a lot of scoring chances throughout the whole team. We easily could have had two goals, but we just gotta keep going and focus on the next game here."
Tage Thompson:
On it not being Buffalo's night: "Throughout the whole game we had our fair share of opportunities to score. Just one of those nights where the puck's not bouncing your way. It came down to special teams and Dallas won."
On the effort: "I thought our effort was there, I thought our compete was there. As long as we're getting those chances, I think we're doing things right."
AUDIO: https://wgr550.radio.com/media/audio-channel/3-12-tage-thompson-post-game
Phil Housley:
On the effort: You can't fault the way we worked, the effort. We were heavy in the battle. It's unfortunate because this is the result. It's disappointing. But at the same time, we had our opportunities."
On the response after the Colorado loss: "Again, I can't fault the way our guys worked hard. It wasn't the result...I know it sounds like a broken record, but after coming back from Colorado I did like the response from our players."