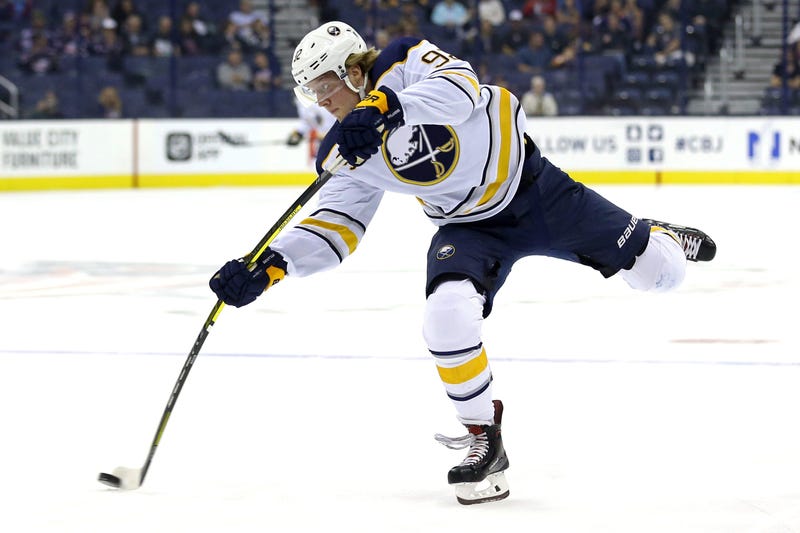 The Buffalo Sabres broke their seven-game losing streak on Sunday with a 4-3 shootout win over the St. Louis Blues in front of an energized crowd at KeyBank Center.

While not mathematically eliminated just yet, Buffalo is far from playoff contention, sitting 13 points back of the final Wild Card spot in the Eastern Conference with 10 games remaining. With the Sabres likely missing the playoffs for the eighth consecutive season, the team is starting to give an extended look at some of their young players in the organization like 2016 first round pick Alex Nylander. The 21-year-old registered his first career multi-point game in the NHL on Sunday with two assists, and was playing on a line with Evan Rodrigues and Conor Sheary. Over the past three seasons, Nylander has scored one goal and registered four points in 11 career games with the Sabres.

Sabres head coach Phil Housley joined Howard Simon and Jeremy White on Tuesday morning to talk more on Nylander, as well as the recent struggles of goaltender Linus Ullmark, the possibility of other young players getting the call up from Rochester and more.

Here is some of what Housley had to say:

Housley on the progress of Alex Nylander:

"Right now, he's earned some ice time and he's been put on our second line with Rodrigues and Sheary. We're going to still give him an opportunity here. We really want to put him in a position to succeed and those decisions will be made as we move throughout the season here. It's going to be interesting how he responds to now having two to three pretty good games, how he continues to develop. That's what I'm looking for, to continue to show what he can bring to our team."

"I think he's stronger on the puck, he's getting in on the forecheck, making contact, he's getting his body over the puck and he can create in small spaces. He's just getting more comfortable being in those situations where he's a lot stronger now. He's using his feet now to attack the game, he's got tremendous speed when he really digs in and confidence exudes all of that talent coming out of him. In the tight games, we're going to need him to, obviously, create some offense for us. I just feel that he's using his speed a lot more right now."

Housley on possible plans for more call-ups from Rochester:

"[General manager Jason Botterill and I] continue to talk and have conversations about our players in Rochester. We'll make decisions on a day-to-day basis. Those conversations have been had, what type of player, what players we'd bring up, that's yet to be seen, but we're going to continue that conversation."

"It just all depends on where our team is at with injuries and opportunity. We're going to try to make some decisions here to get some guys some opportunity, depending on the way our team is playing. They're having a great season and we don't want to try to disrupt their chemistry and their team, but we need to get some players up here at the right time to give them an opportunity, give them some games."

Housley on the recent struggles of Linus Ullmark:

"Linus has done a really good job this year giving us an opportunity to win and I know he's played some really good hockey for us. I just think his last outing (against the Carolina Hurricanes) leaves a bad taste in your mouth because of the way the goals went in. For the most part, he's provided us with some good goaltending. A lot of it has to do with we haven't given him a lot of goal support and out margin of error is so slim that every play, every mistake is so important. For the most part, he's been covering up a lot of our mistakes. He's got to fight through it, that's part of his development, he's got to be mentally tough and he's going to get another opportunity coming up here."