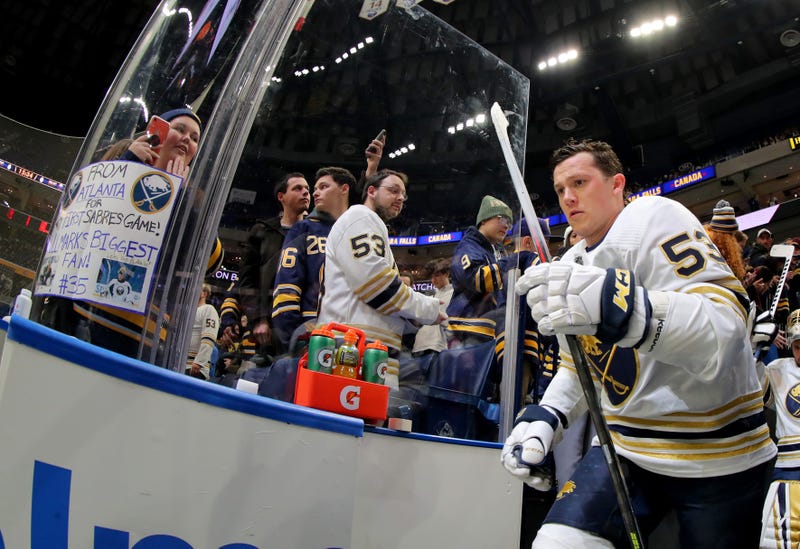 The Buffalo Sabres had a bounce back win on Tuesday night over the Detroit Red Wings, rebounding twice from an early goal given up to start a period and then finally coming out of the game with a 3-2 win.

This wins comes after a 3-2 loss to the Anaheim Ducks on Sunday, where the team found themselves in a deep 3-0 hole through the first 12 minutes of action that they could never dig out of.

In Tuesday night's win, Sabres captain Jack Eichel reached the 70-point mark for the second straight season, becoming the first player since Derek Roy to achieve 70 points in consecutive seasons. Sabres forward Conor Sheary ended a 13-game goalless drought in the first period with a goal to tie the game at 1-1, then Marcus Johansson ended a 14-game goalless drought with a goal in the second.

Meanwhile, goaltender, Carter Hutton earned this third win in his last four starts in goal for Buffalo, making 27 saves on 29 shots faced. This stretch comes after Hutton faced a tough stretch of games where he lost 12 consecutive starts in goal.

However, one player who continues to struggle is forward Jeff Skinner, who’s goal drought has now reached a career-high 19 games. He has not scored a goal since Dec. 2, and has only registered two points in that stretch of games.

Skinner was skating Tuesday night on a line with Evan Rodrigues and Michael Frolik, and ended up playing just 13:11 of ice-time and registered two shots on goal.

The 27-year-old has not had much of a chance this season to skate on a line with Eichel and Sam Reinhart, who he skated with for a majority of the 2018-19 season under head coach Phil Housley. With Eichel and Reinhart, Skinner was able to generate a majority of his 40 goals last year, which helped him earn a nice new contract with the Sabres this past offseason.There has been much debate as to whether or not Skinner should be put back with Eichel and Reinhart while Victor Olofsson recovers from a lower-body injury. However, Sabres head coach Ralph Krueger does not believe in making his roster decisions based on individual needs for certain players.

"We wake up every morning here growing the team, and we wake up every morning here doing what's best for the team," Krueger said on the Howard and Jeremy Show during his weekly Wednesday visit on WGR. "We base our decisions on the mixes, the chemistry and the lineup that we think is the strongest for the Buffalo Sabres. That’s the way we work and that’s the way we're going to continue to work. When Jack is playing up against the top lines and top [defensive] pairs of the other teams, we need other lines to be able to produce against the second and third pairs of the opposition.

"Everything is about the team game, and that's the way the Buffalo Sabres are going to be built moving forward and that's the way we're going to become competitive in the National Hockey League. We're going to hold that line. We believe in it, we feel confident in it. The guys are embracing it, and what we have to learn is to finish games better. What we have to learn as a group to manage our specialty teams better, and we're excited about what's going on here behind closed doors. We understand people aren't happy with the results and they'd like to see us with six, seven, eight points more in the standings, but again it's all about the team here and we will continue to work in that way.”

Skinner has been working hard trying to find a way to help generate offense while serving in more of a depth role, but Krueger believes that when he finally does find the back of the net, he can start to really make a bigger impact on the game.

"He's getting opportunity, and he's trying," Krueger said. "He's working on it, and when he gets one; he's a bunch scorer. He'll get a bunch."

Krueger also maintains that the Sabres want to be more than a one line team, and keeping Skinner and Eichel apart seems to be a part of that plan for the long-term.

Reinhart is on pace for a career-year with the Sabres, on track to score 30 goals for the first time in his career while registering a career-high 67 points. He is, arguably, Buffalo's second-best playmaker on the team, and for most of the year has been linemates with Eichel.

There has been thought that to spread some offense around the lineup, it may be an option to put Reinhart on his own line from the wing and drive play from there. However, Krueger went again with his team first approach to constructing the lineup.

“Why would you break up that pair right now? They're as good of a duo as there is the National Hockey League," Krueger said. "The way they synergize also defensively, we just don’t see that as an option at the moment.

"Sam Reinhart is a very complete athlete and player. He's a leader in our group, and you've got to love the season that he's having. He's working for everything, and the way he compliments Jack is outstanding. It's very important that you have an extremely strong two-way player who is able to free Jack and Sam from defensive responsibilities. Jimmy Vesey has done an excellent job of that in the last few games. That's the way Jack, for us, needs to be complimented, and Sam has just done a fabulous job... Right now, he's doing everything we ask, and there would be no reason to move him.”

“We are truly trying to work in a small picture here," Krueger said. "We do what we feel is right for the game, and yesterday was a good four-line game going, but against Anaheim we did not have a four-line game going. We needed to reduce our roster really quick, and Jack was playing either side of timeouts. We're going to always do on the day what we think is going to give us the best chance to win. There's not a day where we're not going to go after the [win], and this group has no quit in it. We appreciate the way the guys are always fighting back. We have fallen behind too much as of late, and we need to work on getting some leads here in the next games.

"Jack's minutes aren't planned before the game. He dictates that often, and the game dictates that. That's what makes it fun. It's the greatest game to be coaching. I just love coaching the game of hockey, where you are really truly submersed in the moment where you submerse with the feeling of who's on today and who's off. Do I always get it right? No way. I'm going to make mistakes. I always have, and I always will, but they're there because you try and you risk and you try to do things. Jack's just been fantastic in the process. Whether he plays 20 minutes or he plays 28, he's going to give his best every single shift. He's as hard working as anybody on the team. What a leader he is moving forward."

In terms of injuries, Krueger said that both Victor Olofsson and Kyle Okposo will return to a full practice for them on Wednesday afternoon and that they are now day-to-day, in terms of their return. However, goaltender Linus Ullmark is still a few weeks away from returning, according to the Sabres head coach.