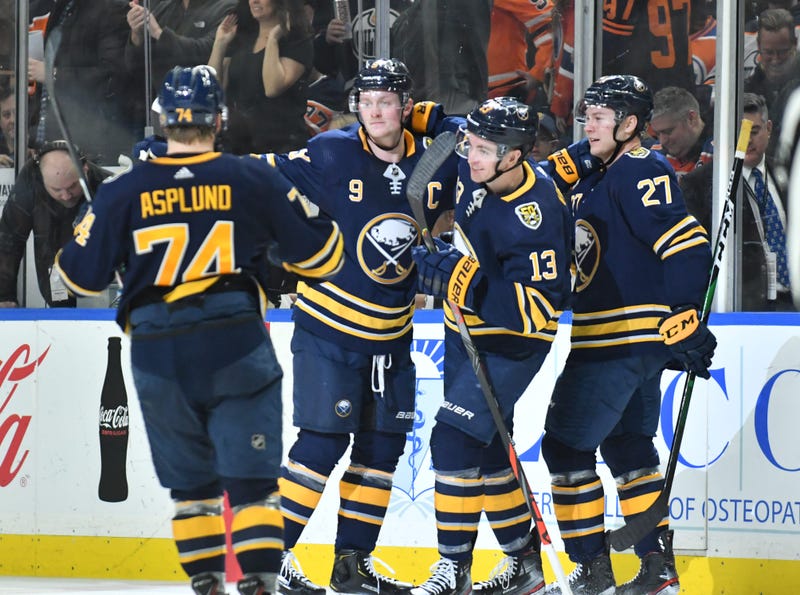 We are past the halfway point of the 2019-20 season and the Buffalo Sabres currently find themselves on the outside looking in on a playoff spot in the Eastern Conference standings.

Buffalo currently has a 19-17-7 record through 43 games this season with 45 points, which puts the Sabres in fifth place in the Atlantic Division. The Sabres currently sit eight points out of a top-three spot in the division, behind the Toronto Maple Leafs, who have 53 points. In the Wild Card picture, the Sabres are five points back of the final spot that's currently being occupied by the Philadelphia Flyers.

Where the Sabres have succeeded a majority of the season is while playing at KeyBank Center, where the team is 13-4-3 in 20 games in front of the home crowd. One of the home games counting on their schedule was played in Stockholm, Sweden as part of the NHL Global Series in November.

However, Buffalo has struggled away from home this season with a 6-11-4 record, which is one of the worst road records in the NHL to date.

The Sabres will have a tough test on Thursday night as the team will head out on the road to take on the defending Stanley Cup champion St. Louis Blues at the Enterprise Center in St. Louis, Missouri. The Blues find themselves as the top team in the Western Conference with a 27-10-7 record and 61 points.

The good news for the Sabres is that they already have one win this season over the Blues back on Dec. 10 when Buffalo skated out to a 5-2 win at KeyBank Center. Buffalo get two goals from captain Jack Eichel, while also getting contribution from Sam Reinhart, Johan Larsson and Zemgus Girgensons.

After the Blues, Buffalo's schedule strength of opponent will lighten up a bit with a home matchup against the Vancouver Canucks (23-16-4) on Saturday, followed by a road meeting with the Detroit Red Wings (11-30-3) on Sunday.

If the Sabres are to seriously get in contention for a playoff spot come March or April, a few wins this week will help Buffalo's cause greatly.

Not to mention, the team has fought its way to two wins to kick off the 2020 calendar year over the Edmonton Oilers last Thursday and the Florida Panthers this past Saturday afternoon.

Buffalo Sabres head coach Ralph Krueger joined Howard Simon and Jeremy White on Wednesday morning for his weekly appearance on WGR. Krueger took the time to talk about the call up of defenseman Lawrence Pilut, the expectations of newly acquired forward Michael Frolik, and more.

Krueger on the call up of defenseman Lawrence Pilut:

"Lawrence Pilut is an interesting player for us. We haven’t made that call [of playing him in St. Louis] yet. We’re happy to have him back here in our midst. Coming off an injury from last season, he wasn’t able to be a part of our training camp. It was excellent that he spent the time with us in Sweden, so we got to know him well there even though he didn’t get to play. He was really a good kid to have around, and for us to feel his strength and his future; now we have him here again off the injury to McCabe. It’s just a look to see, but we’ll make that call tomorrow."

Krueger on Pilut’s play in Rochester this season:

"We are permanently in contact on multiple levels with Rochester. The reports on him are outstanding. That he’s really taking it to another level since returning from the injury and that he’s getting really comfortable in his game and he’s fully back up to speed… Sweden left its mark. He’s an outstanding character, and just brings a good spirit into the day-to-day. Above all, he’s a good hockey player and we look to that next level of Lawrence Pilut."

Krueger on the arrival of Micheal Frolik to Buffalo:

"There’s the off-ice component that we’re always interested in, and that’s the person that he is, the experience that he bring with him for the phase of evolution that we’re in right now. He’s going to be a good voice in and around the room, but he is a very experienced two-way player. He’s been known for his penalty killing. He’s experienced a Stanley Cup, which means you’re not only a penalty killer but you’re also able to make a play, which he’s very clearly able to do. He can play up and down the lineup depending on the need of the group. We’re just going to take it a day at a time and let him show us what he’s capable of."

Krueger on finding offense after the loss of Victor Olofsson and Jeff Skinner:

"[The injured players] are handed over to the medical department. We have an amazing staff here, and our rehab and medical care is strong so these players are well taken care of. We concentrate on the players that are healthy, the ones that are able to go. We will always get up in the morning here and put the best possible roster together, and there's clearly a different mix now. It alters the way we execute on the power play, it alters the way the lines are worked together, but it's part of the long season in the National Hockey League. Every team has to deal with that. You need to score a little more by committee, we need more depth scoring with Olofsson and Skinner out. Those are some big numbers that disappear, but others need to step up and we've challenged them to do that."

Krueger on coming off a short break before Thursday's game in St. Louis:

"We had such an intense period after Sweden with the 21 games in 39 days. After the Christmas break, I thought we came out and played well against Boston and Tampa Bay, but but we just didn't get the points, so everybody was disappointed with that. I'm pleased with the way the group has stepped up here against Edmonton and Florida to get the wins, and I believe that momentum is going to go with us to St. Louis... I think we needed these few days. We need to get a good start tomorrow, get right back in where we left off against Florida and into the habits that make us strong. I'm optimistic that we will have a lot of energy for the game in St. Louis tomorrow."