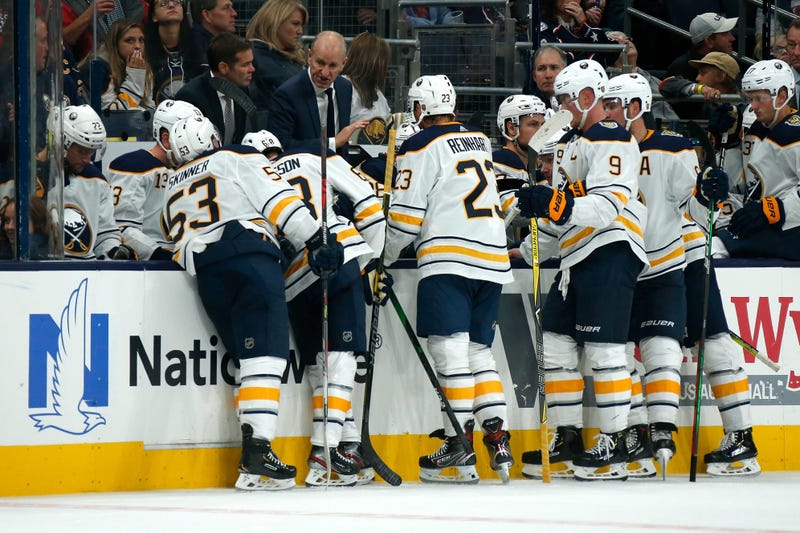 In a year that's been full of negatives, the 3-1 loss to the Winnipeg Jets on Tuesday night marked another low point for the Buffalo Sabres this season.

The contest in Winnipeg was the last of a four-game Western Conference road trip for the Sabres, an excursion in which they finished 0-4, earning zero points. The current skid matches Buffalo's second-longest losing streak of the season, it's also the third time in 2019-20 that the Sabres have dropped at least four games in a row.

With the team currently sitting 12 points out of a playoff spot with just 16 games remaining in the regular season, a trip to the postseason is no longer a reality. Things also probably won't get much better for the Sabres, at least in the near future. Thursday night's home game against the Pittsburgh Penguins will be the start of a tough stretch of games for Buffalo. After the Penguins, the Sabres will travel to Philadelphia to take on the Flyers, arguably the hottest team in the National Hockey League, on Saturday, March 7. After that, the Sabres will be back home to face the Washington Capitals, the current leaders of the Metropolitan Division, on Monday, March 9, followed by back-to-back divisional games at Montreal (Thursday, March 12) and vs. Boston (Friday, March 13).

Despite all this, Sabres head coach Ralph Krueger still seemed to have a positive outlook when he spoke with Howard and Jeremy for his weekly Thursday morning appearance on WGR. The team's bench boss discussed topics that included the Sabres' struggles on the penalty kill, Jack Eichel playing through an injury, when Linus Ullmark will return to game action and more.

Here is some of what Krueger had to say:

Krueger on Thursday night’s game against Pittsburgh and bouncing back from the recent 0-4 road trip:

“It’s a good [game] for us to throw our energy in to. We’re not in a happy place right now. But we are in a place where we’re continuing to try to confirm our game. It’s a challenge where we need to make the picture really small here, concentrate on the game, and have a good performance here for our home crowd.”

Krueger on Jack Eichel playing through an injury:

“It’s certainly not an injury that has any risk of putting [Eichel] in the lineup, or we’d be dealing with it differently. We have multiple players with aches and pains at this time of year, that’s the way hockey is. It’s not an injury we find is jeopardizing his game that much, but it’s there, and he’s showing captain leadership by fighting through it. Our medical team is working hard with him. We hope in the next few days it continues to get better, which it is actually doing, even though he’s playing. But, again, he’s not the only one. I have to say there are some ice bags in the room, but that’s the nature of the game. We need to learn to fight through that as a group, and we are right now.... We wouldn’t be having him taking face-offs if it was a risk. Again, it’s always the question you ask, ‘can [the injury] get a lot worse if they player plays?’ and we avoid those situations wherever possible, and that isn’t the case. So, right now we have a healthy lineup, and we need to show that power in the game today against Pittsburgh.”

“What’s been strange is that at home we’ve been mid-table in our penalty killing, and it’s on the road where we’re at the very bottom. It’s a strange phenomenon. I’ve never seen it quite like that. Generally our team and our structure and the way we perform the principals, we apply the same at home as on the road. And our power plays run pretty well equally on the road and at home. So, it’s a strange one. All you can do in those situations is work hard on the fundamentals. That’s the only thing we know how to do as a coaching staff, and we’ll continue to drive those in. We have made some personnel changes. You would have seen that [Kyle] Okposo was doing some penalty killing on the road here the last few games. We really liked what we saw from him. His game’s been such a team game right through the season here, and his work without the puck has been strong. So, using different personnel is something we’re doing also on defense. You’ve been seeing Rasmus Dahlin get some penalty kill minutes…. It is something. There are all kinds of different approaches that there’s no clean and easy fix in this league. It is so competitive and it is so strong, and especially the power play [units] of every team have a lot of skill in them. We just need to continue to work hard on the areas we’re not happy with, and [penalty killing] is certainly one. Keep the penalty kill the way it’s going at home. It’s been really strong at home lately, and it needs to be strong tonight to give us a chance.”

Krueger on what he’s seen from recently-acquired forwards Wayne Simmonds and Dominik Kahun:

“Both of them bring personalities that are unique. Wayne Simmonds has a reputation of being a tough player who brings automatic respect, because he is a very good teammate and an excellent human being. He’s brought another strong voice into our room. He’s a player who really is there for his teammates all of the time, pushing guys in the right direction, but also [he comes in] with an experience that people will listen to him. And the game he brings, he looks for the net-front. He looks for the blue paint. He looks for the confrontation that is needed there, and it’s a great example for us. Dominik Kahun is a player that I know from his European past. At 23, he’s already won multiple championships over there [in Europe}. He’s been to World Championships, won a silver medal at the Olympics, and now he’s learning how to play the NHL game. He’s in his second season. He’s definitely got the skill. He’s got the smarts. He was a centerman his whole life before, so he understands the game without the puck. He’s been a spark plug kind of player for us here. We look forward to seeing him grow into our group. The important thing is that when you add a player he brings something fresh, something different, something new, another tool that is exciting. Both of them do that, so it’s been a good move for the organization and we look forward to seeing them grow here.”

“He’s back in the group, looking at NHL shots here. We’re hoping to bring him in as a backup within the next couple of games. It’s a process you need to just take one day at a time. He’s only been with us a couple of days now, and it’s just good to have him back. As always, our rehab team sends players back to us in game-ready shape. We’re hoping to have him back in the lineup here in the next few games. He’ll be a good addition back into our group.”

You can listen to the full interview with Krueger here: