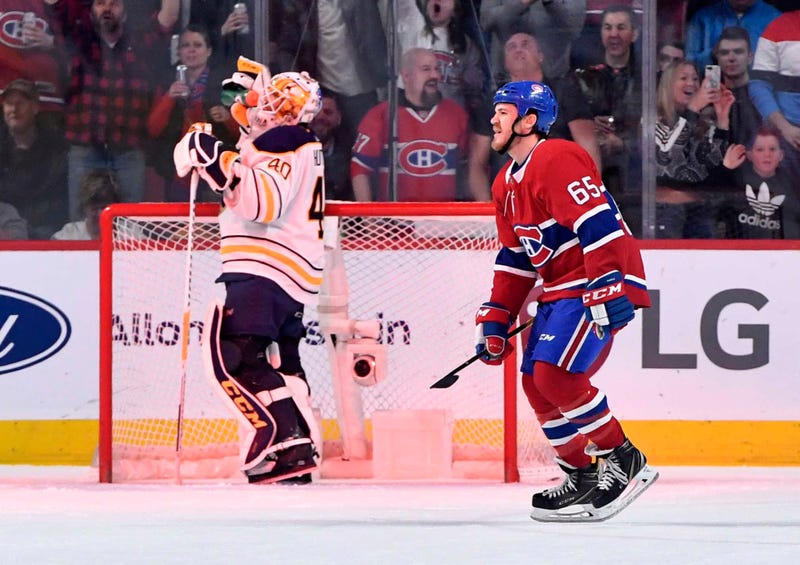 The Buffalo Sabres were officially eliminated from playoff contention on Saturday, following a 7-4 defeat to the Montreal Canadiens at the Bell Centre in Montreal.

Brendan Gallagher, Max Domi and Tomas Tatar all contributed to Montreal's offensive output with three-point nights. For Buffalo, Jack Eichel recorded his 26th goal of the season, which is a new career-high. Alex Nylander added a goal, giving him four points in three games, while Sam Reinhart snapped an 11-game scoreless drought with his 19th of the season.

Let's go inside the locker room to see what Eichel, Reinhart, Nylander and head coach Phil Housley had to say after the loss:

Jack Eichel:
On missed defensive assignments: "Maybe we gave them a lot of what they got. I gotta get tighter on my check on that Gallagher goal. I feel like I kind of lost sight of the puck there. I thought [Shea] Weber might be taking the net, but he makes a good play. I gotta be better. I gotta be tighter on Gallagher and not let him get that shot away. That one's on me, but I think just as a group we can do a better job of playing for each other, making the next play."
On playing for something over these last few games: "It's been a long process here. It's been a long year and obviously these same issues continue to haunt us. We gotta be better here for the next few games. I think there's a lot of pride on the line, there's a lot to play for. We represent our city, we represent each other, this organization. That should be enough right there. We gotta play for each other more. That's kind of all I got."
AUDIO: https://wgr550.radio.com/media/audio-channel/03-23-jack-eichel-post-game
Sam Reinhart:
On missing the playoffs: "It's not an easy situation to be in. When you go through a couple years of it, and they start adding up, it just adds to the frustration. When we do have a little bit of success at the start of the year, it makes it that much more difficult to lose, really. So we gotta find a way to stick together and start playing for one another down the stretch here, and hopefully get a couple wins and get a better feeling."
On pushing too much offensively: "I think when things aren't going well, offensively maybe we're trying to do too much of that and focus too much on that. When in reality, we're all better off focusing on the defensive end and those opportunities will come for us."
AUDIO: https://wgr550.radio.com/media/audio-channel/03-23-samson-reinhart-post-game
Alex Nylander:
On increasing confidence: "It's getting better and better throughout these games I've played. Fortunate to play with really good linemates as well. I'm just trying to keep working hard and play my game, play simple, getting pucks to the net."
On defensive lapses: "We made a couple of mistakes and they capitalized on them. We just gotta clean up that stuff in the next game coming up here. Obviously playing a little bit more simple in the [defensive] zone, getting the first pass and touching pucks first in the [defensive] zone."
AUDIO: https://wgr550.radio.com/media/audio-channel/03-23-alex-nylander-post-game
Phil Housley:
On too many mistakes: "We should have won the game. We played a good enough hockey game to win a hockey game tonight. Just mistakes...critical mistakes too. We have a good first period, we get the first goal lead, they had a push. In the second period, we're trying to do too much ourselves. Too much one-on-one hockey."
On being eliminated from playoff contention: "It's tough. We didn't want to be in this position. We got a young team even with Jack and Reinhart and [Ristolainen] -- these guys are still young. We'll make that evaluation tomorrow and will look at the game, but there's a lot to play for and a lot to prove right now."
AUDIO: https://wgr550.radio.com/media/audio-channel/03-23-phil-housley-post-game