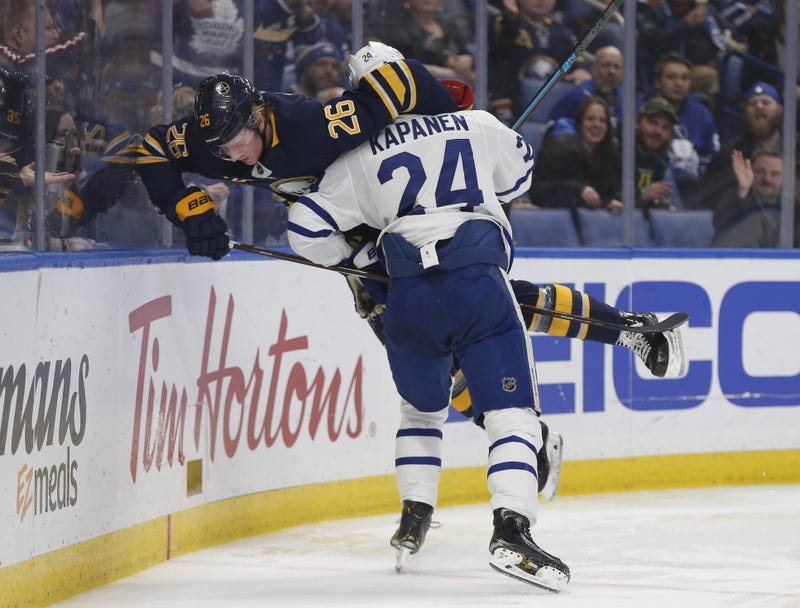 The Buffalo Sabres suffered another loss to the Toronto Maple Leafs on Wednesday, dropping their fourth and final game of the 2018-19 season against the Leafs by a 4-2 score at KeyBank Center.

Carter Hutton made 42 saves in the loss, but was, arguably, the only reason the Sabres were able to stay within striking distance throughout the night. Buffalo got goals from a pair of their youngsters as Casey Mittsletadt scored on the power play in the third period, followed by Alex Nylander's third period goal to cut the deficit to 3-2.

Let's go inside the locker room to see what Mittelstadt, Nylander, Hutton and head coach Phil Housley had to say after the loss:

Casey Mittelstadt
On Carter Hutton keeping the Sabres in the game: "I think we gotta to be better as a unit, obviously, he bailed us out...countless amount of times and even the goals they scored, some of them [were] lucky bounces, things like that, nothing he can do, so, I mean, he played a great game and obviously, we gotta be better for him for sure."
On why Toronto dominated the first two periods: "I think we just weren't executing, I think there was plays there and plays we had to make and I think we were just too slow, and didn't execute quick enough and obviously they've got a fast team and they're gonna come at you fast so you gotta move the puck quick, be ready to move, and that's kind of how you beat it."
AUDIO: https://wgr550.radio.com/media/audio-channel/03-20-casey-mittelstadt-post-game
Alex Nylander
On the team's slow start: "We weren't keeping it simple, we weren't sticking to our game plan. They were coming hard at us from the start, we weren't ready from the start, we just gotta...start playing simple and get pucks to the offensive zone."
On how scoring in the game can help build confidence: "It obviously helps to get the first one outta there, and I'm just trying to play my game, every game here, and working hard and just enjoying all the time I get here."
AUDIO: https://wgr550.radio.com/media/audio-channel/03-20-alex-nylander-post-game
Carter Hutton
On Toronto's three goals while he was in net: "They generate those kind of chances, I don't really think it's luck, you know what I mean, that's just [if] you let a team get that many chances they're gonna put pucks in the back of your net."
On the team trying to tie the score in the third period: "I thought we played well in the third there, but again, you know, it's too good of a hockey team to just to play one period, so it's obviously frustrating here on home ice here, you know, we get a big win and then, you know, just we can't answer the bell here today."
AUDIO: https://wgr550.radio.com/media/audio-channel/03-20-carter-hutton-post-game
Phil Housley
On the overall team effort in the loss: "Carter Hutton bailed us out in the first and second period. You know, we knew the magnitude of this game, the rivalry, and we didn't execute early. You know, we couldn't make a wall play, we didn't move our feet when we had the puck, we turned the puck over and then it came right back after us and we were chasing, chasing a lot. You know, couldn't kill the cycle, then when we did have the puck we didn't manage it very well and they have a very good rush team, transition team, and their better players were really good tonight."
On why the team played better in the third period: "We made a decision, we came back, supported the puck off the breakout, we managed the puck in the zone, we got it behind them and then established the fore check. That was the game plan coming in, and when you don't it for two periods...it could have been a lot worse if it wasn't for Carter [Hutton]."
AUDIO: https://wgr550.radio.com/media/audio-channel/03-20-phil-housley-post-game