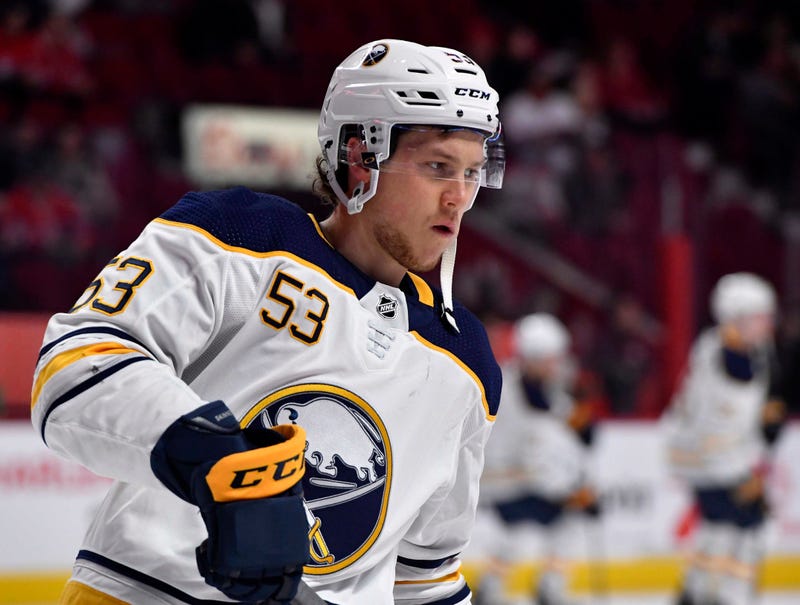 The Buffalo Sabres ended their tumultuous season on a high note with a 7-1 thrashing of the Detroit Red Wings on Saturday night at Little Caesars Arena in Detroit, Michigan.

In addition to the blowout win, Sabres forward Jeff Skinner became the team's first 40-goal scorer in a season since Thomas Vanek reached the milestone 10 years ago in 2009. Skinner (two goals), Rasmus Dahlin (one goal, one assist), Jack Eichel (two assists) and Rasmus Ristolainen (two assists) each finished the night with a two-point effort to lead the Sabres to a victory.

Jeff Skinner:
On scoring 40 goals in a season for the first time in his career:  "It's a nice, round number, I guess. You're not going to score that many goals without some pretty good plays from your linemates. So, to me, I think you kind of share it with the guys you're out there with and we're all creating those goals."

"[Evan Rodrigues] and [Kyle Okposo] were telling me before the game that they weren't going to shoot anything and they were looking for me out there, I saw them. Even some of the plays that didn't go our way, I think they were maybe sort of forcing it to me. And then, obviously the shift there where I got it with [Eichel] and [Reinhart], they were looking for me quite a bit on that shift. I think it's nice to be able to share with guys like that. I think guys feel like they're a big part of it, because they are. And, yeah, it was cool to get that one."

On playing with Eichel and Reinhart for a large part of the year helping with hitting 40 goals: "It's something they're a huge part of. I played most of the year with those two guys and their sort of talent and vision is probably a big part of a lot of those goals. Again, it's something that is sort of shared, I think. Obviously, it's goals and they're my stats but I think you're not going to get those without good teammates and good linemates. In that sense, guys get to share it a little bit."
AUDIO: https://wgr550.radio.com/media/audio-channel/04-06-jeff-skinner-post-game
Rasmus Dahlin:
On being the primary assist for Skinner's 40th goal: "He hit his 39th in the period before, I think. So, everyone was wanting to pass him the puck so he could score that goal. Luckily, it was me and congrats to him. It's a great season and he'll probably have a pretty heavy contract next year."
On the team playing better in the final week of the season: "I had so much fun these three games, we talked to each other about just having fun and do something good out of it. We had a bad period before but everyone dug in and had a smile on their face over these three last games."
AUDIO: https://wgr550.radio.com/media/audio-channel/04-06-rasmus-dahlin-post-game
Sam Reinhart:
On Skinner's 40th goal: "It was unfortunate to not be playing for much else coming down the stretch, but there's little things and little accomplishments like that to look forward to and we all knew where he was at, we talked about it and we were excited for him."
On the team pushing to play better in the final three games: "All we can do in that position was finish strong. Obviously, it wasn't a position we wanted to be in, to be able to turn it around and finish the way we wanted to feels better than the other way. It's all we could have done."
AUDIO: https://wgr550.radio.com/media/audio-channel/04-06-samson-reinhart-post-game
Phil Housley:
On the team's effort in the final week of the season: "It's a good way to end it. I mean, it's not where we want to be, unfortunately, as a group. But, I've got to hand it to the guys, because they finished it off the right way. It could've easily turned another direction but they fought against Nashville, we have the big win against Ottawa and right up and down the lineup, everyone played well. Without the puck, our checking was excellent tonight and we got rewarded."
On Skinner reaching 40 goals on the year: "We knew that, going into the game, Jack had 28 and Skinner had 38 and he got that early one in the second period that was a heck of a play. I was trying to find the right time to get him out there and obviously, it worked. It's great to see him get 40 and hand it to the guys he's playing with, too. Jack and [Reinhart] keep looking for him and get to the 40th. But it's great for him to get rewarded like that."
On if he has any hint on if Skinner will remain a Sabre: "Those things will work themselves out, I think the group overall in general, it's a really good group in there. They changed the culture, and the results are a different thing, but there's a lot more to it than that. And I credit the guys, they fought hard tonight."
AUDIO: https://wgr550.radio.com/media/audio-channel/04-06-phil-housley-post-game