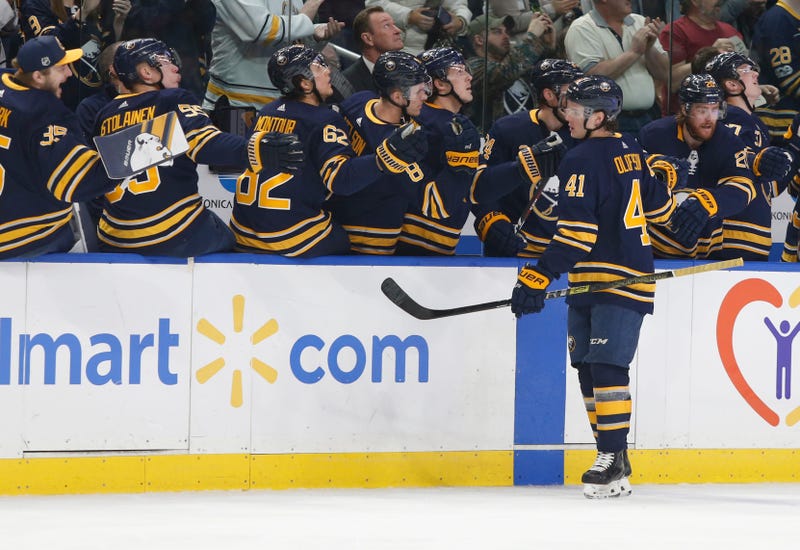 Eichel tallied three points to bring his season total to 80, becoming the first Sabre to score 80-plus points in a season since Derek Roy and Pominville in the 2007-08 season. Olofsson put together his first multi-point effort in the NHL, while Pominville scored his 217th career goal in a Sabres sweater to move up to 10th on the all-time franchise list for goal scoring. Reinhart also had a good night for Buffalo, netting a goal and an assist.

Let's head inside the locker room to see what Pominville, Olofsson, Eichel and Phil Housley said following the finale of the 2018-19 home schedule:

Jason Pominville:
They don't ask how, they ask how many: "Not the prettiest goal, but definitely nice to get one tonight. Thought our line had good looks. Thought we deserved to get one, and the reaction from the boys and the fans was amazing."
Contemplating the future: "I honestly thought about it this morning on the drive in. It really hit me, but it's been a lot of fun. I've really enjoyed every moment.  I don't know what the future holds but I'm going to savor the next couple days and hopefully we can grab another win."
On the effort in the end: "I didn't anticipate having to leave emotional this morning, that's for sure. What a way to end it. You could tell from the start of the game that the boys were dialed in."
Message to the fans: "Thank you for everything. I left in tears and returned with a smile. Again, I don't know what the future holds. I don't know what's going to happen next."
AUDIO: https://wgr550.radio.com/media/audio-channel/04-04-jason-pominville-post-game-0
Victor Olofsson:
Rasmus Dahlin knows best: "It's been a couple times for sure. It was a great pass. I was happy for that one. I think he knows exactly where I want it."
On his development: "I've been growing a lot this season. I probably needed some time down in Rochester too, especially to get used to the North American rinks. That time did me really good."
AUDIO: https://wgr550.radio.com/media/audio-channel/04-04-victor-olofsson-post-game
Jack Eichel:
On Pominville: "We knew this was a special game for him. Pominville's not one to speak up about himself too much, but we all recognized this was special for him and to him.  I've been able to build a good relationship with him these two years... He brings a good attitude to the rink every day and is a good influence on us all. He means a lot to this city, to me, this organization and this team."
What's important moving forward: "I think we tend to look at the negatives frequently; myself included in these interviews the past month or so. There's a lot we still need to get better at. Our home record is improved and that was something we did want to get better at. It was great that the fans came out one more time to support us here, and glad we made it an exciting game."
AUDIO: https://wgr550.radio.com/media/audio-channel/04-04-jack-eichel-post-game
Phil Housley:
On Pominville: "Jason is just a great guy, and great human... Great to see him contribute tonight."
Good efforts all around: "It was great to see a full building tonight and I was proud of how our guys performed in front of our fans."
Year of home performances ends on high note: "This game was important for us. It was important for us to finish strong in front of our fans. We wanted to prove our home record was real."
AUDIO: https://wgr550.radio.com/media/audio-channel/04-04-phil-housley-post-game-0