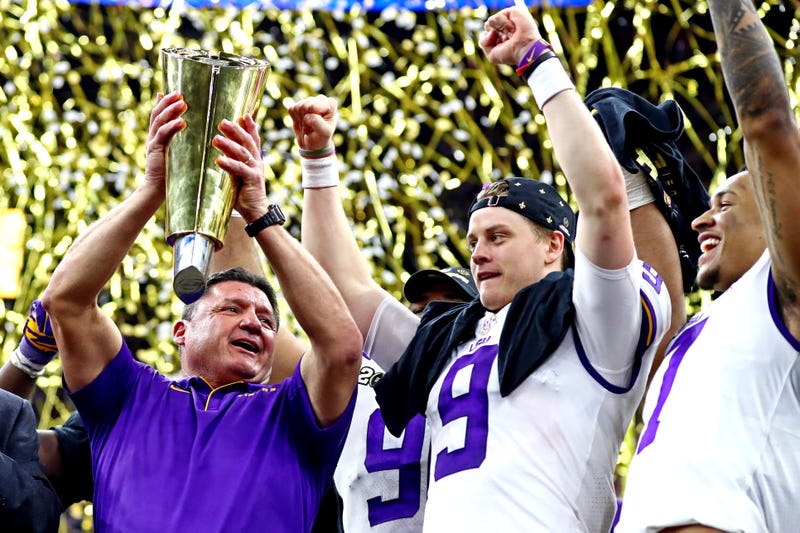 For the first time since 2007, the LSU Tigers are the national championships of college football.

LSU proved to be the mightier of the Tigers on Monday night as the top-ranked team in the nation took down the third-ranked Clemson Tigers, 42-25 at the Mercedes-Benz Superdome in New Orleans, Louisiana.

After both teams exchanged a couple of drives that ended with punts, Clemson got on the board first as quarterback Trevor Lawrence capped off a five-play, 67-yard drive with a one-yard touchdown run to make the score 7-0.

LSU responded later in the quarter as Heisman Trophy winning quarterback Joe Burrow made his first big play of the night with a 52-yard bomb to wide receiver Ja'Marr Chase down the Clemson sideline for the game-tying touchdown.

Clemson found themselves with a 10-point lead in the second quarter after a 52-yard field goal from kicker B.T. Potter, followed by a 36-yard touchdown run from wide receiver Tee Higgins on a reverse play on the very next offensive drive.

However, the lead did not last long as LSU went on to score three straight touchdowns to close out the first half.

The first touchdown drive for LSU started with another deep strike from Burrow to chase, this time for 56 yards to the Clemson three-yard line. Three plays later on third-and-goal, Burrow took off on a designed run play and scored from three yards out.

Just about four minutes later, it was Burrow and Chase connecting again for seven points as they connected in the back corner of the end zone to make the score 21-17 in favor of LSU.

Clemson then gave LSU the ball back with 3:38 left in the second quarter and the Tigers made them pay for it. Burrow and the LSU offense went 95 yards down the field on 11 plays while using 3:28 of the clock to go up 28-17 as tight end Thaddeus Moss, son of Hall of Fame wide receiver Randy Moss, found himself wide-open in the end zone for a six-yard touchdown catch.

After forcing a punt to start the second half of play, Clemson closed the gap with a three-yard touchdown run from running back Travis Etienne, followed by a successful two-point conversion attempt to make the score 28-25 LSU.

Unfortunately for Clemson, that would be as close as they would get the rest of the way.

LSU extended the lead back to 10 again with 5:13 to go in the third quarter as Burrow hooked up with Moss again for a four-yard touchdown completion towards the LSU sideline and to the pylon.

Even after a missed field goal on their next offensive drive, LSU came back and closed out the scoring for the evening in the fourth quarter with Burrow's fifth passing touchdown of the evening. This time, he connected with wide receiver Terrace Marshall, Jr. for a 24-yard strike as Marshall was able to outmuscle the cornerback defending him to get corral the throw.

From there, LSU closed things out with a fumble recovery when Lawrence coughed up the football with 3:53 to go in the contest.

Burrow was able to close out his final game at LSU with 463 yards passing in the National Championship Game, which is a new record. He also went 31-of-49 passing (63.2%) to go along with his five touchdown passes, and his six touchdowns in the contest was also a CFP championship record

As for Chase, the LSU wide receiver brought in nine receptions for the Tigers and put up an astonishing 221 yards receiving to go along with his two touchdowns.

Justin Jefferson also had a productive game for LSU, also catching nine passes for 106 yards for the Tigers.

Running back Clyde Edwards-Helaire led the way in rushing for the game with 110 yards on 16 carries for LSU.

Overall, the LSU offense ended up outgaining the Clemson offense 628-394.

On the Clemson side, Lawrence finished the game going 18-of-37 for 234 yards, but did not throw a touchdown and ended up losing a fumble. The loss marks the first collegiate loss for Lawrence since becoming the starting quarterback of Clemson last season as a true sophomore.