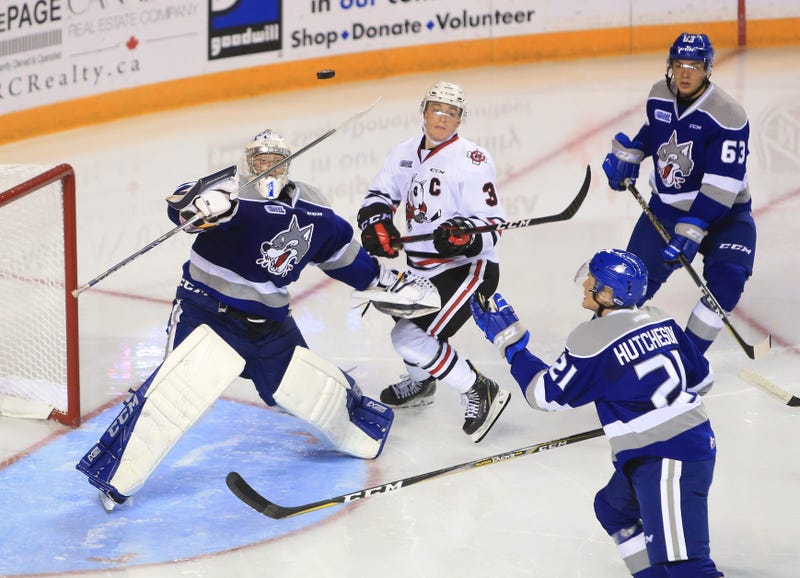 The league announced on Thursday that the 20-year-old netminder has been named as the recipient of the Red Tilson Trophy as the OHL's Most Outstanding Player of the Year as voted on by the writers and broadcasters in the league.

Luukkonen is the sixth goalie in league history to win the Red Tilson Trophy, the first since Andrew Raycroft won the award in the 1999-2000 season with the Kingston Frontenacs. The Finnish-born netminder is also recognized as the first European import player to win the league's most prestigious award.

“I am so honored to have been named the Red Tilson Award winner,” Luukkonen said in a statement released by the OHL. “There are so many great players in the OHL who could have won this award and I am humbled to have been chosen. I want to thank the Sudbury Wolves organization for giving me a chance to play. I want to especially thank my teammates, Owner Dario Zulich, [general manager> Rob Papineau, and my coaches, including goaltender coach Alain Valiquette and trainer Dan Buckland, for everything they have done for me.”

Luukkonen was selected third overall by the Wolves in the Canadian Hockey League Import Draft last summer, and decided to join Sudbury this season after spending the last several years playing junior hockey in his home nation of Finland. With the help of Luukkonen in goal, the Wolves went on to finish the regular season as the fourth-best team in the Eastern Conference. Sudbury went on to face the Mississauga Steelheads in the first round of the OHL Playoffs, sweeping them in four games. However, the Wolves ended up getting swept themselves in the second round when they faced the OHL's top team in the Ottawa 67's. In eight playoff games, Luukkonen went 4-3 with a 3.27 goals-against average and a .906 save percentage.

“We are very excited that Ukko-Pekka has been named the Ontario Hockey League’s Most Valuable Player,” Buffalo Sabres assistant general manager Steve Greeley said in the statement. “We are very happy with his development and growth within the opportunity that he was given by the Sudbury Wolves and the OHL during this past season.”

With the Red Tilson Trophy, Luukkonen is also the OHL’s nominee for the Canadian Hockey League Player of the Year honor, which will be presented at the CHL Awards Ceremony on Saturday, May 25 during the 2019 Memorial Cup in Halifax, Nova Scotia.

The native of Espoo, Finland also helped his home nation win the gold medal at the IIHF World Junior Championship this year in Vancouver after defeating the United States in the championship game. Luukkonen was also named as a Media All-Star at goaltender, posting a 4-2-0 record with a 1.80 goals-against average and a .932 save percentage.

After his season in Sudbury, Luukkonen joined the Rochester Americans in the American Hockey League, where he earned a victory in the final game of the 2018-19 regular season, making 32 saves in a 4-2 win over the Belleville Senators. However, he is currently recovering from offseason hip surgery that he's expected to make a full recovery from within the next six months. Luukkonen is expected to take over the starting duties in goals for the Amerks next season.

The Sabres selected Luukkonen with the 54th overall selection in the second round of the 2017 NHL Draft. The team signed Luukkonen to his three-year entry-level contract last June.