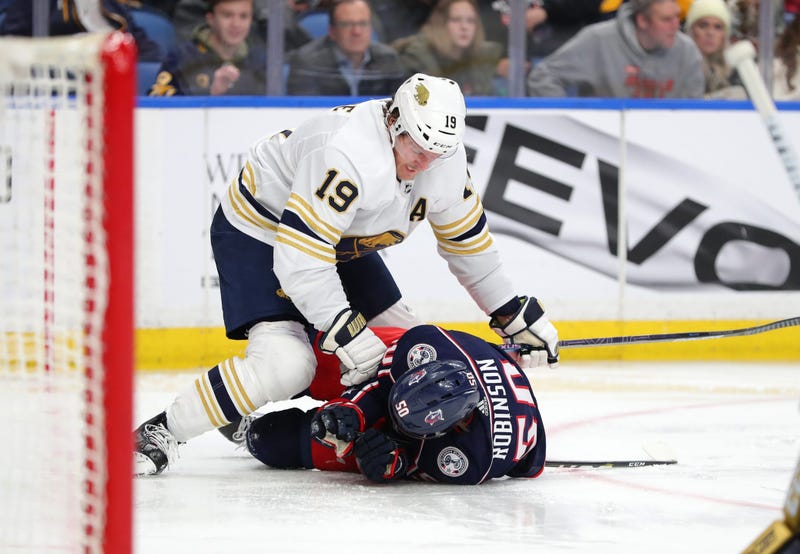 March 27, 2020 03/27/2020 7:26 pm
Buffalo, NY (WGR 550) - The Sabres and the NHL have been self-quarantined for just over two weeks. Buffalo flew home from Montreal early on March 12 and everybody dispersed from the airport. On Wednesday, March 11, everybody was getting back from dinner when it was revealed that the NBA had its first positive test for the coronavirus. Utah’s game was postponed, and the NBA immediately suspended the rest of its season indefinitely.

Jake McCabe was on WGR Sports Radio 550 on Friday speaking to The Instigators. The Sabres defenseman knew once that happened in the NBA, Thursday's game in Montreal would be off, “Once you saw that the NBA got canceled, everyone pretty much figured that there was no way that we’ll be playing that game the next day. I think at that time, San Jose had announced they were playing without fans, so I think you could see the writing on the wall as far as how this was all going to play out and it was only a matter of time.

“It was just the first of all the major sports following suit, and really that kind of created this whole stay at home thing is when the pro sports was done, I think everyone realized how serious this was.”

There are really no ice arenas open, so players can’t go to arenas to skate. Anaheim’s Ryan Getzlaf showed the media on Friday a chicken coop that he’s building. McCabe said he has been working out, trying to stay fit, “I have, in fact, been working out, but since I just got back from Chicago, which is where me and my wife spend the offseason, I have a spin-bike here, but I’ve been doing a decent amount of running outside.”

All team facilities are closed, as well as public gyms. McCabe said despite that, he knows what to do, “I’m just taking matters in my own hands. I think once you workout enough, you get enough exercises in your arsenal you can do it at home.”

Nobody knows, but there’s a pretty good chance there will be no more games for the Sabres, who weren’t going to make the playoffs. McCabe said he still has to keep himself motivated to workout, “I think some days are tougher than others just because of the uncertainty with this whole thing. It’s a weird time to be alive really, but when you sit at home and do nothing all day, it’s pretty easy to get a workout in because you can do something different than just sit on the couch, so it hasn’t been too bad to get motivated for it.”

Teammates tend to stay in touch with each other, and the Sabres have been doing that. McCabe said at this point, there isn’t much to talk about, “We’ve got our text group going and talking here and there, but there’s really not a whole lot to catch up on because everyone is just sitting at home in a holding pattern really. But all the [Europeans] got home safe, which was good, but we’ve been in quarantine for two weeks, so it’s pretty crazy how fast this has all gone.”

McCabe signed a two-year deal this past offseason, so next year he’ll be in the final year of the contract that carries with it a $2.85 million salary cap hit. McCabe just wrapped up his sixth professional season. He’ll just be turning 27 when next season is schedule to start.

The Sabres just signed Mattias Samuelsson to an entry-level deal. He is a lot like McCabe when he was coming up. Both were second round picks with McCabe being the 44th overall pick in 2012, while Samuelsson went 32nd overall in 2018.

Both played for the U.S. National Developmental team, and both captained Team USA in the World Junior Tournament, although McCabe’s team won the gold medal in 2013. The only difference is McCabe played three years at Wisconsin, while Samuelsson played two at Western Michigan.

That, I think, will put Samuelsson in the AHL a lot longer than McCabe was. McCabe only spent one season in Rochester.