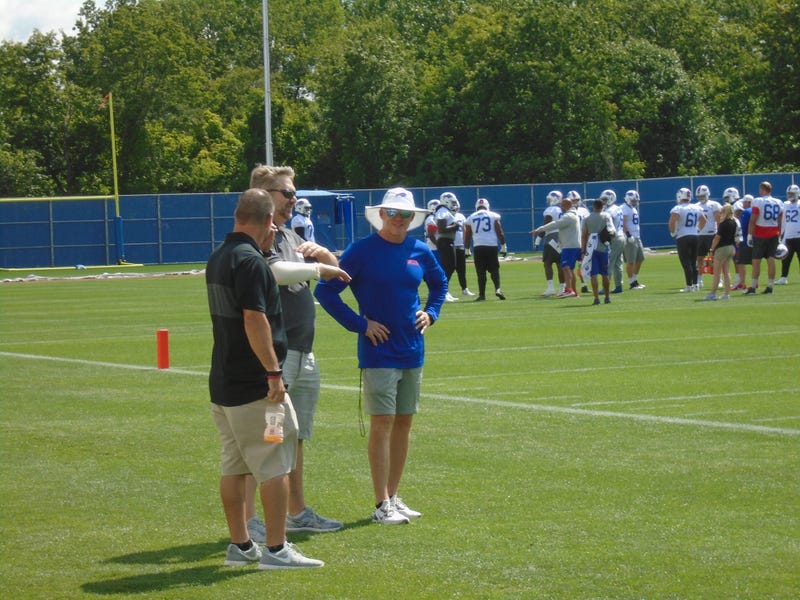 Morse is still in concussion protocol and did practice on a limited basis. Nsekhe was limited, as were Jerry Hughes, Senorise Perry, Jason Croom and Conor McDermott.

LeSean McCoy didn’t play in the first preseason game, while Frank Gore sat out the second. McDermott said both will play in the third, “Both will get more work than they’ve gotten before, but we’ll continue to talk about the plan all the way up to game time.”

With Carter injured, he will not be able to compete this week against Corey Bojorquez for the punting job. McDermott said, “The competition really remains open. I thought Cory Carter has had a good preseason at times and Bojo’s had some good moments as well, so right now, with where we are, Bojo will get the reps come game time and it will be a great opportunity for him to get sustained playing time.”

With Morse missing a lot of practice time, the offensive line has had a lot of moving parts. McDermott said, “The benefit is we’ve developed some moveable parts with guys that can change positions and have shown us the mental capability to do that and I think it’s built up a certain level of resiliency with the group.”

McDermott wouldn’t commit to how much certain players would be playing against the Lions. He did say the starters will play more than they did against Carolina, but he’ll go series by series.

It’s rare that starters play in the final preseason game, but McDermott didn’t address that.

Tight ends are getting healthier, but seventh round pick Tommy Sweeney has done a terrific job in the first two games and in practice. McDermott has liked what he’s seen, “With the small window, keeping in consideration the context that he’s played as it relates to football, he’s done a good job and he’s come out to work every day with the same energy and the same toughness, same focus and he’s developing a lot of trust at this point which is key.”

Last season, Zay Jones had 56 catches for 652 yards and seven touchdowns. McDermott said with that, Jones has earned more responsibility this season, “He’s handled it well. He’s a team first guy, he’s done everything that we’ve asked and has embraced his new role in playing special teams, but we’re still defining roles at this point, so I’ve been very appreciative at the way he’s handled it.”