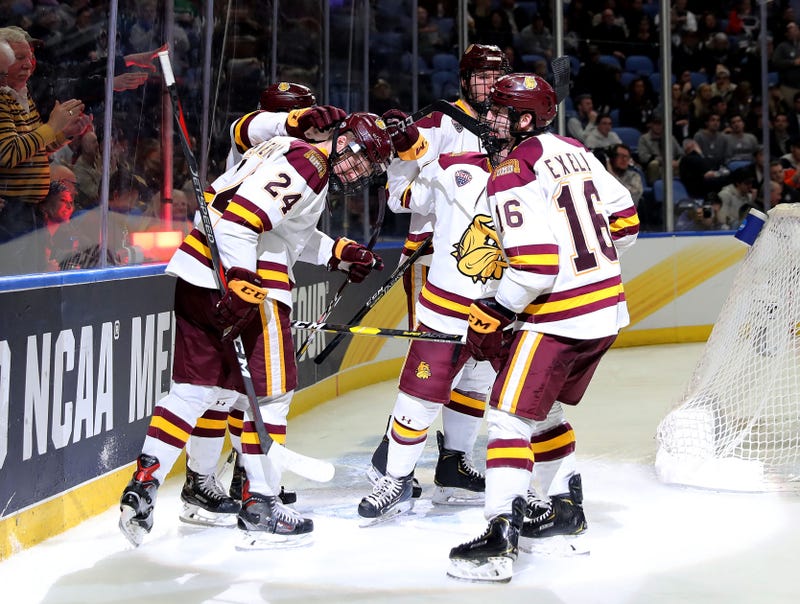 The game was close throughout as Duluth scored twice into the empty net to become the first team to get to three straight Frozen Four finals since 2008 when Boston College turned the trick.

In the first period, Providence and Minnesota Duluth pretty much felt each other out. We didn’t see many chances, but we did see two disallowed goals and quite a few hits.

The Bulldogs just had bad luck on the first disallowed goal. Providence’s Hayden Hawkey did not have the puck frozen, but the referee lost sight of the puck before Jade Miller put the puck in the net.

The second one went to a referee review that took around five minutes. The fans started booing and rightfully so. It was fairly obvious that Cole Koepke backed into Hawkey before the point shot got to him. Koepke swept the puck in on the rebound, but the damage was already done.

I think fans would accept replay a lot better in sports if they had just one minute to decide. If they can’t decide by then, you go with the call on the ice.

Bryson played fast right off the bat. The kid is listed at 5’ 9", which might be generous, but I was impressed after just 20 minutes.

On just his second shift, Bryson came from the bench down the slot, forcing Hunter Shepard into a save.

Later in the period, he flew up the left wing wall and found Kasper Björkqvist in front with Shepard making his only tough save of the period.

Bryson also looked good in a 1-on-1 situation, standing up 6’ 2", 185-pound Noah Cates and riding him harmlessly off the play.

I was hoping that a big hit by Louie Roehl of Duluth at center ice would wake the game up and it did from a physical standpoint, but not from an offensive standpoint.

Bryson was a key element in Providence tying the game in the second period. His power play rocket from the point led to Josh Wilkins' 20th goal of the season. Wilkins is an undrafted junior and will have NHL teams knocking on his door after the Frozen Four.

Minnesota Duluth opened the scoring when Justin Richards took a shot from the right wing wall and got it through the arm of Hawkey.

After the game, Bryson said he enjoyed the whole experience, especially since it was in his NHL city, “Playing in Buffalo tonight was fun and an awesome experience.”

Bryson has taken a huge leap in his play since being drafted in 2017. He said, “A big thing has been consistency, trying to be the best player on the ice every night is something I’m trying to work on and making sure I’m holding my teammates accountable as well.”

Thursday was my first opportunity to see Bryson live in a college game. He is very small, but has the strength to handle 6’ 2" forwards. He said it comes from the legs, “It comes with experience, I’ve dealt with that my whole life and I’ve learned how to take advantage of those opportunities and I have to be physical especially at my size.”

Bryson said it’s too early to think about if he’ll leave Providence a year early to sign with the Sabres. If he does, he would likely immediately join the Amerks.