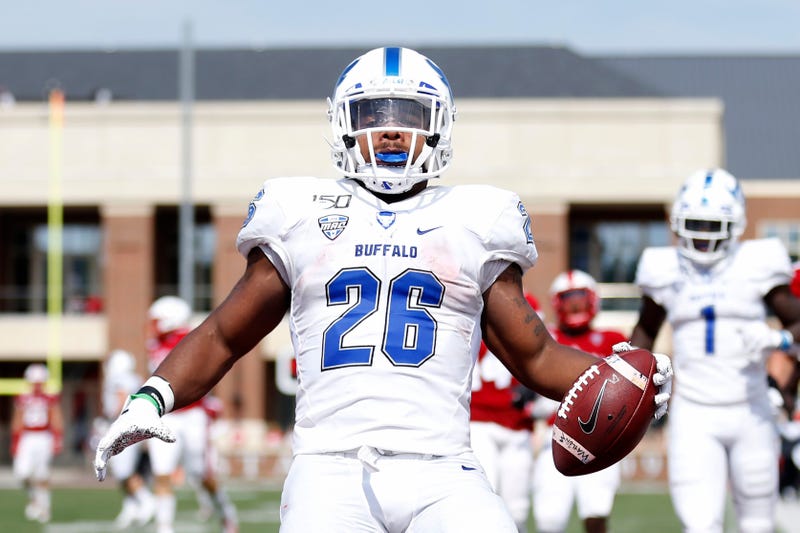 November 29, 2019 11/29/2019 4:39 pm
Amherst, NY (WGR 550) - The University at Buffalo football team (7-5, 5-3) entered its regular season finale having already clinched bowl game eligibility. However, the Bulls know as well as anyone that when you’re a team on the bowl game invitation fringe, six wins may not be enough to get a bid, making Friday afternoon’s matchup with Bowling Green (3-9, 2-6) a must-win.

Prior to kickoff, the Bulls honored the 2019 senior class before they played their final game at UB Stadium. But once the game began, it was, once again, the Jaret Patterson show.

The running back was poised for a big game. Bowling Green entered the game with second-worst run defense in the Mid-American Conference, allowing 223.5 rushing yards per-game this season. It was a very favorable matchup for the Bulls, who averaged 236 yards per-game heading into Friday, good for second in the MAC. However, Patterson surpassed that total on his own en route to the 49-7 victory.

Coming off a five-touchdown game last week against Toledo, in which he ran for a (then) career-high 192 yards, Patterson didn’t wait long to pick up right where he left off. On the first play from scrimmage, the sophomore took a handoff from quarterback Kyle Vantrease, found a hole, and went 81 yards to the end zone to give the Bulls a 7-0 lead just 18 seconds in.

That opening run put Patterson over 1,400 rushing yards for the year, while also moving him into second all-time in program history for rushing yards in a single season, passing James Starks, who rushed for 1,333 yards in 2008, and Branden Oliver, who ran for 1,395 yards in 2011.

Patterson would find the end zone two more times before the end of the first quarter. His second touchdown was a run from 30 yards out with 8:30 left to go in the opening frame, while the third was a 35-yard rushing score, extending the Bulls lead to 21-0 with 4:19 left in the period. Patterson finished the quarter with 164 yards on just six carries to go with his three scores. The Buffalo defense also set the tone early, holding Bowling Green to just 21 yards of offense and forcing three three-and-outs.

Davon Jones got the Falcons on the board early in the second quarter with a 14-yard rushing touchdown. Bowling Green had a great opportunity to cut into the deficit even more when the Bulls failed to recover a pooch kick following the score. Luckily for Buffalo, the defense came up big once again and forced a turnover on downs to keep it at a two-score game.

About five minutes of game time went by before Patterson made his way into the end zone for a fourth time. His nine-yard rushing score with 5:47 to go in the half capped-off an eight-play, 62-yard drive, during which Patterson surpassed his previous career-high single-game rushing yard total from last week.

Patterson would score his fifth rushing touchdown of the game on a one-yard run as time expired in the second quarter, extending the Buffalo lead to 35-7 at the midway point. Patterson finished the first half with 272 yards on 19 carries to go with his five scores. The incredible first half also put Patterson at 1,600 rushing yards for the year, making him the program’s all-time single-season rushing leader, passing Branden Oliver’s 1,535-yard season in 2013.

There wasn’t really much left for Patterson to do in the second half, but he kept racking-up more yards and breaking more records. He set the program’s new single-game rushing record, passing Jordan Johnson’s total of 282 yards from October 27, 2016 against Akron, with a 14-yard carry early in the third quarter, putting him at 286 for the afternoon.

When the fourth quarter rolled around and with Buffalo leading 35-7, it seemed like Patterson’s day was done. But, just 30 seconds into the final frame, No. 26 had one final score in him, another one-yard touchdown run to put a bow on his amazing sophomore campaign. Patterson’s final stat line for the afternoon ended up being 26 carries for 298 yards and six touchdowns. In the final two games of the regular season, two must-win games for UB in order to get to a bowl game, Patterson rushed for 490 yards and scored 11 touchdowns, with 10 of them coming on the ground.

Patterson’s six rushing touchdowns on Friday set a new MAC single-game record. His 17 scores this year ties him with James Starks (2008) for the most touchdowns in a single season in program history. Patterson also set single-season program records for rushing yards (1,626) and yards from scrimmage (1,835) this year. And lastly, Patterson’s 298 rushing yards and six touchdowns are the most by any player in the FBS this season.

Kevin Marks scored the final touchdown of the game when he ran into the end zone from one-yard out with 6:22 left on the clock. Going into the contest, Marks needed just 99 rushing yards to reach 1,000 for the season; he finished the game with 107 yards on 14 carries to go with his touchdown. Marks and Patterson have been a strong backfield duo for UB over the last two years, and now they’re the first Bulls teammates to rush for 1,000 yards in the same season.

Marks’ touchdown was the finishing touch on what was, arguably, the Bulls’ best offensive performance of the season. Buffalo finished the game with 586 yards, 455 of them coming via the run, a new program FBS record. Buffalo’s seven rushing touchdowns tied a school record as well.

The Bulls defense also turned in a great performance from start to finish. Buffalo held Bowling Green to just 187 total yards of offense, despite not registering a turnover or a sack. Senior safety Joey Banks led the way with eight total tackles. Banks’ fellow senior, linebacker Matt Otwinoski, finished right behind him with seven tackles.

With the 7-5 finish, the Bulls have posted back-to-back winning seasons for the first time in the program’s FBS history. The last time UB posted consecutive winning campaigns was back in 1983 and 1984 when the program was Division-III Independent.

Buffalo can now breathe a bit easier and be a lot more confident about getting a bowl game bid. While this is the third year in a row the Bulls are bowl eligible, the program has never played in a bowl game in back-to-back seasons. Of course, that’s expected to change very soon.

The Bulls will now just have to sit and wait to seen which bowl game they’ll (presumably) get invited to. Wherever and whenever that game may be, this team should be coming in with a lot of momentum, having won five of their final six games to get there.