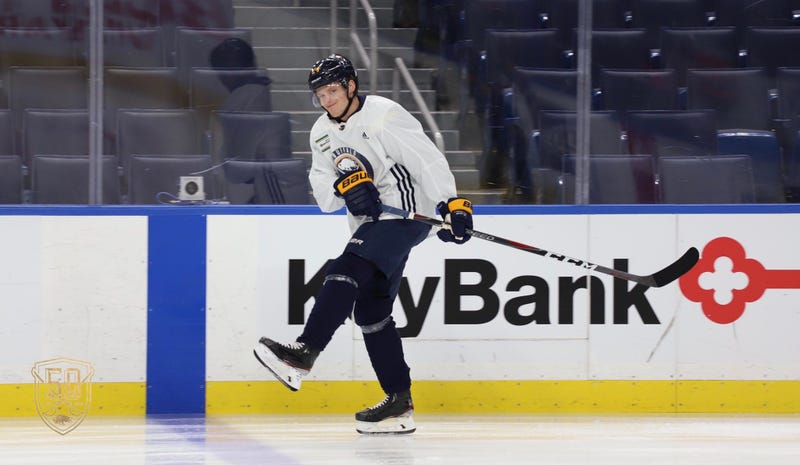 Pilut had some consistency problems near the end of last season. He also thinks his game has picked up lately with the Amerks, “I think I had a slow start, but otherwise I think I’ve been getting into my game, and lately I’ve been playing a pretty good game.”

The consistency he lacked then is something he’s really worked at in this season, “I’ve just been working on it, trying to play at that high level all the time and try to focus on my [defensive] zone play, and I think that’s been a big part of me so far. Plus, I want to keep developing that offensive skill I have.”

Pilut was injured last season in Game 3 of the Amerks' playoff series with Toronto. He had to rehab his shoulder and missed training camp. That likely contributed to the slow start, “I needed to get back into things and sometimes it takes a little while to find the flow again.”

Being injured, Pilut didn’t have an opportunity to fight for a job in training camp. He really wasn’t disappointed because he had other things on his mind, “I really didn’t focus on that. My main focus was always just to comeback and fell good again."

McCabe is listed as day-to-day with his injury. Ralph Krueger believes he’ll be back at practice on Friday. Both Jack Eichel and Kyle Okposo were given days off from the ice on Tuesday. Krueger said, “There are minor issues there where we just feel better taking three days away from any type of contact and everybody will be fine tomorrow for those two.”

Michael Frolik is still dealing with visa issues and wasn’t at practice. Krueger hopes that situation is winding down, “We’re hoping that all goes well and that he joins us tomorrow, but we won’t know that until some other issues are cleared up this afternoon. So the hope, as a coach, is you get a good day of practice with him before St. Louis.”

With Eichel and Okposo out, I didn’t take down the lines. The defensive pairs were: