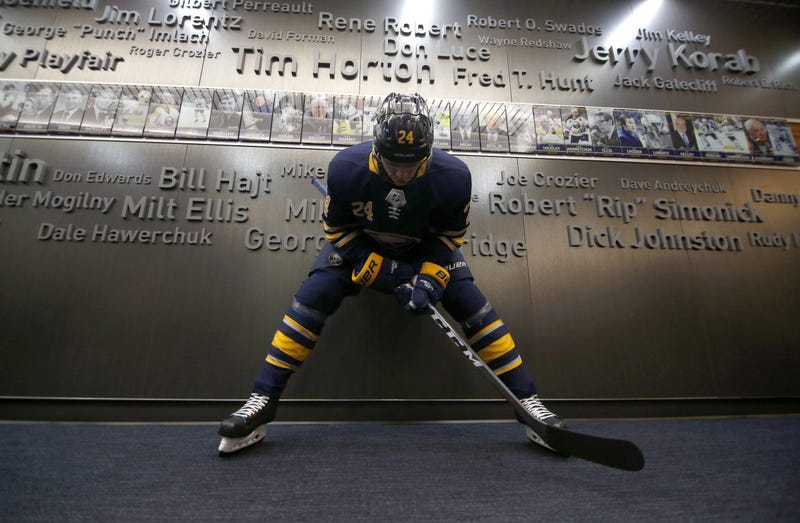 Pilut is back at practice and said, “I’m feeling good. I’m getting my strength back and I’m getting me energy back now, and I’m just trying to get back into the rhythm again.”

Getting his energy back wasn’t easy. Pilut said, “I had a rough couple of days there and then I found my way back. I got some good rest, so I’m just getting back on the ice and back having some fun out there, which gives you a lot of energy. It feels good to be back in action.”

Pilut and John Gilmour have alternated coming up and going down to Rochester this season. Pilut said, “There are different ways of seeing it. It’s a different game down there compared to up here, but I try to just focus on the present and when I’m here, I just focus on being here and doing everything I can to be in the lineup.

“It’s difficult in one way, so you just take every day and just focus on that day.” Pilut added, “I’ve been controlling my hockey in a solid way so far.”

Every time Pilut gets sent down, Jason Botterill and Ralph Krueger give him things to work on within his game. Pilut said, “They want me to work on being consistent on every shift. They want me to be on the right side of guys, which is the most important part for me. I feel very comfortable with the puck and my offensive side will come more and more, and I’ve just got to play that solid defense which I’ve been doing lately.”

We all saw the skilled shootout goal scored by Rasmus Dahlin on Monday. It was the first time in his two-year career that Dahlin had been called on to shoot and Krueger said he wasn’t surprised by the move, “He’s just got that genius in him, and he had that deception on Jack [Eichel]’s goal on the power play too. It was a lot of fun, and I think the fans had a lot of fun with it.

“I think when you get to see skill on display like that, it is a space for our fans just to see the players without resistance or any defense trying to knock them down, so that shootout was confirmation that it was a good add on during the regular season.”

Unless your name is Kris Letang, most defensemen don’t get a chance in the shootout. Rasmus Ristolainen is one-for-one in his career and Brandon Montour is two-for-four. Krueger said with a laugh that maybe you’ll see them, “We’ll keep Risto for the real big one, but for sure we’d use them. They need to be in the mix and you definitely look at the personality of the player, and Risto is somebody you’d have no problem throwing into a burning fire.”

The Sabres practice at the arena on Wednesday before leaving for Montreal.