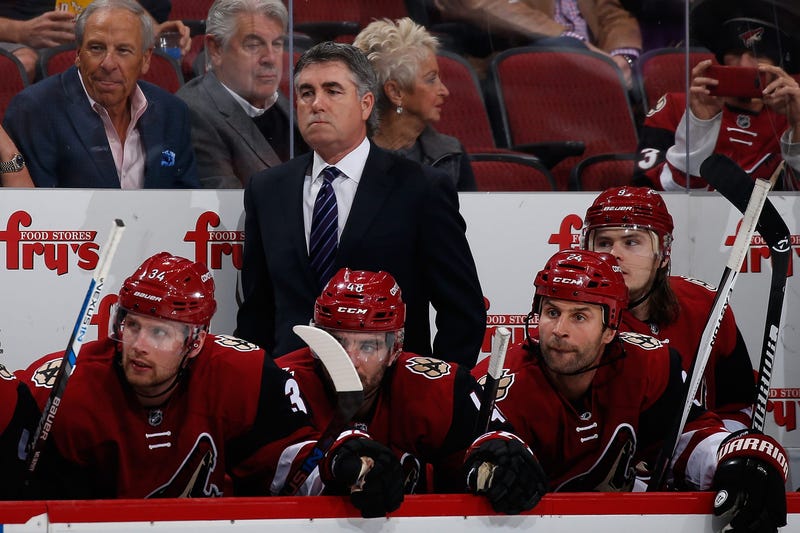 You can add Dave Tippett to the list of names that have been reported to be of interest for the Buffalo Sabres and their head coaching vacancy.

Sportsnet's Elliotte Friedman reported on Tuesday in his 31 Thoughts blog that the Sabres have interviewed former Dallas Stars and Arizona Coyotes head coach Dave Tippett for their head coaching position, and that the interview went very well.

Tippett is a very experienced head coach at the NHL level, coaching in 1,114 games with the Dallas Stars and Arizona Coyotes organization. He got his start with the Stars in the 2002-03 season, leading Dallas to a 46-17-15-4 record and a run to the second round of the Stanley Cup Playoffs. In six seasons with the Stars, Tippett put up a 271-156-28-37 record and helped lead the Stars to five consecutive playoff appearances. After missing out on the playoffs in the 2008-09 season, Dallas relieved Tippett of his coaching duties.

After Wayne Gretzky stepped down as the head coach of the Coyotes in September of 2009, the Coyotes hired Tippett as their next head coach, where he went on to coach for the next eight seasons. In the dessert, Tippett put up a 282-257-83 record and led the Coyotes to playoff appearances his first three seasons. Their deepest playoff run saw them going to the Western Conference Final in 2012, where they went on to lose to the eventual Stanley Cup champion, Los Angeles Kings in five games.

Just after the 2015-16 season, Tippett had agreed to a five-year contract extension to remain as the head coach of the Coyotes, and also serve as the Executive VP of Hockey Operations. In June of 2017, Tippett and the Coyotes mutually agreed to part ways.

Tippett is currently serving as a senior advisor to the Seattle expansion franchise set to get going for the 2021-22 season. There has been some speculation that Tippett could become the head coach for the new Seattle team when the time comes, but recent rumors have surfaced that Tippett would prefer to return to coaching well beforehand.

Friedman also add that Pittsburgh Penguins assistant coach Jacques Martin and Swedish National Team head coach Rikard Grönborg is expected to be in the mix for the Sabres as well. In addition, it was pointed out that Toronto Marlies head coach Sheldon Keefe could be a person of interest for the Sabres after the Marlies were able to sweep the Rochester Americans in the first round of the Calder Cup Playoffs.

It has also been speculated by Friedman that other teams have thought that Botterill is asking coaching candidates how they can work with Ristolainen to improve his overall game.

Keep it locked to WGR and WGR550.com for the latest on the Sabres' head coaching search.

news
Donald Trump to visit NYC hometown for 1st time post-presidency
news
How vaccines are made and why we can't just make them faster
news
Woman takes second job at nursing home to visit 87-year-old dad during COVID-19 pandemic
news
79-year-old flight attendant dies from COVID-19: 'She needed the money' to support her family
news
94-year-old couple find love during coronavirus: ‘She was worth it'
music
Here’s how to watch Meghan Markle and Prince Harry’s interview with Oprah Winfrey