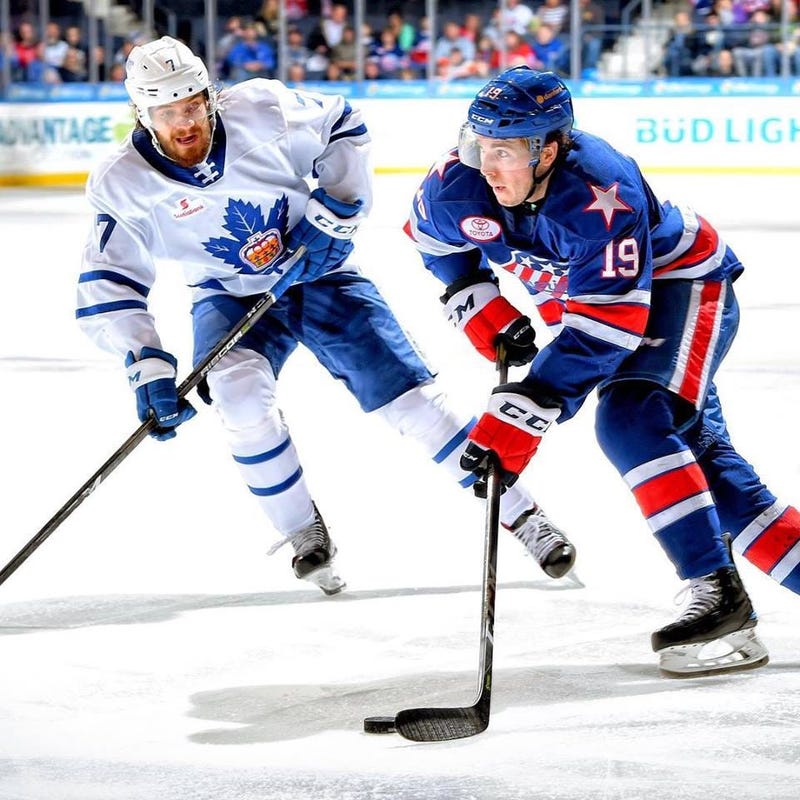 April 22, 2019 04/22/2019 1:12 am
Rochester, NY (WGR 550) - The Rochester Americans have until Wednesday to figure out how to save their season. Despite throwing shot after shot after shot at a backup AHL goaltender with bad numbers, they trail their best-of-five playoff series against Toronto 2-0.

There is absolutely no excuse for this team not to be up by two games. They have hit posts, missed breakaways and missed numerous open nets. Amerks coach Chris Taylor said, “Our looks were really good and they should be in the back of the net and that’s why we’re down 2-0 because we haven’t executed. They get one chance and it’s in the back of our net.”

Rochester spent 40 minutes playing perfect defense. They were in sinc as five-man units and Scott Wedgewood may have had two difficult saves on 12 shots. The great defense was producing numerous turnovers and great scoring chances, but Rochester just couldn't score.

At the other end, Rochester had put 30 shots on Kasimir Kaskisuo and scored twice. Michael Hutchinson’s backup came into the series with a 3.07 goals-against and a horrendous .896 save percentage, but the Amerks have made him look like Patrick Roy.

Rochester got the lead when C.J. Smith flew right around the defense and beat Kaskisuo short-side under the crossbar.

Late in the second period, Kevin Porter found himself alone and staked his team to a two-goal lead.

Everything should’ve been smooth sailing, but at 51-seconds of the third period, Porter took a bad penalty, which he has a tendency to do and eight second later, it was 2-1.

Rochester seemed to get rattled and 55-seconds after the first goal, Jeremy Brocco was left so far by himself he had time to hit the post on an empty net and get to his own rebound to tie the game.

The Amerks were shaken until they got to around the 15-minute mark and they recovered their game. They started producing quality chances again, but still couldn’t beat Toronto’s backup goalie.

It only took 2:20 of overtime to put Rochester on the brink of elimination. Porter’s line was on the ice with Smith and Wayne Simpson, and Taylor said the goal happened because of mismanagement in the offensive zone, “I wish they would’ve attacked the net. After that, we didn’t do our work up the ice. We didn’t get a holdup, they’re looking like they’ve got a 2-on-1 and we kind of got back, Reds [Zach Redmond] thought it was a 2-on-1 so he had to slide and Bracco made a good play, but we’ve got to be harder on that guy. It’s way too easy.

“Look at the points he’s getting against us, it's way too easy."

In the regular season, Bracco had 22 goals and 57 assists for 79 points and Mueller had 33 goals and 65 points, so the loose defense on them is inexcusable.

On the overtime goal, Lawrence Pilut didn’t pick up Bracco and Smith came sliding across and wound up bumping into Wedgewood, not allowing him to get over.

On the tying goal, Kurt Gosselin just stood there and watched Bracco hit the post and then tap home the rebound into an empty net.

The Amerks out-played the Marlies in both games at home, yet they trail the best of five series 2-0. Victor Olofsson has hit three posts, but has no points. Danny O’Regan, Remi Elie, Rasmus Asplund, Redmond and Pilut have combined for no goals and no assists in two games.

Chances are great, but Taylor said he needs to see more intensity, “We’ve got to get more, we’ve got to find more. We’ve got to be harder on some of their key guys that they can’t get around our net.”

As I mentioned early, Porter’s penalty was just plain dumb, especially from your captain, but Rochester can’t seem to score on the power play and their penalty killing has been bad too. Taylor didn’t want to talk about Porter’s penalty other than to say, “We’ve got to kill it off, that’s what teams do.

“Good teams kill penalties off, good teams score on their power play and we’ve got to be better in both these areas.”

So here the Amerks sit, they have a lot of shots, but three goals in two games to show for it.

Young players like Olofsson, Asplund and Pilut are learning what playoff hockey is all about. They have to figure out that they need to be just a little bit harder and have just a little more determination. Rochester has played much better on the road lately than at home, so there is no more room for error. If they don’t go on a three-game winning streak, the AHL’s third best team in the regular season will go home early.