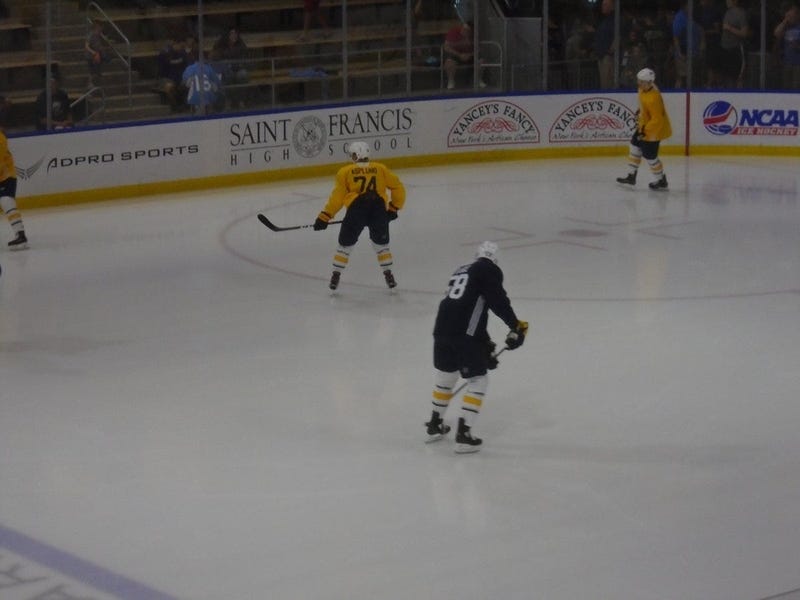 November 15, 2019 11/15/2019 2:21 pm
Buffalo, NY (WGR 550) - Johan Larsson tied Thursday’s game with 41-seconds left in regulation. He wound up getting hurt as he took a beating around the net and missed practice on Friday. Ralph Krueger did not rule Larsson out for Saturday’s game against Ottawa.

Rasmus Asplund got called up for the first time in his short career and was centering Zemgus Girgensons and Kyle Okposo. Asplund said he was ecstatic when he got the word, “You just get really, really happy. It’s an opportunity for me and I really didn’t think about it too much yet, but I think it’s going to sink in during the night.”

Asplund has felt since locker cleanout day last April that he was ready to play in the NHL. Despite having a good training camp, he was sent down to Rochester, but he was OK with that, “I wouldn’t say I was disappointed. Of course you wanted to make the team, but it’s another opportunity for me to get better and work on my game in Rochester and I really think I’ve been doing that.”

Asplund isn’t flashy and is probably Rochester’s best two-way forward. He said consistency is what he strives for, “I’m just trying to be the player that they can trust every night. You know what you’re getting when you’re putting me on the ice.”

In his first season, he learned a lot about the North American pro game, including dealing with a smaller ice surface. This year, the challenges have been different, “I’ve got a bigger role in the dressing room. I’m trying to talk more and be a leader off the ice and I think that makes me a better player too.”

I’ve always wondered if two-way players think they’re better at one end of the ice than the other. Asplund said, “When I play good defensively, my offensive game comes, so I really prioritize my defensive game.

“I do it that way because I get more pucks to my stick, I get more involved in the plays, so it gets me in the right time and place.”

There were no other changes to the lines or defense on Friday.