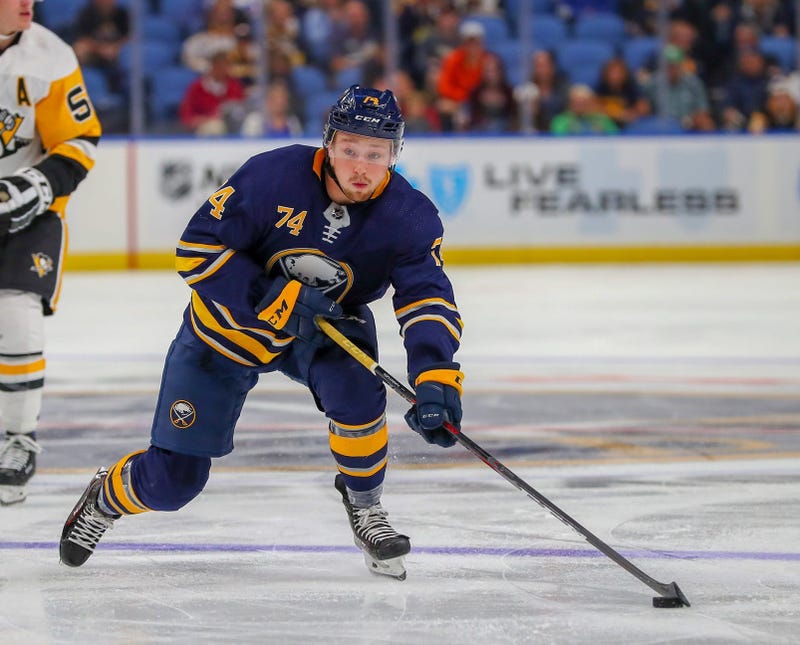 September 5, 2019 09/05/2019 6:08 pm
Buffalo, NY (WGR 550) - Rasmus Asplund will be just one of the youngsters taking part in the Prospects Challenge. Some of the other interesting players joining Asplund on Friday are Victor Olofsson, Mataj Pekar, Arttu Ruotsalainen, Henri Jokiharju, Will Borgen, Jacob Bryson, Casey Fitzgerald and Dylan Cozens.

Cozens took part in practice on Wednesday and Thursday. The team announced Thursday night that their No. 1 pick has been cleared to play. Cozens dislocated his thumb during development camp and needed surgery.

Last season was Asplund’s first in North America after four seasons in the Swedish Hockey League. In 75 games with the Amerks, he netted 10 goals and 31 assists for 41 points, with most of those points coming later in the season. The 21-year-old felt this offseason was important for him and he said he took advantage of it, “I worked on my explosiveness, my first steps because that’s the main part for me to get better if I want to take the next step to the NHL.”

Asplund also felt that he needed to work a lot on his shot.

Asplund is very close to being NHL ready, but Jason Botterill already has a logjam on the roster. Asplund said he’s ready for the competition, “It’s great, I think it’s good for everyone to have that competition and in every practice you really need to show yourself or your best side.”

Chris Taylor is a good teacher with young players. There were many things that Asplund learned in his season with Rochester, “I learned how everything works and how to adjust to the small rink and I think I just learned how to play my game at a really high pace and that shows how my season went, I started kind of slow and finished very strong.”

This will be Asplund’s sixth season of professional hockey. He said he’s glad he played in the SHL before coming over here, “It helped a lot, I had been playing against men before getting over here, so just the physical, getting used to how strong everybody is was really helpful to me.”

The one thing the Prospects Challenge does is gives some of the kids a chance to get some games in before they report to training camp. Asplund feels that’s a big advantage, “I like that and it’s a good opportunity for me to show what kind of player I am for Ralph the new coach too.”

Asplund in not a cocky kid, but he fully believes in himself and with that in mind, he feels he’s ready for the NHL right now, “I think I’m ready and that’s the goal I’m going to have going into training camp too.”

New Jersey will have the first overall pick in last June’s draft, Jack Hughes in the lineup on Friday.

We will have all three of the Sabres games for you starting with the New Jersey game. Join me, Brian Koziol and Brayton Wilson for all the action starting at 7:00.

The game before the Sabres game will feature Pittsburgh against Boston.

news
Parents name their daughter after internet provider to get free WiFi for 18 years
music
Join the Country Music Hall of Fame's 'BIG NIGHT (At the Museum)' fundraiser
news
These 2020-inspired Halloween decorations are perhaps the 'scariest' of all
news
3 members of same family die of COVID-19, 5 more sickened
music
Surf Mesa's Mom became a BTS fan waiting to hear him on the radio
news
NJ Gov. Murphy quarantining after being exposed to someone who tested positive for COVID-19