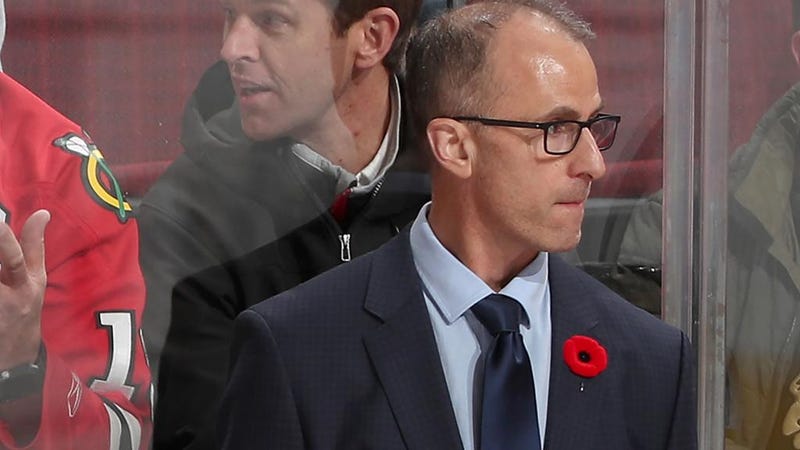 On Sept. 28, Granato was diagnosed with severe pneumonia. Granato’s brother Tony was quoted as saying that there was a time early on that they didn’t know if he’d pull through. Ralph Krueger said everybody was happy to see him, “The whole team really got a lift today with having Don join us.

“He needed to be 100% cleared before this was going to occur, and he has been cleared 100% health wise and can fully participate in the coaching of the team.”

For right now, Taylor will remain behind the bench with the forwards.

Granato has been watching the games for a while, and according to Krueger will bring a fresh perspective to the coaches.

Johan Larsson practiced on Wednesday, but Marcus Johansson didn’t. Krueger said, “It looks like Johansson will be staying behind, and Larsson will be making the trip, but still no firm decisions on if he's playing. We’ll make that decision tomorrow morning.”

The reason Johansson is staying behind is the team will not have a morning skate on Thursday and is off on Friday. They want Johansson to get some good practice time, so he’ll stay behind with Dennis Miller. Krueger said they will fly Johansson to Florida and he may play one of those games on Sunday or Monday.

The lines were shuffled on Wednesday, which means Victor Olofsson is playing with Rasmus Asplund and Casey Mittelstadt. Olofsson and Asplund, along with Danny O’Regan, formed the hottest line down the stretch in the AHL last season. Krueger said, “The history with Victor and Rasmus Asplund, they played every single minute together last season in Rochester, so those are things that we’re considering.”

Jimmy Vesey was on the wing with Jack Eichel and Sam Reinhart. Krueger tried that a few games ago and it didn’t work at all. Kruger wants to give it another look, “We have a feeling that his work has been strong and that a goal will explode him into a stronger secondary scoring position.

Boston is also home for Vesey and Eichel, and Krueger said that is a factor, “There’s some Boston energy in the group right now that is going through the whole team, and I think Jimmy has been giving us an honest effort. He’s been trying really hard on the penalty kill, but be believe we need to get his confidence up.”

Jeff Skinner has hardly played at all on Eichel’s line. The question is why hasn’t that happened?

“The combinations that we look at every day are we want to spread out our scoring. We want a certain mix of offense and defense on every unit, and we just thought that Victor brought us a strong two-way game and we don’t want to burden Skins with too much of that. He’s doing a really good job without the puck, but he needs to be able to create when he has opportunities.”

Krueger also thinks that it’s wrong to say that they don’t play together, “They have seen the best ice-time together and that's on the power play. There’s no space where you play more together than on the power play, so I disagree that he’s not playing with Eichel. He’s playing with Eichel and has the privilege predominantly to play there on the PP.”

Zach Bogosian is making the trip with the Sabres. Jason Botterill said on Tuesday that there’s a possibility to defenseman could play on the weekend.