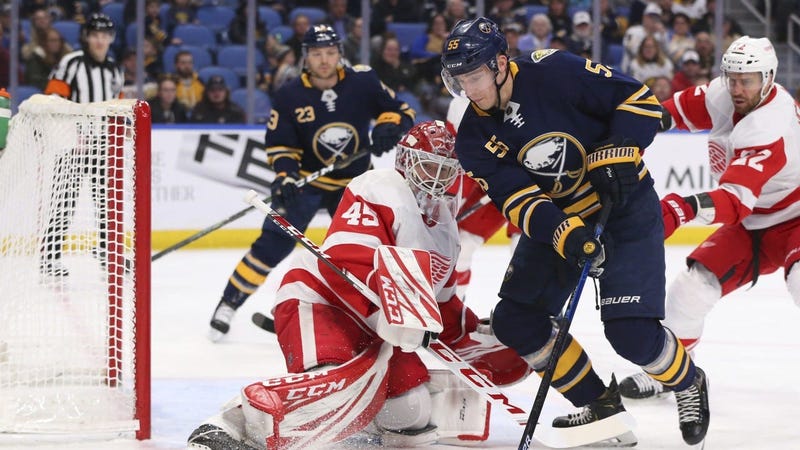 Despite another slow start and another early goal-against, the Buffalo Sabres did not let the Detroit Red Wings beat them for the second in less than a week. This time, the Sabres battled back and earned a 3-2 win on Tuesday night at KeyBank Center.

Sam Reinhart scored his 21st goal of the season to break a 2-2 tie just 57 seconds into the third period to give Buffalo the lead for good. Carter Hutton did the rest in net, making 27 saves on 29 shots faced for his second win in as many appearances.

The Red Wings put the Sabres into a 1-0 hole before the fans could file into their seats. It was Darren Helm who found a puck that was nearly covered up by Hutton and tucked it into the net to give Detroit the lead just 27 seconds into the game.

However, Buffalo tied the game up just 36 seconds later as Conor Sheary one-timed a nice feed from linemate Marcus Johansson past Red Wings goalie Jonathan Bernier for his eighth goal of the season.

Both teams continued to go back and forth for the remainder of the period with each team also getting a crack at the man advantage, but the score remained tied at 1-1 through the opening 20 minutes.

The second period was off to a fast of a start as Sheary was awarded a penalty shot after he was held up on a breakaway attempt. However, Sheary's opportunity went high and over-top of the net.

Detroit got another goal from Helm a little more than seven minutes into the period as the veteran winger got free in front of Hutton and he potted his second of the game.

It took the Sabres nearly eight minutes to find the equalizer once again, this time courtesy of Johansson with a nice wrist shot over the left shoulder of Bernier. Sabres defenseman Rasmus Dahlin started the breakout and left a drop pass to his fellow Swede on the rush, and the winger finished the play off to make it a 2-2 game.

Both teams continued to exchange chances in the period, with the Sabres outshooting the Red Wings by a 20-19 total through 40 minutes.

It didn't take long for Buffalo to take their first and only lead of the game in the third period as Reinhart was able to jam in a loose puck in the Red Wings crease to make it 3-2. As a point shot from Henri Jokiharju was fired wide of the net, the puck was put on net by Jack Eichel before being finished off by Reinhart. The goal was discussed briefly by the officials in front of the time keeper's bench, but it was confirmed to be a good goal.

The Red Wings put up a considerable amount of pressure in the third period, and outshot Buffalo 10-5 in the final 20 minutes and created several dangerous chances shorthanded that Hutton had to make strong saves on to preserve the lead and seal up the win.

Buffalo's homestand continues with a matchup against the Columbus Blue Jackets on Thursday night at KeyBank Center. Faceoff is set for 7 p.m. with the Paul William Beltz Pregame Show starting at 6 p.m. with Mike Schopp and the Bulldog at (716) Food and Sport on WGR.