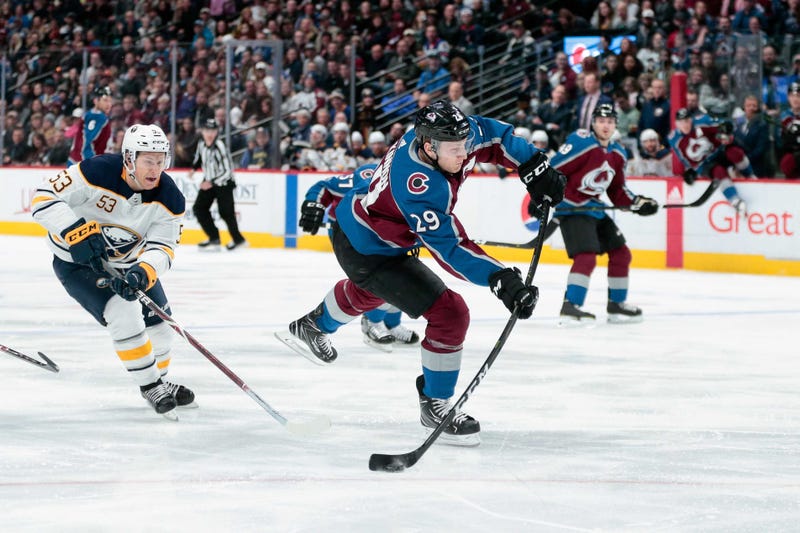 An absolutely miserable performance by the Buffalo Sabres resulted in a 3-0 loss to the Colorado Avalanche at the Pepsi Center on Saturday afternoon.

The blue and gold had just one period where they totaled more than four shots on goal; an 11-shot third period. Colorado's lowest shot total was in the first period, where they put 12 pucks on Carter Hutton. The Sabres were out-shot 43-18 for the game, and handed Avalanche netminder Philipp Grubauer his sixth career NHL shutout.

Buffalo's road losing streak also continues with their ninth consecutive loss away from KeyBank Center. The last road win for the Sabres came back on January 29 against the Columbus Blue Jackets at Nationwide Arena.

It was a sleepy beginning to this game for both teams with just 16 combined shots on goal, with many of them not coming of the high-danger variety.

It wasn't until Colorado defenseman, and former Sabres first round pick Nikita Zadorov drilled Jack Eichel with a hit after a late whistle that got the game turned up another level. Marco Scandella, Jeff Skinner and Sam Reinhart were all there to jump into the fray to defend their captain. Skinner received a roughing minor; so too did Zadorov and Mikko Rantanen of the Avalanche. That gave the Sabres a power play, which they failed to generate much of anything in terms of scoring chances.

With just 2:30 left in the period, Reinhart was sprung for a breakaway fresh out of the penalty box, where he was serving a minor for hooking. Reinhart made a backhand-to-forehand move, but Philipp Grubauer stuffed Reinhart with a pad save. This scoring chance was the best of the first 20 minutes for either side as the teams broke for the first intermission.

The game's first goal came off the stick of Avalanche forward Nathan MacKinnon at the 3:14 mark of the second period. MacKinnon started the play by intercepting a chip pass attempt from Rasmus Dahlin to Eichel. He then absorbed a back-check from Eichel on his way to the Sabres' zone, then ripped a wrist shot to the top right corner above the glove of Hutton. It was MacKinnon's 35th goal of the season.

The Avalanche continued to put up more pressure following the goal as forward Alexander Kerfoot had a pair of golden opportunities; his first shot produced a big rebound off Hutton. Kerfoot's pass attempt to Tyson Jost was foiled by a stick-check from Conor Sheary as Jost was looking at a gaping net.

With 5:12 remaining in the middle stanza, Eichel was penalized for an illegal check to the head of Avalanche forward Carl Soderberg. The two met each other in the neutral zone and Eichel caught the side of Soderberg's head with his right shoulder. The Sabres were able to kill off the two-minute penalty, but still found themselves searching for an answer offensively.

Through 40 minutes of action, the score stood at 1-0 in favor of Colorado. The Avalanche also led in overall shot totals at 26-7.

After Dahlin and Colorado forward J.T. Compher got two-minute roughing minors following a minor scrap, and then Johan Larsson took a slashing minor at the 10:34 mark of the third period, the Avalanche had just under a minute of work on a 4-on-3 power play. They capitalized with just six seconds left on the man advantage as Rantanen potted his 30th goal of the season. It was Colorado's 35th shot of the afternoon, while Buffalo had just nine shots against Grubauer.

The Sabres ended up throwing nine shots on goal in nearly six minutes of action to close out the game, but the effort was too little, too late. Buffalo gave up an empty-net goal with 1:10 to play in regulation to Colorado's Gabriel Bourque. It was Bourque's first in 68 games to make it 3-0.

The Sabres come back home for a Tuesday night matchup with the Dallas Stars. Mike Schopp and the Bulldog will get you ready with the Paul William Beltz Pre-Game Show at 6 p.m. from (716) Food and Sport. Puck drop from KeyBank Center is set for 7 p.m. on WGR Sports Radio 550.