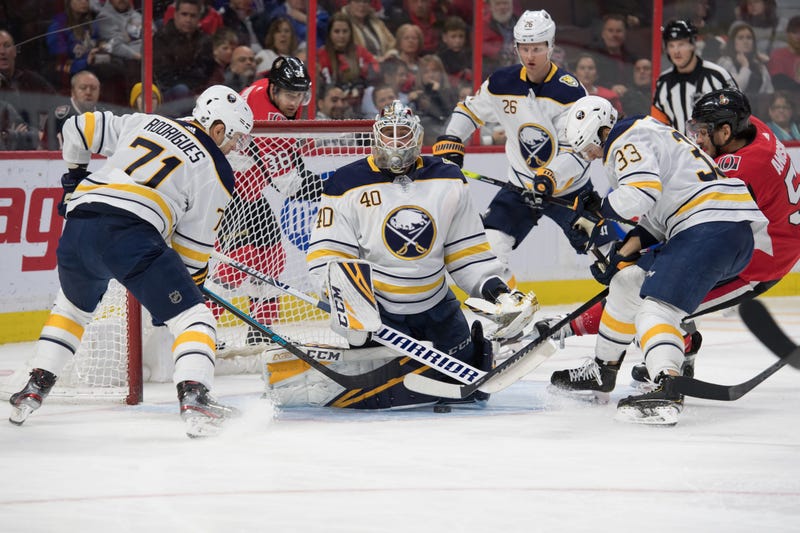 For the second time in less than a month, the Buffalo Sabres could not solve the lowly Ottawa Senators.

The story remained the same from the last meeting between these Atlantic Division adversaries: timely saves eluded the Sabres, as did their special teams play in a 7-4 loss at the Canadian Tire Centre in Ottawa.

On Jan. 28, Buffalo allowed three power play goals against the Senators in a matchup at KeyBank Center. Tuesday night saw the Sabres double down as Ottawa went perfect on the man advantage and also scored a pair of shorthanded goals to also take the season series between the two teams.

The Sabres snatched an early 1-0 advantage just 2:14 into the contest when Jeff Skinner put in some strong work around Senators goalie Craig Anderson. The puck came loose after a chance from Skinner went wide, and defenseman Brandon Montour was there to clean up the mess for his fourth goal of the season.

Montour wasn't done there as 12 seconds past the halfway point of the first period, the defenseman struck for his second goal of the night. The Sabres were, once again, buzzing after a Senators turnover in their own defensive end, and the puck reached defenseman Rasmus Ristolainen. Ristolainen then fed Montour for a one-time blast from the left point, giving Montour his fifth goal of the 2019-20 campaign and giving Buffalo a 2-0 edge.

Just as quickly as the Sabres took a multi-goal lead, the Senators answered back to take the lead.

In a span of 74 seconds from the 14:02 to 15:16 mark of the period, Ottawa responded with a shorthanded goal from forward Vladislav Namestnikov, and then a pair of even strength tallies from forwards Artem Anisimov and Drake Batherson. Anisimov and Batherson's goals came just nine seconds apart and helped vault the Senators ahead of the Sabres, 3-2.

The home side wasn't done in the first as Anisimov struck again before the intermission to double the Ottawa lead to 4-2. It was the veteran's 13th goal of the season as the Ottawa flood continued after such a strong start by the Sabres.

The Sabres formulated a strong response to start the second period, striking inside the opening three minutes of the frame to cut the deficit to 4-3. It was Johan Larsson who fed a driving Kyle Okposo, who crashed the net and beat Anderson to with a tap-in goal.

Montour received a secondary assist on Okposo's goal, giving him a hand in the first three Buffalo goals of the evening. For Okposo, it was his second goal in as many games dating back to Sunday night's 5-2 home win over the Toronto Maple Leafs.

Ottawa maintained distance between themselves and Buffalo later in the second, as forward Jean-Gabriel Pageau increased the Buffalo deficit to 5-3 with nine-minutes gone in the period. A bouncing rebound was coughed up by goalie Carter Hutton in front of his net, and the puck ended up bouncing off of Pageau and in.

The Sabres closed the gap again on the man advantage just 4:47 later when forward Victor Olofsson let go of a rocket from the right faceoff circle for his 19th goal of his rookie season. The goal was also his 11th on the power play this season to make the score 5-4.

That score held until there was 12:53 left in regulation when Ottawa took, yet, another two-goal lead.

The Senators took to the power play after a questionable hooking call against defenseman Jake McCabe, and it took just 32-seconds for Pageau to net his second of the night for Ottawa as the veteran scored on the man advantage.

It was the Senators' fifth power play goal in the last six attempts against the Sabres dating back to their meeting on Jan. 28.

Buffalo got a late 6-on-4 opportunity with Namestnikov in the box for Ottawa and Hutton on the bench for an extra attacker, but the Senators scored shorthanded again with an empty net goal from Anthony Duclair for his 22nd goal of the season to make it 7-4.

The Sabres have the rest of the work week off from game action before taking on the Pittsburgh Penguins on Saturday afternoon at PPG Paints Arena. Faceoff is set for 1 p.m. with the Paul William Beltz Pregame Show with Joe DiBiase starting at noon on WGR.