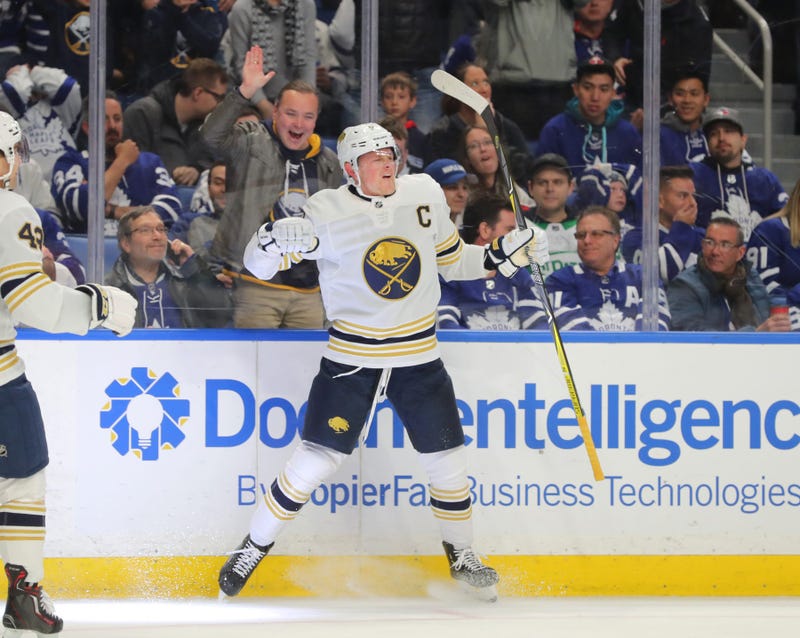 For the final time in the 2019-20 season, the Buffalo Sabres will match up with the Toronto Maple Leafs, this time at the friendly confines of KeyBank Center.

In the first matchup of the season back on Nov. 29 in Buffalo, the Sabres walked away with a 6-4 win in a fast-tempo game that saw Buffalo score four unanswered goals in the second period. That night saw Jack Eichel put up a three-point night with two goals and an assist, while Jimmy Vesey (1+1) and former Sabres defenseman Marco Scandella (0+2) each had a multi-point game in the win. Other goals from Buffalo came off the stick of Jeff Skinner, Casey Mittelstadt and Victor Olofsson.

In the other two matchups this season in Toronto, the Leafs claimed victory in both of those matchups, winning 2-1 in overtime on Nov. 30, followed by a 5-3 win at Scotiabank Arena on Dec. 17.

It has been nearly two months since both teams met one another and both teams sit in different situations in the standings.

The Sabres currently sit with a 26-24-8 record with 60 points in the Atlantic Division standings. They sit 10 points back of the Maple Leafs, who are 31-20-8 this season and have 70 points. In the Wild Card standings, the Sabres sit 11 points back of both the Columbus Blue Jackets and the Philadelphia Flyers, who have 71 points in the top-two Wild Card spots in the Eastern Conference.

However, entering Sunday night's matchup with Toronto, Sabres head coach Ralph Krueger feels that his group is much better suited to take on the likes of this Maple Leafs group.

"The depth in the forward group helps us a lot to feel the potential of playing a four line game, which is something we were really good at early in the season," Krueger said before Sunday's matchup. "We just never seemed to get it back since Sweden. From Sweden to now, it's the first time we're actually sitting and looking at the lineup feeling comfortable with four lines that can play against anybody in the other group, and so it's a lot easier to manage rhythm versus matchups. In the game today, it's always a balance when you're at home. How much do you invest in matchups and how much do you invest in the rhythm of your own team? I think we've done really well when we've been able to concentrate on rhythm and pace, and let lines share responsibilities like playing up against [Auston] Matthews and [John] Tavares tonight, two of the elite lines in the whole National Hockey League, but we feel all four lines can do that today. That's the different feeling since just a few games now that we've had back."

Buffalo is going to get, at least, one healthy body back in the lineup on Sunday in Marcus Johansson, who missed Thursday night's matchup with the Blue Jackets due to a lower-body injury. He was skating on a line with Jimmy Vesey and Curtis Lazar on Saturday when the team took to the ice for practice.

However, Krueger did provide an update on a couple of other players who are likely game-time decisions for Sunday night's matchup.

Forward Michael Frolik missed practice on Saturday with an illness, and is still feeling the effects of his sickness.

Meanwhile, after taking Saturday off for a maintenance day, goalie Carter Hutton took to the ice on Sunday morning to get a gauge at if he will be able to play for the Sabres against the Maple Leafs. Hutton has played very well in six career games against Toronto, going 3-1-1 with a .925 save percentage. His last matchup with the Leafs came in the team's 2-1 overtime loss on Nov. 30, where he stopped 41 of 43 shots faced to help earn his team a point.

If he is good to go for Sunday, Hutton will be the likely starter in goal against the Leafs.

If he is not ready to play, then it will be Jonas Johansson's turn to take the net for Buffalo. The 24-year-old has made three appearances for the Sabres in his short time up in Buffalo, going 0-1-1 with a 2.78 goals-against average and a .889 save percentage. In his last start last Sunday against the Anaheim Ducks, Johansson gave up three goals in the opening 12 minutes of the game, but was able to shut the door the rest of the way to give his team a chance. However, the Sabres could not fight back to tie the game and ended up losing, 3-2.

Goalie Andrew Hammond was called up from the Rochester Americans on Saturday to practice with the team, and will serve as Johansson's backup if Hutton is unable to go for Buffalo.

Here's a look at the lines that we could be seeing for Sunday's matchup:

Defenseman John Gilmour was called up from the Amerks to be the team's seventh defenseman going forward, but he rotated in on Saturday, which will make him a likely scratch on Sunday.

Eichel has always had a flair for the dramatic when he faces the Maple Leafs. In his 16-game career against Toronto, the 23-year-old has scored 13 goals and picked up nine assists for 22 points. His 13 goals against the Leafs is more goals than against any other opponent in the NHL. In seven home games against the Leafs, Eichel had played some of his best hockey with seven goals and four assists for 11 points.

The Buffalo captain is approaching a milestone of his own on Sunday, needing one assist to eclipse the 200-career assists mark.

Olofsson had a statement game in his return from a lower-body injury back on Thursday night, scoring two goals against the Blue Jackets, including the game-winner in overtime to give Buffalo a 4-3 win. His overtime goal was the first of its kind in his career, and it gave him his fourth game-winning goal of the season.

Looking around the league, the 24-year-old is all alone in second place among rookies with 18 goals this season, only trailing Chicago Blackhawks forward Dominik Kubalik, who has scored 23 goals. Olofsson is on pace to score 28 goals this season, despite missing 15 games with his injury. If he had not missed any time and played an entire 82-game season, the scoring winger would be on pace for 34 goals.

Sabres defenseman Rasmus Dahlin has also had a good start to his young career, especially against the Maple Leafs with five points (1+4) in five career meetings. In his only game against Toronto this season on Dec. 17, the 19-year-old had a goal and an assist in the losing effort.

On Thursday, Dahlin continued to move up the list for most points recorded by an NHL defenseman before his 20th birthday, surpassing former California Golden Seals defenseman Rick Hampton with his two assists to move him to 78 points (13+65). He trails only former Sabres defenseman Phil Housley (132 points) and former Boston Bruins defenseman Ray Bourque (79) on that list, and he still doesn't turn 20 until April 13.

Kyle Okposo is on the verge of a personal milestone of his own on Sunday, needing one more point to reach the 500-point mark of his NHL career.

As for the Maple Leafs, they are coming off a 4-2 win on Saturday over the Ottawa Senators on the road at the Canadian Tire Centre. Auston Matthews scored his 42nd goal of the season in the first period of the win, while the team also got goals from defenseman Jake Muzzin, and forwards William Nylander and Mitch Marner. In goal, it was newly acquired goalie Jack Campbell turning away 25 of 27 shots faced to earn his third win with the Maple Leafs since his acquisition on Feb. 6 from the Los Angeles Kings.

With Campbell playing on Saturday in Ottawa, the Maple Leafs will turn to Frederik Andersen in goal against the Sabres on Sunday. The 30-year-old netminder is just coming off a neck injury suffered on Feb. 3, and returned to the lineup on Thursday in a 3-2 loss to the Dallas Stars.

Once again, it is Matthews leading the way for the Maple Leafs in scoring this season with 42 goals and 29 assists for 71 points in 59 games. The 22-year-old currently sits tied for the league-lead in goals with Bruins forward David Pastrnak, and his 71 points ranks him 10th in the league, just two points behind Eichel.

Right behind Matthews in team scoring is Marner, who has 15 goals and 44 assists for 59 points in 48 games. He is on pace for an 87-point season this year, despite missing some games earlier in the season due to injury. However, if he had played out an entire 82-game season this year, the 22-year-old would have been on pace to eclipse the 100-point mark for the first time in his career.

Both William Nylander (26+25) and John Tavares (23+28) are tied with 51 points this season, and have been able to help contribute to the Leafs' offense that is currently the second-highest scoring offense in the NHL with 208 goals this season. That currently has them one goal behind the Tampa Bay Lightning for the top spot in the league.

Tavares is currently riding a seven-game point streak for the Leafs with 10 points (5+5) in that span.

Where the team is hurting right now is on the blue line with, arguably, their best defenseman, Morgan Rielly out of the lineup with a foot injury. At the time of his injury, the 25-year-old had three goals and 24 assists for 27 points in 46 games played. It was last season where Rielly really showed his potential on the blue line with his first-career 20-goal season and a career-high 72 points in 82 games.

Toronto's power play also ranks tied for third in the NHL, going at a flat rate of 25.0% for the season. They trail the Edmonton Oilers (29.4%) and Boston Bruins (26.1%) at the top, while currently being tied with the St. Louis Blues.

Buffalo currently ranks as the 20th best power play in the NHL at a rate of 19.3%, however, the Sabres did go 1-for-1 on the power play on Thursday night with the return of Olofsson to the right wing spot on the top unit.

Aside from goaltending, Toronto's other woes have come on the penalty kill this season, ranking just 23rd this season with a conversion rate of 78.2%. However, Buffalo ranks worse than the Leafs in that department, sitting 29th overall in the league at a 75.0% rating.

Be sure to tune in to the Paul William Beltz Pregame Show starting at 6 p.m. with Joe DiBiase, where you will hear more from Krueger, Curtis Lazar and Brandon Montour.