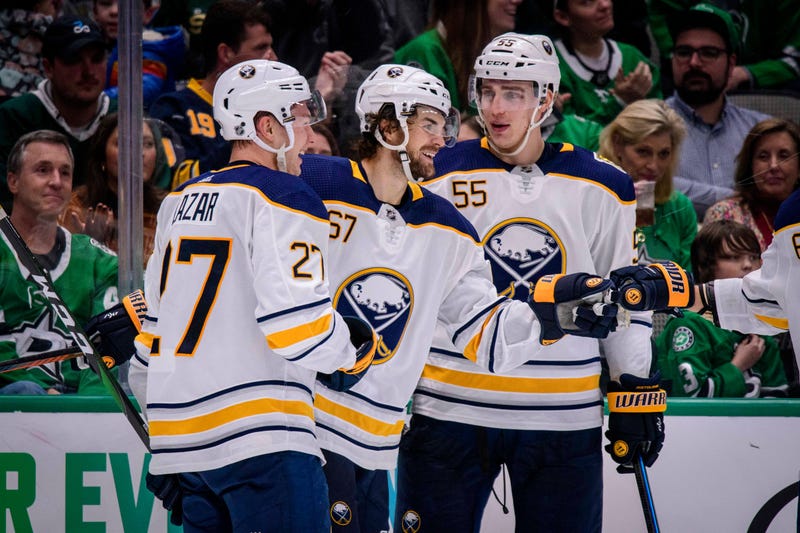 The Buffalo Sabres weathered the storm in, what was, a lopsided second period of play, and emerged with their first win in Dallas, Texas since 2009.

The blue and gold defeated the Dallas Stars, 4-1 on Thursday night at American Airlines Center, thanks to timely goal scoring from Jimmy Vesey, Rasmus Dahlin, Michael Frolik and Zemgus Girgensons.

Vesey got the scoring started as he was the recipient of a nifty, no-look pass from Sam Reinhart to the right of the Dallas net. Reinhart skated through the slot, and dished the puck back against the grain to a streaking Vesey, who tipped the puck past Ben Bishop to give the Sabres a 1-0 lead. The goal was Vesey's sixth goal of the season.

On the play, Jack Eichel received a secondary assist, which extended his current point streak to nine games.

That was the only goal scored in the opening 20 minutes of play as both teams traded chances. Neither side converted on their power play opportunities, as the Sabres and Stars each went 0-for-1 with the man advantages.

The Stars found the equalizer just 4:28 into the second frame as captain Jamie Benn won a net-front battle with Johan Larsson and deposited a rebound off the back boards off the shot by defenseman Miro Heiskanen. Sabres goalie Linus Ullmark was a bit aggressive on the Heiskanen chance, and eventually found himself out of position when he failed to get a piece of the shot that missed the net.

Dallas turned up the pressure in a big way after they tied the contest. At one point late in the period, the home side was outshooting Buffalo 14-1, and had a stranglehold on all such possession.

The Sabres were able to withstand the constant pressure from the Stars, and eventually re-took the lead with less than four minutes to go in the period.

It was Dahlin who put Buffalo back ahead as he got a wrist shot from the point to beat Bishop top-shelf with Curtis Lazar providing the screen in front of the net. Despite the lack of effort in the shot department, Buffalo took that 2-1 lead into the third period of play.

The Sabres stood pat against an unforgiving Stars attack in the third, and ended up only giving up five shots on goal.

With the score still 2-1 heading into the final minutes of regulation, the Sabres potted two empty-net goals to put the game away, courtesy of Frolik and Girgensons.

For Frolik, it was his first goal since joining the Sabres.

The Sabres head to Nashville for a weekend battle with the Predators on Saturday night at Bridgestone Arena. It will be the last game for Buffalo before their scheduled bye week, as well as the NHL All-Star break. Faceoff is set for 8 p.m. with the Paul William Beltz Pregame Show starting at 7 p.m. with Brian Koziol on WGR.