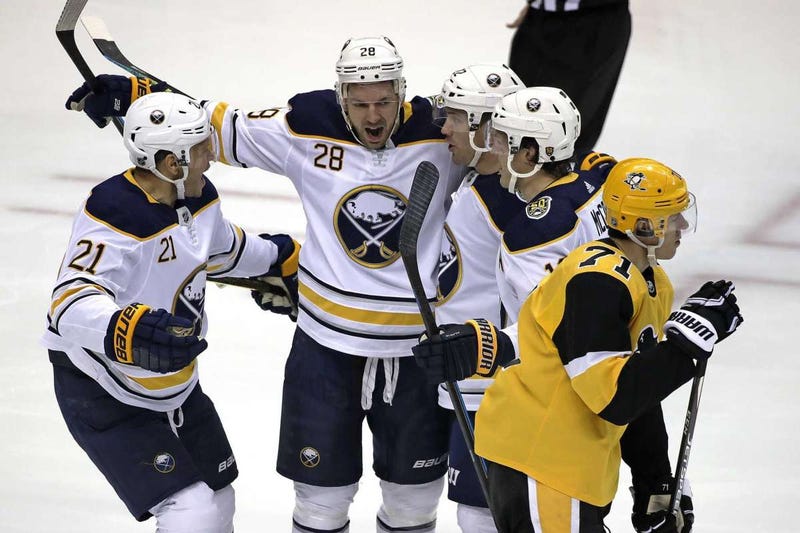 After a disappointing 7-4 road loss to the Ottawa Senators on Tuesday night, the Buffalo Sabres had some time to recuperate and get ready for a Saturday matinee matchup with the Pittsburgh Penguins.

That time off from game action ended up paying off for the Sabres as they score early and often in a 5-2 win over the Penguins at PPG Paints Arena in Pittsburgh.

Leading the way for Buffalo was captain Jack Eichel, who finished the afternoon with two power play goals, while Jeff Skinner was able to finally end a 22-game goalless drought with his 12th goal of the season in the third period.

It didn't take the Sabres long to take the early 1-0 advantage when Zemgus Girgensons potted his 11th goal of the season just 14 seconds into the game. The 26-year-old managed to get to the front of the net, and linemate Kyle Okposo managed to feed a nice pass from behind the net to Girgensons, who fired his shot through the five-hole of Penguins goalie Tristan Jarry.

A little more than six-and-a-half minutes later, the Sabres increased their lead to 2-0 off a beautiful all-around effort from Sam Reinhart. The Buffalo winger managed to steal a Kris Letang pass just outside of the Penguins' blue line and go in for a short breakaway on Jarry. Reinhart then put his shot up and over the short-side blocker of the Pittsburgh netminder for his 22nd goal of the season.

Nearly three minutes later, the Sabres were gifted their first power play chance of the game as Penguins forward Evgeni Malkin went to the box for slashing.

It only took a little over a minute for Buffalo to capitalize on the man advantage with Eichel's 34th goal of the season. After some good puck movement in the Pittsburgh zone, defenseman Rasmus Ristolainen found Eichel at the top of the left faceoff circle completely uncovered. The Sabres captain was able to walk in and get a shot off that beat Jarry past the short-side blocker hand to extend the Sabres' lead to 3-0.

Jack Eichel PPG 3-0. I can't believe how much time and space they gave him. #Sabres50 #LetsGoPens pic.twitter.com/31ltoa3DVE

With a secondary assist on the goal, Reinhart was able to pass the 50-point mark on the season, joining Eichel as the only two players on the Sabres roster with 50 or more points this year.

Pittsburgh was given a chance to get back in the contest when Sabres defenseman Colin Miller was penalized for roughing after coming to the defense of forward Marcus Johansson, who took a strong hit from Penguins forward Patric Hornqvist in the Penguins end. Despite getting a few good chances, including one from captain Sidney Crosby that was stopped by Sabres goalie Carter Hutton's shoulder, the Penguins failed to convert on the man advantage.

The Sabres finished the first period of play in front 3-0, and looked like the better team in the opening 20 minutes despite being outshot 12-10.

The Penguins responded with a strong start to the period with some sustained zone time in the Buffalo end.

Buffalo was able to get a chance to extend the lead to 4-0 when Penguins defenseman Justin Schultz was penalized for tripping Victor Olofsson, but the Sabres didn't do enough to generate any quality scoring chances.

Less than a minute after Pittsburgh killed off the penalty, Malkin helped pull the Penguins back to within two as he converts off a Henri Jokiharju turnover in the Buffalo end. Malkin was able to take the puck off the boards and get defenseman Jake McCabe to overcommit to block a possible pass, and then fired a shot past the blocker of Hutton to make it a 3-1 game in favor of Buffalo.

The Penguins ended up outshooting the Sabres again in the second period, 13-11, but the Sabres managed to hold Pittsburgh to just a goal through 40 minutes of play.

The Sabres were able to re-gain their three-goal lead at the 5:39 mark of the third period when Skinner snapped a career-long 22-game goalless drought to give Buffalo a 4-1 lead. As Buffalo entered the Penguins zone on an offensive rush, Johansson controlled up puck at the blue line while Skinner attempted to get into scoring position. As Skinner was able to get enough room past forward Sam Lafferty, Johansson threw the puck towards the net and Skinner was able to re-direct the puck through the five-hole of Jarry for his 12th goal of the season.

After killing off another penalty later in the period, the Sabres went back to work on the power play after Penguins forward Brandon Tanev retaliated with a cross-check to Jake McCabe after the defenseman laid a nice body check on him.

It took Buffalo just 51 seconds to make it a 5-1 score as Eichel fired home his second power play goal of the game. With Ristolainen camped out in front of the net and providing a screen for Jarry, Eichel was able to fire in a wrist shot from where he scored his first goal for his 35th goal of the season.

Malkin was able to add another goal for the Penguins with just 2:03 remaining in the game to cut the deficit to 5-2, but it was not enough as the Sabres managed to come out of Pittsburgh with the win.

The Sabres return home on Sunday for a matchup with the visiting Winnipeg Jets at KeyBank Center. Faceoff is set for 3 p.m. on WGR with the Paul William Beltz Pregame Show starting at 2 p.m. with Joe DiBiase.