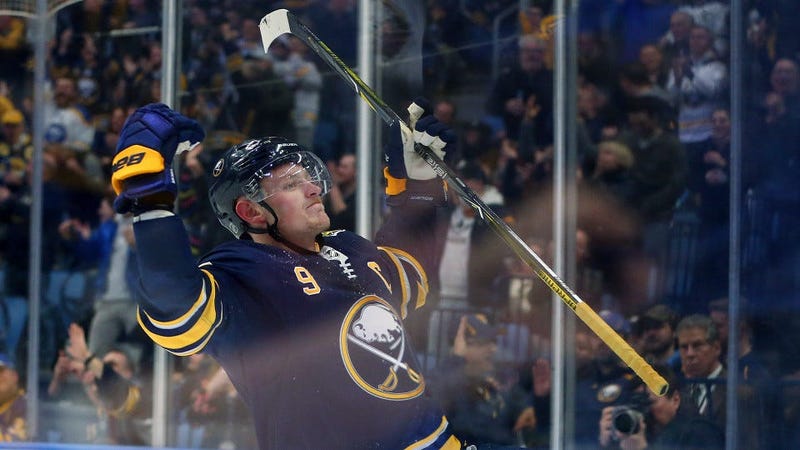 The Buffalo Sabres took care of a tough Western Conference opponent on Tuesday night as they defeated the Vegas Golden Knights by a final score of 4-2 at KeyBank Center.

Sabres captain Jack Eichel came in the clutch again for Buffalo as his third period goal helped put the team ahead 3-2 and in the driver's seat. He also added a second period assist to help extend his current point streak to eight games.

Sam Reinhart was a factor in three of Buffalo's four goals on the night, finishing the night with a pair of assists and a power play goal in the second period.

Neither team was unable to find the back of the net in the first period, though the Sabres dominated the majority of play as was evident by their 13-4 shot advantage.

Rasmus Dahlin created a couple of good scoring chances for himself and his teammates; so too did Michael Frolik and Colin Miller. The duo skated down on a developing 2-on-1 while the teams skated 4-on-4. Frolik fed Miller across the crease in front of Vegas goaltender Marc-Andre Fleury, but Miller tapped the puck wide of the net.

The Golden Knights opened the scoring with 1:55 gone in the second period as a puck ever-so softly slid over goal line past goalie Linus Ullmark. Vegas forward Chandler Stephenson attempted a cross-crease pass to forward Tomas Nosek, but the pass attempt was broken up. Despite the play being snuffed, the puck still found a way to hit Nosek's skate and deflected into the net to give the visitors the 1-0 advantage.

The Sabres found the equalizer just minutes later on the power play when Kyle Okposo fired home his fifth goal of the season. With Golden Knights forward Max Pacioretty in the penalty box for interference, Sabres forward Conor Sheary stripped William Karlsson in the Vegas end, which helped Reinhart set up Okposo for a wrist shot past Fleury for his first power play goal of the season.

It looked like the 1-1 tie would hold through 40 minutes of play, but then the Golden Knights took a too many men on the ice penalty within the final minute of the period. With just 19 seconds left on the clock, Reinhart ripped a wrist shot past Fleury to finish off a nice passing play with Eichel and Rasmus Ristolainen and help give Buffalo their first lead of the night, 2-1.

Vegas had a quick response to Buffalo's go-ahead goal with another goal within the first two minutes of a period.

Sabres defenseman Colin Miller took a double-minor for tripping and unsportsmanlike conduct against his former team at the 1:36 mark of the frame, and the Golden Knights made Miller and the Sabres pay just seven-seconds into the man advantage. It was forward Reilly Smith who fired a wrist shot past the blocker of Ullmark to pot his 19th goal of the season to even the game at 2-2.

Buffalo hunkered down in the next two minutes and was able to kill off Miller's second penalty to keep the game tied.

The back-and-forth affair continued when Eichel gave the Sabres the lead once again, thanks to a dazzling move on defenseman Shea Theodore.

With 7:57 gone in the third period, the Sabres intercepted an errant pass from Vegas in the Buffalo end. The puck made its way to Eichel, who turned on the burners and developed a 2-on-1 chance with Zemgus Girgensons against Theodore. As Eichel closed in on the net, he slipped the puck under Theodore's stick and then cut in towards Fleury to beat him over the right leg for his 28th goal of the season.

Eichel's 28th goal matches his career-high set just last season in 77 games, and he still has 35 games ahead of him to improve upon that total.

Curtis Lazar put the icing on the victory with an empty-net goal in the final minute of play. The Sabres had to weather a difficult late-game surge from the Golden Knights with Fleury on the bench for the extra attacker.

The Sabres head back on the road on Thursday to take on the Dallas Stars at the American Airlines Center. Faceoff is set for 8:30 p.m. with the Paul William Beltz Pregame Show starting at 7:30 p.m. with Brian Koziol on WGR.