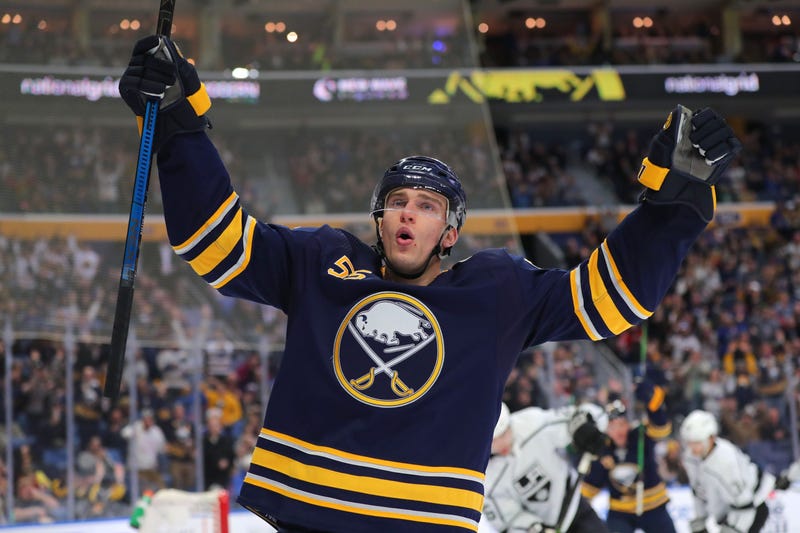 The Buffalo Sabres snapped a three-game losing skid on Saturday afternoon thanks to a 3-2 win over the Los Angeles Kings in front of the home crowd at KeyBank Center in Buffalo.

After missing Thursday night's 6-1 loss to the Philadelphia Flyers, Sabres captain Jack Eichel was able to return to the lineup on Saturday, and while his 17-game point streak in consecutive games was snapped, he did add an assist in the third period to up his personal point streak to 18 games.

Meanwhile, the Sabres used a pair of second period goals from defensemen Rasmus Ristolainen and Marco Scandella to take the lead heading into the third, and then Victor Olofsson got the game-winner with 1:33 remaining when he scored into an empty Los Angeles net.

The first period was a relatively quiet 20 minutes for both teams, where they traded power play opportunities towards the end of the period, but to no avail. The Kings were able to outshoot the Sabres, 10-6, but the score remained even at 0-0.

The Sabres found themselves trailing the Kings early in the second period on a goal from forward Adrian Kempe. Kempe scored after being uncovered in the slot 1:32 into the period as he ripped a wrist shot over the shoulder of Sabres goalie Linus Ullmark and in.

However, Buffalo responded a little more than six minutes later as Ristolainen was able to put in a Jeff Skinner rebound off to the left of Kings goalie Jonathan Quick to tie the game at 1-1. The Sabres defenseman ended up jumping in on the offense as Skinner cut out to the front of the net for a shot. After his initial rebound was stopped, the secondary rebound went right to Ristolainen, who burried his third goal of the season.

The Sabres grabbed the lead for the first time on the night with 3:12 left in the period as Scandella scored on a blast from the point. Scandella was credited for his third goal of the season that ended up going off the leg of defenseman Drew Doughty in front of Quick and in.

The score remained 2-1 after 40 minutes of play, with the Sabres outshooting the Kings in the period, 11-10.

Buffalo carried its lead deep into the third period when the Kings decided to pull quick for an extra attacker. However, the Sabres were able to up their cushion to 3-1 as Olofsson scored into an empty net to make it a 3-1 game. The play started when Eichel moved the puck along the boards to Reinhart, who then moved the puck up to Olofsson for the goal. The goal was Olofsson's 16th goal of the season, which continues to lead all rookies.

The Kings had some fight left in them late as Dustin Brown got the game back to within one goal with under a minute left to play. However, that would be all that the Kings could muster in the dying seconds of the game as the Sabres held on for the 3-2 win.

Ullmark was very good in net for Buffalo, making key saves in the second and third period on high-danger chances. He stopped 25 of 27 shots and picked up his 11th win of the season.

The Sabres now have 41 points on the year, and are alone in second place in the Atlantic Division.

The Sabres will will travel to Ottawa on Monday night to face the Senators at the Canadian Tire Center in Kanata, Ontario. Faceoff is set for 7:30 p.m. with the Paul William Beltz Pregame Show with Schopp and the Bulldog starting at 6:30 p.m. on WGR.