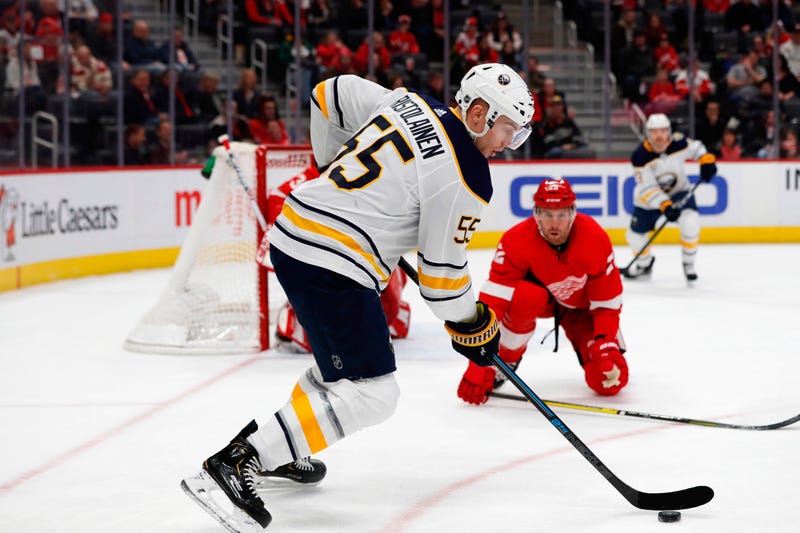 The Buffalo Sabres scored early and often on Sunday in Detroit, Michigan as they came away victorious on the road by a 5-1 score over the Detroit Red Wings at Little Caesars Arena.

With the win, Buffalo snaps a six-game road losing streak dating back to Dec. 14. The team's first loss of the streak came against the New York Islanders at the Nassau Veterans Memorial Coliseum.

The Sabres got things going 2:39 into the contest when forward Curtis Lazar drove through the Red Wings' zone, and fed linemate Evan Rodrigues for the forward's first goal of the season. It was the first time since March 17, 2019 that Rodrigues had found the back of the net.

Less than a minute after Buffalo opened the scoring, Jack Eichel skated through the Detroit defense and drew a slashing penalty from veteran defenseman Mike Green. From there, the Sabres' power play, who entered the game with just two goals on their last 23 attempts, went to work.

Exactly at the 5:00 mark of the opening period and with 25 seconds left in the man advantage, Rodrigues struck again for his second goal of the game as he was able to stuff a puck past goalie Jimmy Howard on the short-side. Assisting on the play were defensemen Henri Jokiharju and Brandon Montour.

The Sabres had already posted an even strength and a power play goal, and with 7:17 left in the first, they added a shorthanded marker to make the score 3-0.

With the Red Wings on a power play of their own with defenseman Zach Bogosian in the penalty box for boarding, a puck was coughed up at the blue line by forward Robby Fabbri, allowing Zemgus Girgensons to skate in alone on Howard. Girgensons was able to get Howard to go one way, which allowed him to tuck the puck around his right leg and in for his eighth goal of the year and Buffalo's third shorthanded goal of the season.

That score stood until the 11:56 mark of the second period when Detroit found themselves a goal to ruin another potential shutout bid for goalie Linus Ullmark. It was defenseman Madison Bowey whose shot from the point snuck through a screen and past the Sabres goaltender to make it a 3-1 contest.

Detroit thought they had closed the gap to 3-2 later in the period, but Montour and Bogosian combined to help their goaltender out in the Buffalo crease. After a point shot from Green was re-directed in front of the Buffalo net by forward Luke Glendening, the puck began to trickle towards the goal line under Ullmark. Red Wings forward Darren Helm attempted to poke the loose puck in, but he got tied up by Montour and failed to get a piece of the puck. As bodies started to fly in the crease, Montour was able to sweep the puck away from the line with his glove, and then Bogosian came in and kept the puck out of the net with his hand on a second attempt by Glendening.

Although the Red Wings came out of the period looking like the better team and outshooting the Sabres 11-3, they only got one goal on Buffalo through 40 minutes of action.

Buffalo made it a 4-1 contest early in the third period of play as Bogosian controlled the puck at the right circle, danced towards the slot and let loose a backhand through traffic that beat Howard. Like Rodrigues earlier in the game, Bogosian scored his first goal of the season, and it was his first since March 7, 2019.

Also on the play, Michael Frolik received a secondary assist, giving him his first point with the Sabres since being acquired from the Calgary Flames on Jan. 2.

The lead quickly became 5-1 when defenseman Rasmus Ristolainen gave Buffalo its second power play goal of the night. With Green in the penalty box again for Detroit, Ristolainen was able to muscle a puck past Howard and over the goal line for his fifth goal of the season.

Eichel was given the primary assist on the power play tally, which extended his current point streak to a seventh game.

From there, Buffalo was able to limit Detroit's chances in the final moments of the game, and Ullmark was able to come away with a 21-save win for his 14th win of the season.

The Sabres return to Buffalo to host their final home game before the All-Star Break on Tuesday night against the Vegas Golden Knights at KeyBank Center. Faceoff is set for 7 p.m. with the Paul William Beltz Pregame Show starting at 6 p.m. on WGR with Mike Schopp and the Bulldog from (716) Food and Sport.