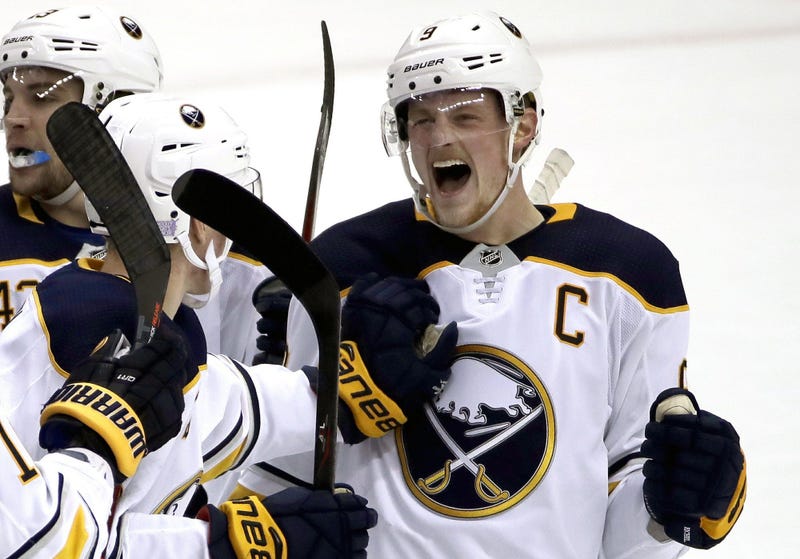 Those numbers are very good, but they certainly aren’t elite or generational. Eichel knows that and plans to be much better has he goes on, “I took a lot of shots, it’s honing in and bearing down on your chances.

“Looking back I could probably name 15 or 20 Grade-A’s this year that I’d like to have back that probably makes me a 40-goal scorer and 100 points, so there’s some things I’ve noticed in my game that I think I can get better at. I think I took some strides this year.”

Eichel got hurt midway through the season and then came back and had to play through it. He said, “Dealing with that I think it lingered a little bit and when things aren’t going well, it takes a toll and it wears on you, but I want to be an elite player in this league and I want to be the best, so there’s a long way to go obviously. There’s a lot of really good players in this league, but I think I can be there with them, so I look forward to having a really, really good offseason and do my best to be the best player I can be next season.”

At age 21, Eichel was made captain of a NHL team. This is clearly his team and Jason Botterill thought the time was right. Eichel said there was good and bad in his first year as the team leader, “There were a lot of ups and downs for sure and I think I really learned a lot, there’s a lot I can take from this season.

“It was a lot to handle and I just leaned on the guys around me, I really leaned on Kyle [Okposo] and [Zach Bogosian] a lot. I mean they’re older guys, they’ve been doing it for awhile, so more than anything I just try to be myself every day, try to bring a good attitude, I try to work hard at practice.”

Eichel lets his emotions get the best of him at times, especially as losses start piling up. He said, “I think I did a lot more listening, just trying to see where guys are, feel situations out. In the past I was more of an act right away, maybe act off emotions, and I think I tried to see people in the light of where they were coming from and just listen, take a step back and I think it was good for me.

Eichel was the first to defend Phil Housley when the team pulled a no-show on Long Island. Eichel said it’s sad Housley had to pay the price when it was the players fault, “It’s on us, it’s on us in the room. We’re the product on the ice. It’s unfortunate that had to happen because Phil’s not the one playing the games and it’s on us as players to be better on the ice every night. The product on the ice hasn’t been good enough and it falls on nobody but ourselves.”

“There were spurts of good hockey and there were spurts of some really, really good things and there’s some things to be happy about, but consistently it wasn’t there enough and you can see it with the fact that we didn’t win two games in a row until the end of the year.”

Eichel feels bad that the fans have had to endure eight years without playoffs. He said, “At times it really got buzzing and even through all the tough times we went through, I think it says a lot that they were there consistently for us.

“The last home game of the year they come in and they really captured the attention of us as players in the room with the atmosphere and they way they gave [Jason Pominville] a standing ovation, It’s a city that loves us and they care so much and have such a positive outlook on our team even through the tough times and I think it just says so much about the people here.”

Tuesday is the NHL Draft Lottery in Toronto. Buffalo right now has the fifth overall pick, but the lottery is held for the first three positions in the draft, so they could fall to eighth or go up to the overall pick.

Ottawa traded away the first overall pick with the best lottery odds to Colorado in the Matt Duchene deal. The Senators never signed him and traded him to Columbus for a first round pick this season, a conditional first rounder in 2020 if he signs with the Blue Jackets, former third round pick Vitaly Abramov and former sixth round pick Jonathan Davidsson.