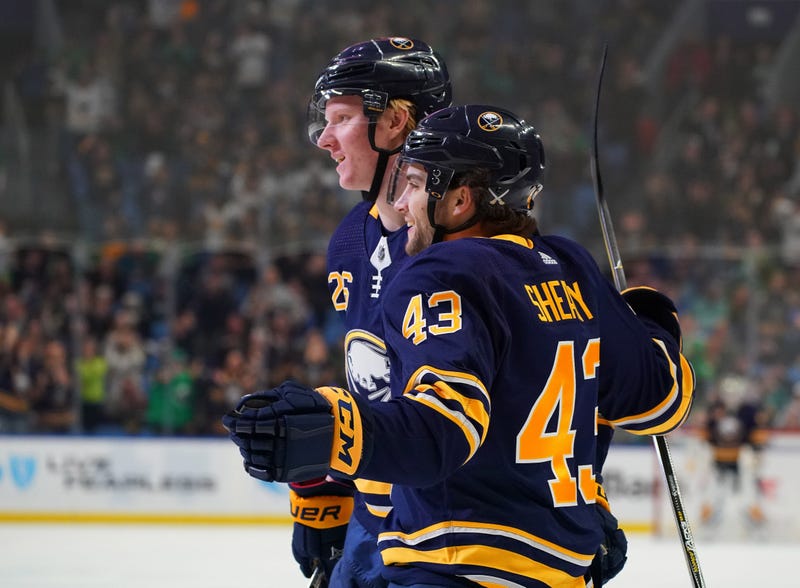 The Buffalo Sabres snapped their seven-game losing streak on Sunday night, taking down Ryan O'Reilly and the St. Louis Blues, 4-3 in a shootout at KeyBank Center.

Alex Nylander had two assists in the winning effort, good for his first-ever multi-point game. The core of this Sabres team then came up big for Buffalo in the shootout as Jack Eichel and Sam Reinhart scored in rounds one and three, respectively, to best the Blues in the shootout.

The Sabres got the scoring started less than seven minutes into the opening period. At the 13:18 mark, Zach Bogosian fed a puck to Johan Larsson, and the veteran winger was able to put the puck behind Blues netminder Jake Allen for the 1-0 lead. It was Larsson's sixth goal of the season.

Buffalo's early advantage was short-lived as just over two minutes later, winger Patrick Maroon potted the tying tally past Carter Hutton to knot things up at 1-1.

The home side would re-claim the lead at the 14:48 mark of the first, courtesy of Evan Rodrigues. Rodrigues was able to score a nifty goal from his knees, after stumbling on his way into the slot. He was still able to get enough on his shot to beat Allen low past his left pad, and netted his first goal in 18 games. Alex Nylander received a primary assist on the score for his first point this season since his recent call-up from the Rochester Americans.

Buffalo would take that 2-1 lead into the first intermission, but they would start the second period on the penalty kill as defenseman Brandon Montour was pegged with a hooking minor as time expired.

Montour's penalty was killed off by the Sabres to kick off the second period, and minutes later, the team doubled their lead to two goals. Rasmus Dahlin fired a beautiful breakout pass up to Nylander, who skated stride-for-stride with Conor Sheary on a 2-on-1 opportunity. Nylander dished the puck off to Sheary, who went against the grain from the left wing and beat Allen high to the right side. The goal was Sheary's 13th goal of the season to put Buffalo up 3-1.

Just before the midway mark of the second period, Blues forward David Perron was given an interference minor for taking the stick of Jeff Skinner. The Sabres started up their first power play opportunity of the evening and got some quality chances off during the man advantage, highlighted by a Jack Eichel feed to Skinner who was denied out in front.  After Buffalo's unsuccessful attempt on the man advantage, Perron escaped the penalty box and immediately joined a St. Louis rush into the Buffalo zone. Perron then used teammate Tyler Bozak as a screen, and sniped the top-left corner on Hutton to make it a 3-2 contest with 12:15 to play in the second.

With 11:19 left in regulation, St. Louis tied the hockey game up as Brayden Schenn scored off a rebound from former Sabres forward Ryan O'Reilly. With goalie Carter Hutton down and out of his crease, Schenn took the puck and wrapped it around the net for his 14th of the season.

The score remained 3-3 as time expired in regulation, and the five-minute overtime was still not enough to settle the score.

Eichel scored to open Round 1 for the Sabres, but the score was quickly evened by Bozak. After Sheary and Perron missed on their chances in Round 2, Reinhart would put Buffalo back in front in Round 3 with a backhand goal on Allen. With him needing to tie the score in the shootout, O'Reilly missed on his chance as he rang his shot off the cross bar and out. The Sabres escpaed the matchup with the 4-3 shootout win to snap their seven-game skid.

The Sabres have another home contest coming up on Wednesday night against the Toronto Maple Leafs at KeyBank Center. Join Mike Schopp and the Bulldog for the Paul William Beltz Pre-Game Show at 6 p.m. from (716) Food and Sport, ahead of puck drop just after 7 p.m. on the home of the Buffalo Sabres - WGR Sports Radio 550.