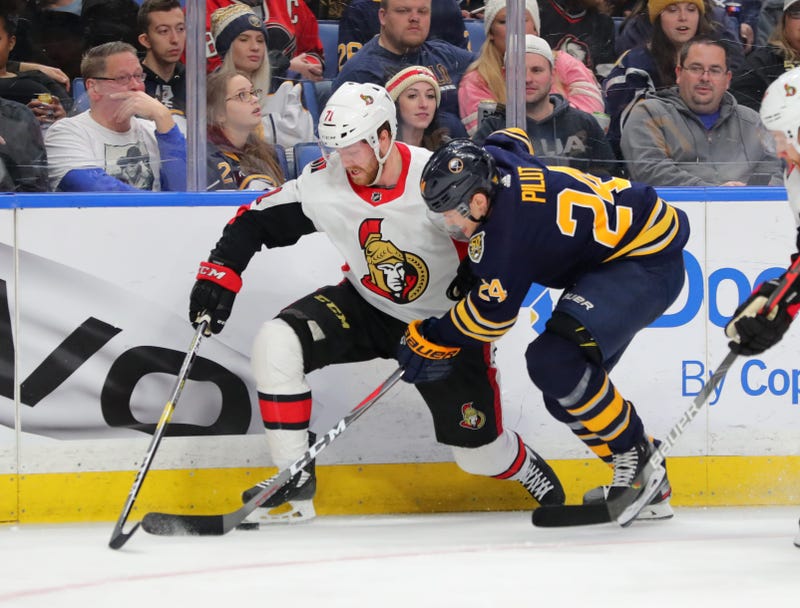 It was a less-than ideal start to a crucial homestand for the Buffalo Sabres, as they fell to the Ottawa Senators, 5-2 on Tuesday night at KeyBank Center.

While the Sabres got goals from Jack Eichel and Sam Reinhart in the loss, Buffalo's penalty kill failed to come up in the clutch, giving up three Senators power play goals.

The visitors grabbed the early first period lead with Rasmus Dahlin in the penalty box for high-sticking. With just over 10-seconds left in the Senators' man advantage, forward Jean-Gabriel Pageau was able to tap in a nice spin-around pass from defenseman Thomas Chabot past Linus Ullmark to give Ottawa a 1-0 lead.

The Sabres knotted the score at 1-1 on a power play of their own later in the opening period when Reinhart was given a gift in front of the Ottawa net. With defenseman Mike Reilly in the box for the Senators, Marcus Johansson skated into the corner and was checked off the puck by defenseman Nikita Zaitsev. The loose puck found the stick of defenseman Ron Hainsey, but he mistakenly dished the puck to Reinhart, who scooted it under goaltender Craig Anderson for his 18th goal of the season.

Ottawa re-claimed the lead less than five minutes into the second period when former Sabres forward Tyler Ennis found the back of the net on the man advantage. With Jeff Skinner in the box for an interference minor, forward Drake Batherson found Ennis sneaking in the back door and snapped a shot short-side past Ullmark to give the Senators a 2-1 lead.

The Sabres had an answer nearly four minutes later when some hard work from Zemgus Girgensons helped keep the offensive zone possession alive. Girgensons eventually got the puck to defenseman Brandon Montour, who's shot towards Anderson was deflected by Girgensons, causing Anderson to have difficulty covering the loose puck. It was Eichel who was able to locate the loose puck and muscle in his 29th goal of the season.

The goal established a new career-high for Eichel, breaking the mark he set last year in 32 fewer games.

That 2-2 score ended up holding through 40 minutes of play, despite Ottawa holding a 31-15 shot advantage over Buffalo.

The Senators went to work on their third power play opportunity of the night with exactly eight minutes gone in the third period when Sabres forward  Michael Frolik was called for a confusing roughing minor after he and Johansson could not capitalize on an odd-man chance.

43-seconds into the man advantage, defenseman Mike Reilly accepted a drop pass from Ennis and blasted a point shot past Ullmark for the defenseman's first goal of the season.  With the goal, Ottawa was a perfect 3-for-3 on the power play. Coming into the contest, the Senators owned the worst power play in the National Hockey League.

Things got worse for the Sabres moments later when Ullmark collapsed in his crease after trying slid post-to-post and got his right leg caught up under his body. The Sabres netminder had to be helped off the ice by teammates, forcing Carter Hutton into a relief appearance for the final 9:32 of play.

The Sabres had a golden opportunity to tie the game late on a power play, but instead allowed a shorthanded goal to Senators defenseman Mark Borowiecki. He was able to clear the puck out of his zone after blocking a shot from Johansson, and his attempt bounced off the boards and into an empty Buffalo net to double the Ottawa lead to 4-2.

The Senators added another empty-net goal in the final seconds of play courtesy of defenseman Nikita Zaitsev to wrap things up, 5-2.

The Sabres continue their five-game homestand on Thursday evening when the Montreal Canadiens come to downtown Buffalo. Puck drop at KeyBank Center is set for 7 p.m. with the Paul William Beltz Pregame Show starting at 6 p.m. on WGR with Mike Schopp and the Bulldog from (716) Food and Sport.