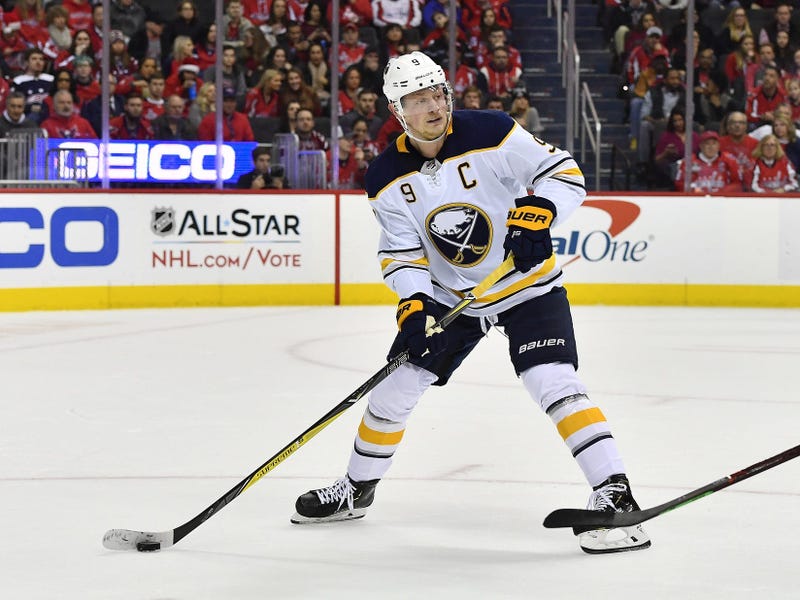 At first, Buffalo Sabres captain Jack Eichel did not take to the ice on Monday morning for practice with his fellow teammates at KeyBank Center. However, about 20 minutes later, Eichel jumped on the ice and joined the rest of the group as they prepared for Tuesday night's matchup with the New Jersey Devils.

The 22-year-old center did not take part in any line rushes once he joined his teammates, but did get to work in a bit on a defensive pairing with Nathan Beaulieu and Scott Wilson. He also got the chance to work in late with some power play drills, taking his usual spot right near the faceoff circle to the right of the net.

Eichel said it was great to get back on the ice after missing some time with his injury.

"Obviously it's tough when you're not on the ice," he said after practice. "It's nice to be back at practice and just being around the guys, obviously competing, doing that sort of thing. It was nice."

In the two games without Eichel, the Sabres went 1-1-0 with a win over the Florida Panthers on Thursday and a loss to the Boston Bruins on Saturday. In those two games, the Sabres have managed to be productive, but the team continues to lack in secondary scoring. Both games were decided by a goal, but in neither game did they show signs of dominating the play for any long stretch of time.

While Eichel is itching to get back into game action with his teammates, he knows that he doesn't want to push himself too much with the possibility of setting himself back more.

"I think at this point it's just taking it every day and seeing how I feel," Eichel said. "Obviously it's not a rush, you don't want to put yourself in a bad position. You want to make sure you're comfortable in every situation you put yourself in. [That's] for myself and for the team. I think that's kind of been where it's at now, just seeing how we are each day and trying to progress. If you can just get a little better every day, I think it's a positive. For me, it's been that sort of thing. Everything I can do and try to get back and help the team as soon as possible I want to do, but with that being said, you don't want to rush things and put yourself behind."

When asked about Eichel's status for Tuesday against the Devils, head coach Phil Housley was very brief in saying that he doesn't know if his captain will be ready to dress.

"I think those questions will be answered tomorrow," Housley said. "With him just coming back and getting the O.K. to get into practice was a good sign. We'll know more about that tomorrow."

The Sabres currently find themselves sitting in the final Wild Card spot in the Eastern Conference with a 22-14-6 record and 50 points. Buffalo sits two spots back of the Bruins for third in the Atlantic Division, while they are currently tied with the New York Islanders for the first Wild Card spot. However, the Islanders have two games in-hand on the Sabres, while also winning two more regulation/overtime games.

On Monday, the Montreal Canadiens have the chance to put the Sabres out of a playoff spot with a win or an overtime/shootout loss to the Minnesota Wild on home ice. Montreal is currently one point back of the Sabres with a 22-15-5 record and 20 regulation/overtime wins.

With Buffalo's recent struggles and its decline in the standings, Eichel knows how important each game will be over the next couple of weeks.

"Every game is important. Nothing has changed from the mindset we've had at the beginning of the year," Eichel said. "Every game means a lot for us, and obviously with how tight the race is and everyone seems to be getting points every night in the league, so it's important. You know me, I'm a competitive guy. I like to be out there every night. It kills me not to be out there. It kills me not to be playing, not to be hanging out with these guys every day and competing. I think the hardest part about it is the mental aspect, and we've talked about this for the last few years - just not being able to get out there and do it, but it feels good to practice today, feels good to make strides. I felt good, feeling like myself again. Just want to see what tomorrow brings."

With Eichel out of the lineup over the past couple of games, the onus is to find ways to plug and place players in the lineup to try and find different ways to score. On Monday, the lines were mixed up a bit to try and change something up.

Here is how the lines looked:

Even with Eichel in the lineup, secondary scoring has been a constant issue that continues to be a major concern moving forward.

With the Sabres starting to struggle and fall out of playoff position, now is the time for some players to step up their game and find a way to come away with some wins in the second half of the season.

"Obviously you need that desperation with or without me in the lineup," Eichel said. "Whoever is in the lineup at that time - you can see how tight of checking the games have become, and it's that second half of the year. Everyone is trying to push towards a spot. I think for us, it's just about every day coming in and trying to get better work and preparing ourselves for the next game. There's so many ups and downs in a NHL season, and it's important for us to try and stay even-keeled, and narrow our focus as much as we can. For the group in here, it's been pretty positive for us. For the times we've played desperate, we've respected the opponent. We've respected our own end, tried to keep the puck out of our end, and obviously work to get into their zone and get the puck behind their goaltender. It's not an easy league to score in by any means, so it's good that guys are chipping in. We just need more from everyone every night, because every team is bringing more every night. It's getting more and more competitive, and that's just how the season goes. As the season amps up, we have to amp ourselves up too. I think we're ready for the challenge, we just have to commit to that."

Zemgus Girgensons also returned to the ice for the Sabres on Monday after missing the last four games with an upper-body injury. Girgensons said the injury was suffered during the game against the Anaheim Ducks on December 22, but would not disclose what the extent of his injury was.

The 25-year-old was happy to be back on the ice, and is hopeful that he will get the green light to suit up for Tuesday's tilt with the Devils.

"It's never fun to be hurt, sitting out and watching it from the outside," Girgensons said. "It's always nice to get back with the guys on the ice and have some fun.

"I thought I made good progress, I feel good. Definitely a little quicker [recovery] than I thought, so it's all good."

Housley also did not give any clarity on Girgensons' status for Tuesday's game against New Jersey.

"I really liked what Zemgus brought today in practice. It was good to see him back," Housley said. "Those decisions will be made tomorrow."

Not practicing on Monday was Sabres forward Sam Reinhart and defenseman Zach Bogosian. Bogosian was given a maintenance day, while Reinhart was feeling under the weather.

The Sabres will return to the ice on Tuesday for the morning skate at around 10:30 a.m.