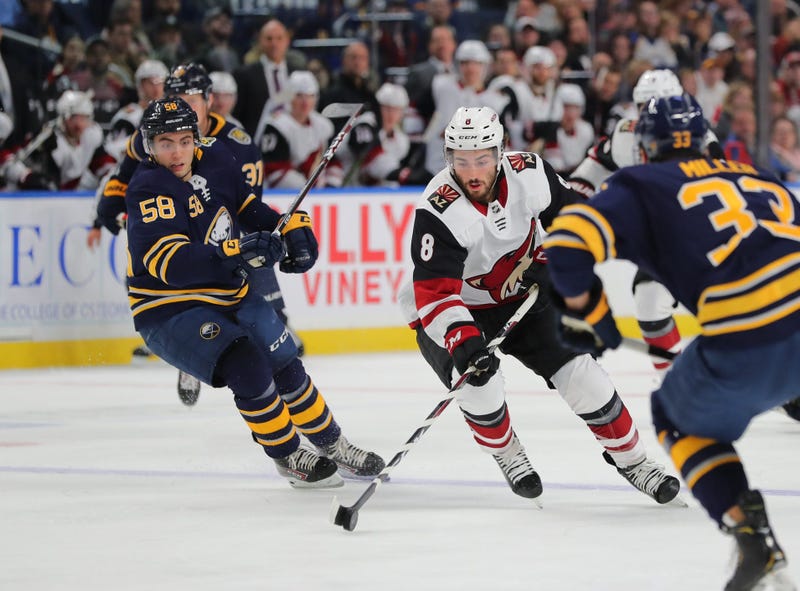 John Gilmour will alternate between forward and defense. Krueger said this is probably a one-game thing, “We’re quite optimistic that somebody will be back on Thursday, but John’s been amazing in the way he’s dealt with being the extra defenseman and when he came in. He played really well and we’re pleased to find another opportunity to bring him into the lineup.”

Between Buffalo and Rochester, the Sabres have eight injured forwards.

Gilmour has played just three games this season, but has been a healthy scratch for the last six. Gilmour said it’s been awhile since he’s been on the wing, “I played a little bit in midget and in summer hockey.”

Many defensemen would be upset that they’re being moved to forward, but not Gilmour, “I’m pretty excited actually. It’s an opportunity to step into the lineup and help the team win, and I think with my skating, I can get up the ice and back and I check well.”

The overall team success hasn’t been much lately as the Sabres have lost seven of eight games, but Jack Eichel’s line has kicked it into high gear.

Eichel has six goals and seven points in his last four games. His 13 goals has him ranked sixth in the NHL, while Eichel’s 24 points ranks him 13th.

The Sabres' power play hasn’t scored in seven games, going 0-for-18. They’ve fallen from first in the NHL down to 11th.

Linus Ullmark gets the call in goal. He won his last start on Saturday, stopping 21-of-23 shots against Ottawa.

The Sabres have 23 points, which is fourth in the Atlantic Division; two behind Florida and three back of Montreal.

Minnesota is dead last in the NHL with 16 points. Lately, the Wild have gone win one, lose one for the last six games.

Zach Parise has heated up lately with six points in seven games.

Kevin Fiala had a horrible start to the season, picking up one point in eight games. Since then, he has four goals and six points in seven games.

Minnesota has not gotten good goaltending this season. Devan Dubnyk has played in Minnesota’s last five games and seven out of eight. In those seven games, he’s given up 19 goals.

Join Schopp and the Bulldog for the pregame live from (716) Food and Sport starting at 6:00 when they’ll be joined by Krueger, Reinhart, Miller and Gilmour.