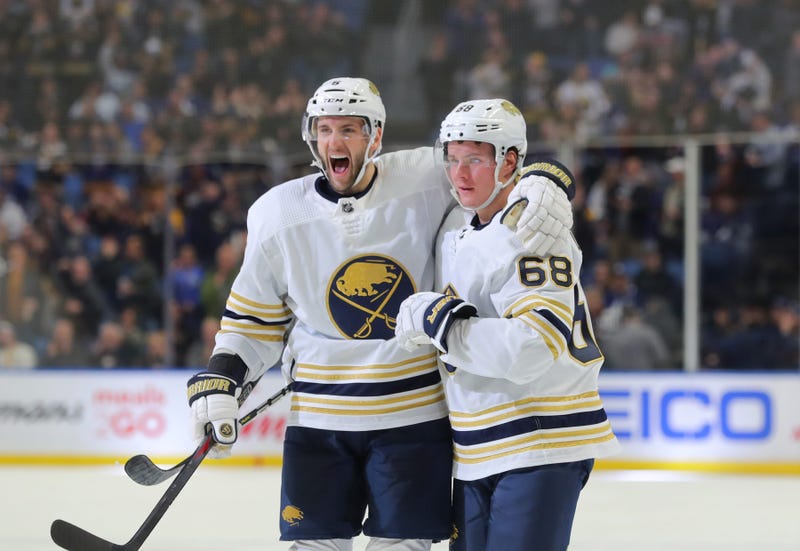 Following a 3-2 overtime loss to the Calgary Flames on Wednesday night at KeyBank Center, the Buffalo Sabres responded with a 6-4 win over the Toronto Maple Leafs on Friday afternoon in Buffalo.

Buffalo used a four-goal second period to help take control of the game with goals from Jeff Skinner, Jack Eichel, Casey Mittelstadt and Victor Olofsson. In the third period, Jimmy Vesey scored the eventual game-winning goal to give Buffalo the support they needed.

Linus Ullmark was very good in goal for the Sabres once again, stopping 25 of 29 shots faced for his sixth win of the year.

Friday's game was the first game of a home-and-home series with the Sabres and Maple Leafs, with the second game coming on Saturday night at Scotiabank Arena in Toronto.

The Sabres and Leafs each exchanged chances in the opening 20 minutes with both teams getting some glorious scoring chances.

Olofsson had a number of good scoring chances in the first period, picking up three shots on goal. One shot ended up going off the glove of goalie Michael Hutchinson and just wide of the Toronto net.

Eichel had some good chances of his own in the first period as the Sabres captain registered four shots on Hutchinson.

As for Maple Leafs forward William Nylander, he had two great scoring chances in the period that Ullmark turned away with the glove hand. Nylander's first chance was on a breakaway in alone on Ullmark, and the second chance was a nice scoring chance from just inside the faceoff circle.

Toronto was able to break the scoreless tie with 1:06 remaining in the period as a failed clearing attempt in the Buffalo zone ended up in the back of the net. After Sabres forward Marcus Johansson could not get the puck out of harm's way, Maple Leafs forward Ilya Mikheyev found a wide-open John Tavares to the left of Ullmark and the Toronto captain fired home his eighth goal of the year.

The period ended with the Sabres holding a 13-12 advantage in shots, but trailing 1-0 on the scoreboard.

The Maple Leafs were able to extend their lead to 2-0 just 1:21 into the second period as Tavares notched his second goal of the game. After a bad giveaway my Johansson in the offensive zone, Toronto turned the chance into an odd-man rush the other way. Tavares got free for a chance alone on Ullmark, but his original shot was put wide of the net. The puck then bounced right back to the Buffalo netminder, but he failed to cover the puck in time and Tavares poked it off Ullmark's leg and in.

From there, the Sabres took control of the period and responded with four unanswered goals to take the lead.

The first goal came from Skinner a little more the than four minutes after the Maple Leafs took the two-goal lead. After Sabres defenseman Brandon Montour made a nice play to keep the puck in the offensive zone at the blue line, he eventually got the puck to forward Johan Larsson, who dropped it back to Skinner for a wrist shot that beat Hutchinson on the glove side.

Nearly four minutes later, Buffalo tied the game as Eichel found the back of the net for his team-leading 15th goal of the season. After coming out of the penalty box, Eichel gathered a loose puck outside of the Buffalo blue line and started a 2-on-1 rush with Johansson. He then decided to shoot the puck and his wrist shot got behind Hutchinson and in to even the game at 2-2.

Jack Eichel out of the box, rips one past Hutchinson. 2-2 #sabres50 #leafsforever pic.twitter.com/tiylk8Y6ZN

Buffalo grabbed its first lead of the night almost two-and-a-half minutes later as Mittelstadt was able to get a piece of a Marco Scandella shot from the point that found its way back behind the Leafs netminder. For Mittelstadt, it was his fourth goal of the season and his first goal in 17 games.

The Sabres added to their lead with 1:06 remaining in the period as Eichel went to work in the Toronto zone, which eventually opened up some space for Olofsson inside the left faceoff circle. The Sabres winger was able to then wire a wrist shot over the near side, glove hand of Hutchinson to up Buffalo's lead to 4-2.

The Sabres controlled the last 15-plus minutes of the second period, and ended up out-shooting the Maple Leafs in the period, 13-6.

Toronto got one back to start the third period as the Maple Leafs caught the Sabres on a long shift and it resulted in a one-time feed from forward Jason Spezza to forward Dmytro Timashov. Timashov's shot beat Ullmark on the glove side with his shot for his second goal of the season.

However, the Sabres quickly regained their two-goal lead just 1:44 later as Toronto turns the puck over in front of its own net to Vesey. The Sabres forward tried to make a move to the backhand, but still got enough on his chance and the puck crawled through the five-hole of Hutchinson to make the score 5-3. It was Vesey's third goal of the season, as well as his third goal in as many games.

Jimmy Vesey cashes in on a turnover. 5-3 #sabres50 #leafsforever pic.twitter.com/32wM25lkiw

Kasperi Kapanen got the Maple Leafs back to within one with 7:50 to go in regulation as he escaped the defense of Montour in front of Ullmark and slides a puck past his left leg to make it 5-4.

The Maple Leafs continued to put pressure on the Sabres in the Buffalo end, but Ullmark was on top of his game. With time running down in the third, Maple Leafs forward Auston Matthews had a chance to tie the game at 5-5, but the Sabres goalie got across and turned his shot away with the glove hand.

Eichel put the game on ice with 27 seconds remaining in regulation as he grabbed a loose puck in his own end and sent it the length of the ice and into the empty Toronto net. Eichel's second goal of the game was his 16th of the year.

The Sabres conclude their home-and-home series with the Maple Leafs on Saturday night at Scotiabank Arena in Toronto. Faceoff is set for 7 p.m. on WGR with the Paul William Beltz Pregame Show starting at 6 p.m. with Brian Koziol.