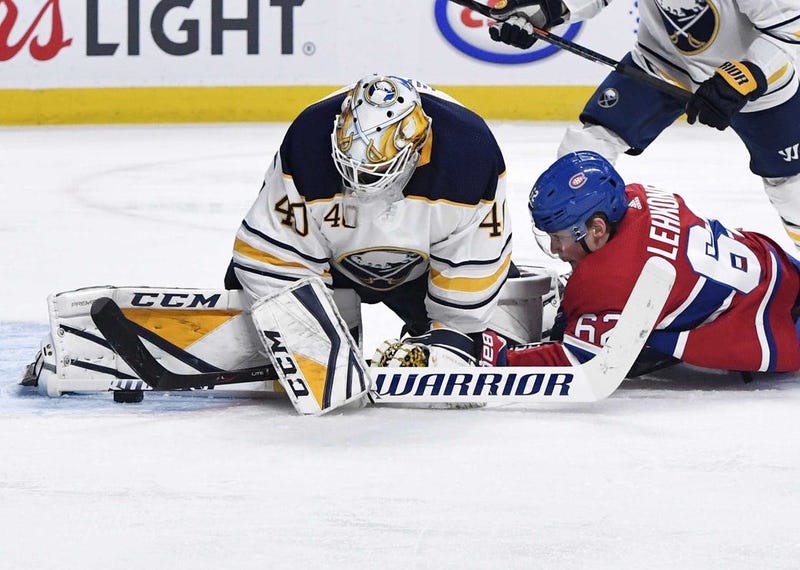 April 22, 2019 04/22/2019 7:38 pm
Buffalo, NY (WGR 550) - In the last half of the season, Carter Hutton had trouble talking after games. It didn’t matter if he played well or played poorly, the results seemed to be the same. I could tell the frustration was wearing on him and he said, “There’s a lot to reflect on, a lot to learn from and there are some positives to take away, but it’s frustrating. We want to be playing hockey this time of year.”

Through the Sabres' 10-game winning streak, Hutton went 12-6-1 with a 2.50 goals-against and .920 save percentage. Afterwards, he was 6-19-4 with a 3.32 goals-against and .900 save percentage. Hutton said, “For me I wish I could’ve played better and did my job right because we’d be winning here and we’d still be playing and we wouldn’t be talking about this stuff, we’d be getting ready for the playoffs.”

Hutton’s numbers went down, but so did many other players. Hutton said, “I thought during the middle I lagged out a little bit, I didn’t think I played my best hockey.

“I think there was a game against Chicago where I got pulled here at home and I was trying to do too much at that point, I just reset myself and then I played that game in Tampa Bay where we lost in the shootout and I thought from then on, I played a lot of good hockey and I wasn’t even getting results, but I tried to control what I could.”

Including that Lightning game, Hutton played 15 games going 3-8-2 with a 3.38 goals-against and .906 save percentage.

“At times we showed our potential, but we need to assess what went wrong and why it didn’t continue that upward trend that we were on.”

Hutton played for Nashville when Phil Housley was an assistant coach there. He said he had no issues with Housley as a head coach, “I thought Phil was a great communicator and did a really good job of preparing us to play and a lot of it falls on the players in this room, we go out there, we go out and play the games.

Accountability was a big topic for the players after the season ended. Hutton would like to see more of it, “Yes I think so. I think we have a lot of good leaders here that do a good job, but I think self accountability too. A lot of guys need to be harder on themselves. Coaches need to hold you accountable and your peers, but at the same time, I think guys need to be hard on themselves, that’s how you improve and I think a lot of guys at times struggled with that.

“I think everybody needs to do some big time self assessment.”

I had wondered for maybe the final two months of the season if Hutton regretted signing with Buffalo. He said, “I came here because I trust in Jason and I trust where this is headed and nothing goes unwatched here so you just hope everything is going to move in the right direction and I feel we have trust in him and it’s going to.”

Hutton is under contract for two more seasons, while Linus Ullmark is a restricted free agent this summer.

Ukko-Pekka Luukkonen just finished his first season in the OHL with Sudbury, and the Sabres' second round pick in 2017 is going to play in Rochester next season.

This season’s goaltender in Rochester, Scott Wedgewood, will be an unrestricted free agent come July 1.