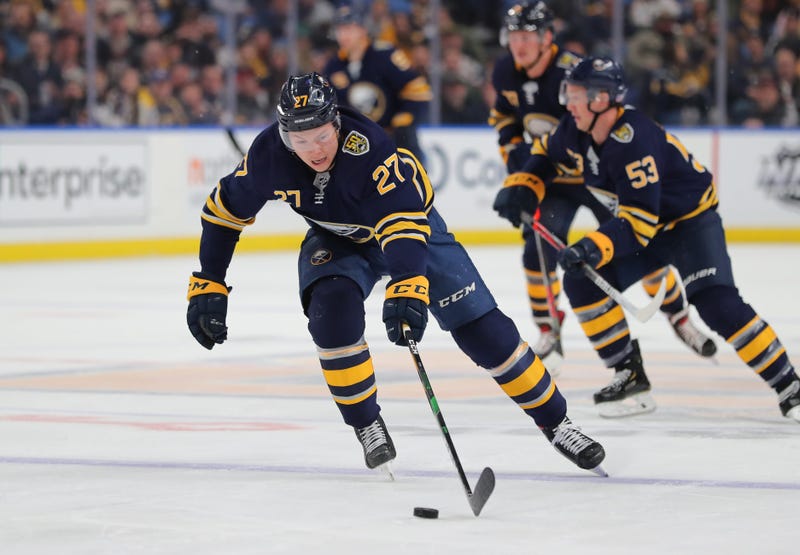 January 20, 2020 01/20/2020 7:34 pm
Buffalo, NY (WGR 550) - Curtis Lazar had a good training camp and should’ve made the Sabres right away. Jason Botterill sent the forward to Rochester because he brought back too many players that didn’t need to be here.

Lazar went to the Amerks and played 18 games, netting six goals and eight assists for 14 points. In Buffalo, he does so many things during a game that others either can’t or won’t do.

You may have noticed that as the Sabres are on break, and three players were sent to back to Rochester. Lazar wasn’t one of those players. That’s a clear sign that Ralph Krueger appreciates what Lazar brings. The head coach said, “Curtis is a different look up the middle with the size that he brings. He’s hard to play against and can defend against top lines.”

Lazar is one of the few Sabres that will stand in front of the net. He also drives the goaltenders crazy because he’ll get a piece of them and brush by them, and make it look totally innocent. He's tough along the walls and wins many battles all over the ice. He hits, and does something else not many on this team can do - win faceoffs.

Lazar has won 51.5% of his draws and Krueger said, “He’s working hard on his faceoffs and gives us a powerful right-handed draw, and he’s learning every day to play better within our defensive structure that we want and the principles and the concepts that we need.”

Lazar hasn’t always been good at faceoffs. In 65 games with Calgary two years ago, Lazar only won 39.7% of his draws. It’s a skill he’s worked to get better at, “Last year was the chance for me to hone in on it, and it’s just my will to work there. I take a lot of pride in my faceoffs, but if you look at my recent stats, my faceoffs weren’t that good, but it’s something that I embrace and I like that challenge.”

Despite being a No. 1 pick by Ottawa in 2013, Lazar has never scored more than six goals in an NHL season. He said he now believes in himself more, “I think its confidence. Last year, I spent a year in the American [Hockey] League in more of a scorers role (20 goals in 57 games with Stockton) and it let me tap into that potential again, and now when I get a chance, I’m not rushing my shots or rushing my passes. I see it and I make it.”

Lazar feels his hard work is paying off, “I think it’s coming full circle. I’m in my sixth year pro, and it’s nice to see that all those years and those hard earned miles and games are finally paying off and the game’s starting to slow down.”

It’s funny that in the 19 games that he’s played, his role has already changed. In one game, Lazar even played center for Marcus Johansson and Frolik. He said, “What I showed in training camp, I was just known as the Energizer Bunny, the guy that ran around and almost acted like there wasn’t a puck. But now I’m trying to play composed and play with the puck and if I’m put in a checking role, I embrace it and get a lot of ice-time and it shows the coach’s trust.”

I’ve heard Lazar say at least three times this season that he knows he’s an NHL player. Many fans disagree and aren’t afraid to say so. He said, “In today’s day with the media and social media, everyone’s got an opinion. Sometimes it’s not what you want to hear, but the way to deal with that is don’t hear it and just prove those haters wrong.

“They’re allowed to think what they want of me, but I’m playing in the top hockey league in the world. So I guess I get the last laugh.”

Lazar only signed a one-year contract with the Sabres, but if he plays like he has all season long, Botterill would be wise to offer him a year or two more.